For a class that's rather far outside of my background, I am reading a paper about supply-demand balance in an islanded microgrid. The active power demand of the whole system can be met with renewables, but the authors' control scheme can't balance reactive power, so they say that the conventional generators have to take care of it:

Thus, the active power reference of the SG is set to zero, and the SG
[synchronous generator] only produces reactive power for voltage regulation.

Is that a thing? From dispatch and power flow exercises I'm used to having a minimum active power constraint on the generators.

How do you make, say, a diesel generator produce P=0 Q≠0?

The characteristics of synchronous machines operated as synchronous condensers are presented in most electric machine courses and texts. The V-curves for a synchronous machine are shown below. Ie is the rotor field excitation current and Is is the stator current. The various V-shaped curves show the relationship between stator current and field current for various levels of output power. The bottom curve shows Ie vs. Is for zero power and describes condenser operation. With over-excitation, the machine behaves as a condenser (capacitor). With under-excitation, the machine behaves as an inductor. The intersections of the more vertical curve with the V curves indicate the condition for power factor = 1.0. Curves for additional values of lagging and leading machine power factor are often drawn to the left and right of the 1.0 pf curve. Note that the machine current is limited to a value below the current shown for rated power shown by the top curve. 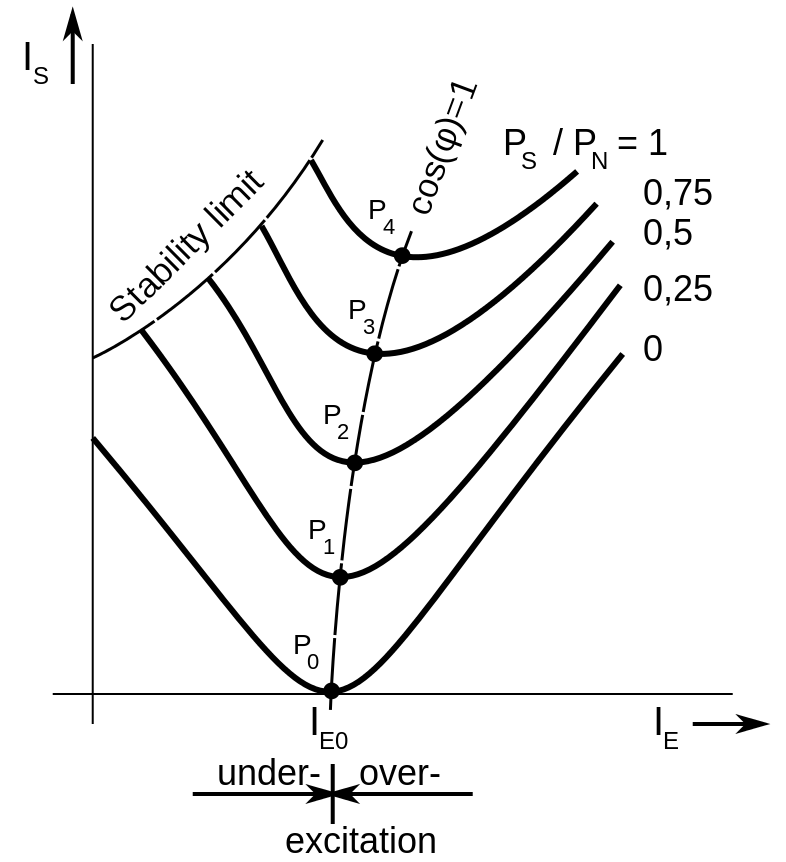 Why does reactive power influence the voltage? Suppose you have a (weak) power system with a large reactive load. If you suddenly disconnect the load, you would experience a peak in the voltage.

First, we need to define what exactly is being asked. Now that you have stated this is regarding a utility-scale power system, not the output of a opamp or something, we know what "reactive power" means. This is a shortcut used in the electric power industry. Ideally the load on the system would be resistive, but in reality is is partially inductive. They separate this load into the pure resistive and pure inductive components and refer to what is delivered to the resistance as "real power" and what is delivered to the inductance as "reactive power".

This gives rise to some interesting things, like that a capacitor accross a transmission line is a reative power generator. Yes, that sounds funny, but if you follow the definition of reactive power above, this is all consistant and no physics is violated. In fact, capacitors are sometimes used to "generate" reactive power.

The actual current coming out of a generator is lagging the voltage by a small phase angle. Instead of thinking of this as a magnitude and phase angle, it is thought of as two separate components with separate magnitudes, one at 0 phase and the other lagging at 90° phase. The former is the current that causes real power and the latter reactive power. The two ways of describing the overall current with respect to the voltage are mathematically equivalent (each can be unambiguously converted to the other).

So the question comes down to why does generator current that is lagging the voltage by 90° cause the voltage to go down? I think there are two answers to this.

I think the real answer has to do with unstated assumptions built into the question, which is a control system around the generator. What you are really seeing the reaction to by removing reactive load is not that of the bare generator, but that of the generator with its control system compensating for the change in load. Again, the inevitable resistance in the system times the reactive current causes real losses. Note that some of that "resistance" may not be direct electrical resistance, but mechanical issues projected to the electrical system. Those real losses are going to add to the real load on the generator, so removing the reactive load still relieves some real load.

The electrical technician has suggested installing a 3 phase capacitor bank to compensate for the “Reactive power” produced by the motors because if not, I may be penalized economically by the local electrical company.

That's all fine and dandy if you are running your appliances all together 24 7 but, in the dead of night, ask yourself, what is that bank of capacitors doing?

Answer - they are taking reactive current that they are hoping would balance the reactive current taken by the motors BUT the motors are not switched on SO, if your utility company can bill you extra for having a poor lagging power factor then they surely will bill you for having a poor leading power factor for all those hours that the laundry is shut.

Maybe the electrician has in mind some clever caps that automatically switch in and out or maybe he means installing several sets so that each only activates when their particular motors start turning? Either way, seek clarification from him and if he falls down at the first hurdle then fire him.