The circuit in question uses the LT4356: 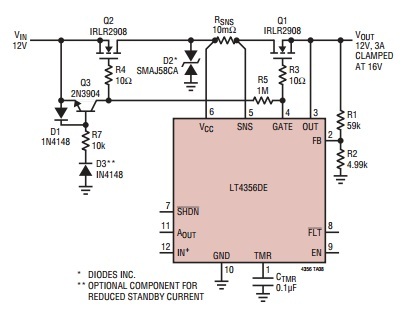 So, I'm trying to get a grip on how this circuit works precisely. I've prototyped the pictured schematic minus everything to the left of D2. So, essentially, no reverse polarity protection… it's just the main IC controlling Q1 to allow power through. That part I understand just fine.

When adding the reverse polarity protection via all that extra stuff before D2, everything get super fuzzy for me. I know Q1 and Q2, based on their datasheet, have body diodes. Thus, I know that when everything is hooked up correctly, Q2 will let power flow and everything past it should work normally. Conversely, I know when polarity is reversed, the body diode will block power flow.

After that, I'm pretty confused. I can roughly reason the operation of D1, Q3, R7 and D3 as a group, but together with the rest of the circuit…. I'm confused on how they work / help the circuit in either a normal or reverse polarity situation.

Anybody able to shed a little light on this for me? 🙂

EDIT: I realized, after some more graph paper and highlighter action, that when there is normal polarity that Vbase will be the same as Vemitter, so Q3 should effectively be off.

I'm still sort of unclear, though… when Q3 starts conducting during a reverse polarity situation… is all it's doing is pulling the gate for Q1/Q2 to ground to stop them from turning on? If so, why even bother with Q3? Q1 would have its body diode to allow enough current to pass to turn things on normally, and otherwise, it would block reverse polarity. Confused on the benefit of Q3 still. 🙁 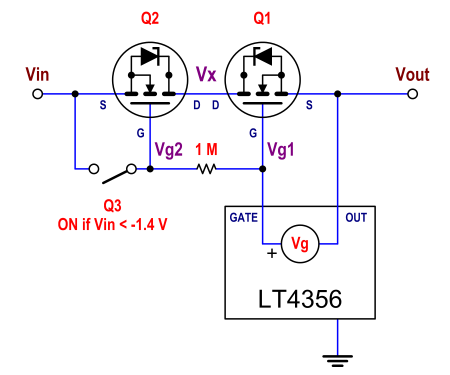 The use of a MOSFET for reverse voltage protection is very straight forward.
Some of your references are correct but of low relevance and are tending to make the problem look more complex than it is. The key requirements (which you have essentially already identified) are

In practice this is easily achieved in most cases.
Vin has little effect on operating dissipation.
Rdson needs to be rated for worst case liable to be experienced in practice. About 2 x headlined Rdson is usually safe OR examine data sheets carefully. Use worst case ratings - DO NOT use typical ratings.

Turn on may be slow if desired but note that dissipation needs to be allowed for.
Turn off under reverse polarity must be rapid to allow for sudden application of protection.

What is Iin max ?
You don't say what I_in_max is and this makes quite a difference in practice.

"If the drain-to-source voltage is zero, the drain current also becomes zero regardless of gate–to-source voltage. This region is at the left side of the VGS– VGS(th)= VDS boundary line (VGS – VGS(th) > VDS > 0).

Even if the drain current is very large, in this region the power dissipation is maintained by minimizing VDS(on)."

Note that these are relatively independent thoughts by the writer. The first is essentially irrelevant to this application.
The second simply says that a low Rdson FET is a good idea.

Does this configuration fall under the VDS = 0 classification? That seems like a somewhat dangerous assumption to make in a noisy environment (this will be operating in the vicinity of various types of motors), as any voltage offsets between input supply ground and local ground could cause current to flow. Even with that possibility, I'm not sure I need to spec for my maximum load current on the drain current ID. It would then follow that I don't need to dissipate very much power either. I suppose I could mitigate the problem by Zener clamping VGS closer to VGS(th) to reduce drain current/voltage?

When Vin is OK get FET turned on asap.
Now Vds is as low as it is going to get and is set by Ids^2 x Rdson
Ids = your circuit current.
At 25C ambient Rds will start at value cited at 25C in spec sheet and will rise if/as FET heats. In most cases FET will not heat vastly.
eg 1 20 milliOhm FET at 1 amp gives 20 mW heating. Temperature rise is very low in any sensible pkg with minimal heatsinking. At 10A the dissipation = 10^2 x 0.020 = 2 Watts. This will need a DPAk or TO220 or SOT89 or better pkg and sensible heatsinking. Die temperature may be in 50-100C range and Rdson will increase over nominal 25C value. Worst case you may get say 40 milliOhm and 4 Watts. That is still easy enough to design for.

I suppose I could mitigate the problem by Zener clamping VGS closer to VGS(th) to reduce drain current/voltage?

No!
Best saved for last :-).
This is the exact opposite of what is required.
Your protector needs to have minimal impact on the controlled circuit.
The above has mjaximum impact and increases dissipation in protector over what can be achieved by using a sensibly low Rdson FET and turning it on hard.

This is a very handy reverse polarity protection scheme.

A P channel MOSFET turns on when \$V_{gs}\$ is negative, probably starting around -3V to -5V. When power is switched on, \$V_{gs}=0V\$. This is where the parasitic diode drawn across the MOSFET in the datasheet comes into play (drawn for explanation purposes only, do not put a diode between the drain and source). It allows current to flow, drain to source, and drops about 1V. 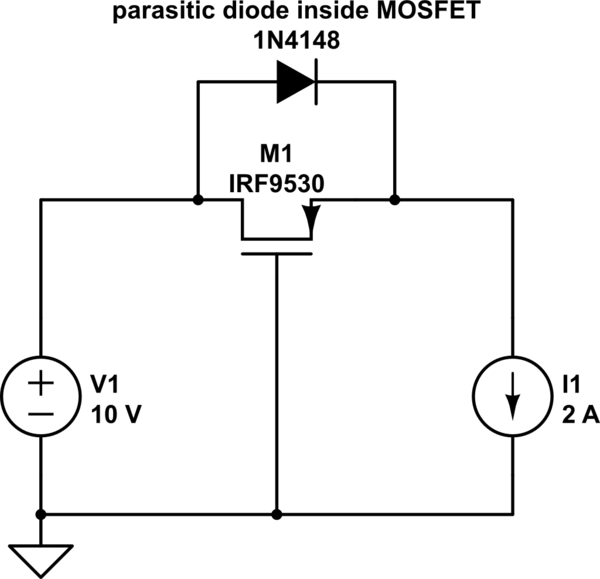 Assuming a supply voltage of 10V:

The MOSFET is driven into saturation. Since the MOSFET's on resistance, \$R_{ds(on)}\$, is around \$25m\Omega\$, the parasitc diode gets shorted.

If the polarity is reversed, the parasitic diode never conducts, thus never allowing the MOSFET to turn on. 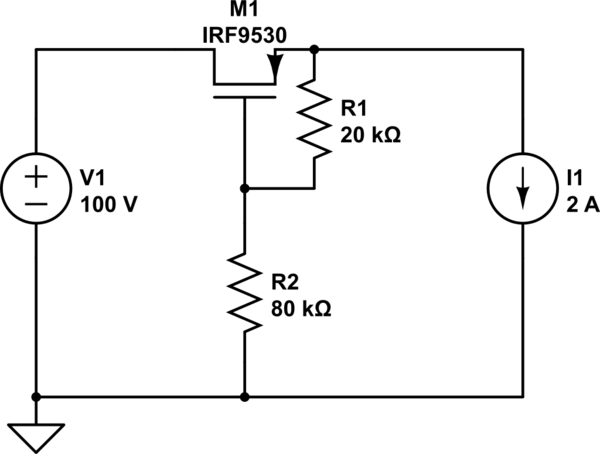