This question already has answers here:
How does a capacitor block DC?

Capacitors behaving as an open circuits, How can we understand the concept of the Electrons flowing through a capacitors. 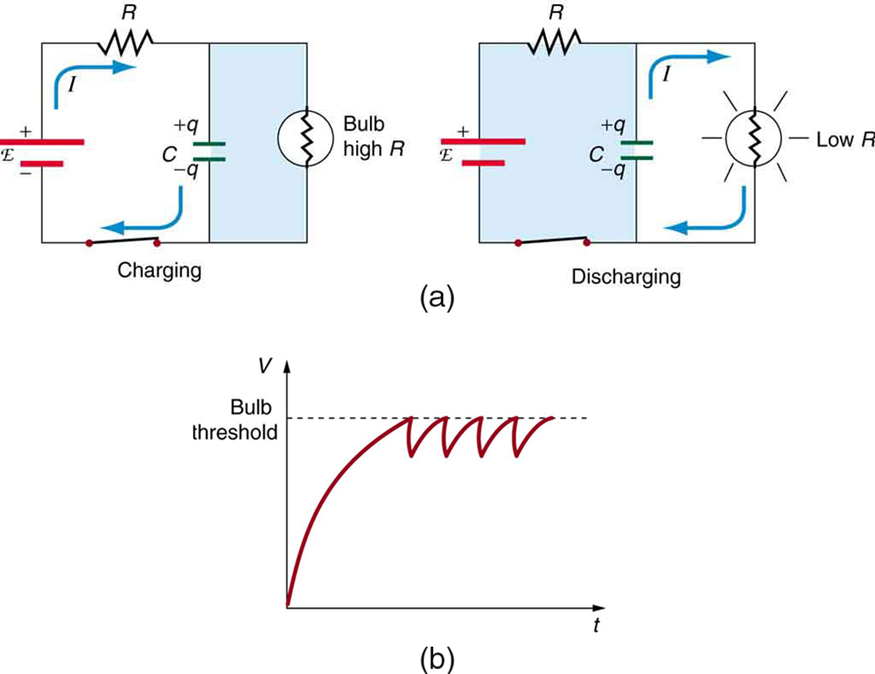 See EEVblog #486 – Does Current Flow Through A Capacitor?

Electrons do not leap from one capacitor plate to the other but whilst the capacitor is charging or discharging as many electrons leave one terminal as arrive at the other, they are not the same electrons but for all practical purposes you can say that changing currents flow through a capacitor.

Electronic – How does current flow through a voltage source

My favorite educator, Bill Beaty, often rants at the many misconceptions that all too many people have been infected with. One of the many common misconceptions involves batteries.

"Frequently-Asked Electricity Questions": "THE LIQUID BETWEEN A BATTERY'S PLATES IS A GOOD CONDUCTOR. SO WHY DOESN'T IT SHORT OUT THE BATTERY?"

"Why is electricity so hard to understand?" "...mistaken belief that no charge flows through batteries. ... This leads to the traditional incorrect flashlight-current explanation (current comes out of battery, flows...etc.) It also leads to the misconception that batteries SUPPLY CHARGE, and have a storage place for "used" charge. This might make sense if we believe that there's no path for charge through the battery. But it's wrong, because there is a path, a path provided by flowing charged atoms. Charge must flow around and around a circuit, passing THROUGH the battery over and over."

"But how SHOULD we teach kids about 'electricity'?" "A battery is a chemically-fueled charge pump. Like any other pump, a battery takes charges in through one connection and spits them out through the other. A battery is not a source of the "stuff" being pumped. When a battery runs down, it's because its chemical fuel is exhausted, not because any charges have been lost. ... When you "recharge" a battery, you are pumping charges through it backwards, which reverses the chemical reactions and converts the waste products back again into chemical fuel."

'Which way does the "electricity" really flow?' "When you connect a lightbulb to a battery, you form a complete circuit, and the path of the flowing charge is through the inside of the battery, as well as through the light bulb filament. Battery electrolyte is very conductive."

Electronic – How to a capacitor store charge whilst also passing current

It's easy. A capacitor doesn't store charge, it stores energy. The net charge in a complete capacitor (rather than considering a single plate or the insulator) never changes. An increase of negative charge on one plate is exactly balanced by a decrease in negative charge on the other plate. Therefore, as current enters one terminal an equal current must leave the other terminal.