I'm working on a project with a few stepper motors. I want to breadboard them so I know the circuit works well before creating a physical PCB.

Each of the three motors is rated 2A, but I'll be prototyping with 1A (controled with driver chip) at 12V. How dangerous is this much current on a solderless breadboard? It's a cheap one I picked up on eBay, so I doubt that it's made with super high quality materials. I won't be leaving it plugged in for extended periods of time and it'll always be supervised with me there if it receives power. Is this a bad idea?

Note: each of the motors will be on its own rail with its own wire coming from the power source.

Engineers with a conscience don't let others use breadboards.

Oh, I know, it starts out easy, like any other drug. You're uncertain of yourself and instead of doing calculations, or even back of the envelope calculations you say to yourself " I'll do the easy thing, I'll breadboard it- I don't have to think too much and then I can move on". But that is the easy lie, sort of like using SPICE (but I digress) when you should be calculating \$g_m\$.

So you try it, perhaps your friends are doing it too, you want to fit in. And hey! it works, and you didn't have to spend too much time at it. But in doing so, you don't get the practise of doing those calculations, that skill never develops and eventually you end up being dependant upon the little suckers.

and then they turn on you

You're projects have started to grow, and get larger and say you want to show someone "the cool thing" you have been doing. And they want to touch it and you jump at them, not willing to allow them to touch your baby, your precious.

I was lucky when I started out. Someone gave me a breadboard to work with, and I now suspect that they did it on purpose. The thing is, this breadboard was damaged, and I wasted hours trying to get something running when it was a faulty breadboard. I didn't have that internal modelling ability, I didn't know what to expect, so I wasted time. After than once I never once used a breadboard again.

Using a breadboard is an easy way out, it's an addictive drug and if you persist you'll one day find yourself wondering " hmm, can I run One Amp those those little traces?" maybe you can. But the real question is, should you? with that much power, what happens when the board shorts out in behind (like they are wont to do)?

Listen, there are lots of ways to prototype things that take only a little more time than a breadboard that are semi-permanent, are not fragile, are smaller and more importantly allow you to build high performance circuits (be that high amperage or high frequency). Use protoboards or dead bug the circuit.

Being a little slower actually is a good thing, because you end up with something that can be handled, doesn't stop working the moment that someone sneezes and most importantly ... because you are going to put more effort into it, you learn to actually calculate before you commit. You end up learning more.

So kick the habit dead bug that sucker. You'll find that you get a better circuit by far.

Electronic – How much voltage/current is “dangerous”

How much voltage is dangerous is not really a static number as it depends on your body resistance, time of exposure and source "stiffness" (i.e. how much current it can supply). You get figures like 60V (or as low as 30V) which are an attempt at an average figure above which "caution should be taken".
However, depending on how "conductive" you are at any one time, sometimes e.g. 50V might be quite safe and other times it may kill you.
DC or AC (and what frequency) seem to make a difference too, female or male, etc - this table is very instructive: 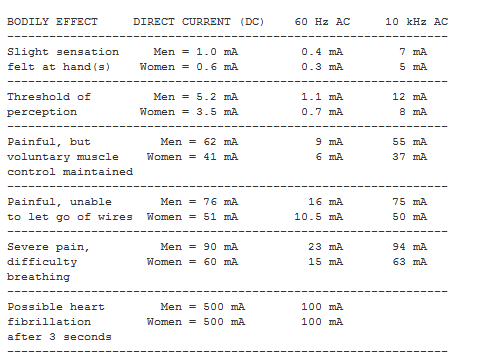 Figures as low as 20mA across the heart are given as possibly capable of inducing fibrillation - here is another table from the same source that gives body resistance based on different situations:

You can see that as low as 20V may be dangerous given the right conditions.

Here is the reference the tables came from, I think it is quite accurate based on some experiments I have done myself measuring body resistances. The rest of the site seems to be generally very well informed and presented from the bits I have read, so I think this may be quite a trustworthy source. 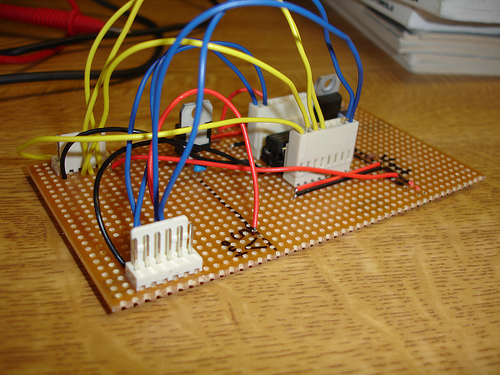 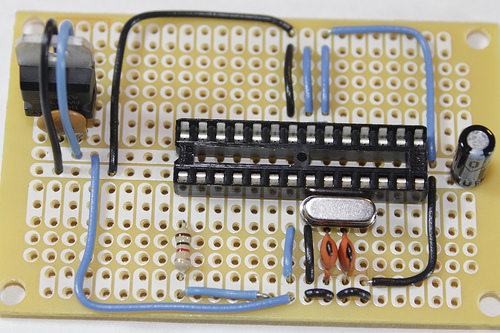 With these, you can either cut tracks or wire wrap.