I've been trying to build some circuits that use logic gates, without using pre-made chips. My main goal is to further my understanding of the subject, but it'd be nice to make something useful in the process.

After a lot of failed attempts and googling I landed on this question, which works great. But I feel that the current consumption will be very high (since the inverters will basically send a load of current to ground when they're low?). This is especially true if you want to use many gates.

It seems to me that you need to 'black box' the logic gates so that you can chain them as much as you like without much worry. The inverters do this, but at the cost of current. Is there a better way? Is learning the hard physics behind it all the only way to really make complex logic circuits, so I'm just moving out of my depth? I have a strong understanding of the gates themselves, and designed my circuits as pure gates already, but the actual physical implementation is very different.

So my question would be:
Is there a simple and effective way of blackboxing RTL logic gates so that they can be chained?

Edit: I just recalled that NOR can be used to construct other gates – so I suppose the solution would be a design for a NOR gate that can be treated as modular.

RTL isn't too difficult, but that doesn't mean it's trivial either. If you want, take a look at two of my answers: (1) building a full adder; and, (2) nand with led. But in those cases I decided to keep things really simple and not to actually do a serious design. You've mentioned RTL. So let's attempt an RTL design here.

Let's start out looking at the following example taken from one of my earlier posts:

Before we go there, though, the above circuit presents a design problem. If we assume that both inputs (A and B) are at the highest allowable input voltage that is still considered a logical "0", then it's pretty clear that there will also be some small base current present and that this current will be amplified by the \$\beta\$ of \$Q_1\$ to become a possible collector current pulling down the collector voltage. This makes the circuit far less designable, especially because the value of \$\beta\$ varies over parts even within the same family. We need something present to make the circuit less dependent on the value of \$\beta\$. (We'll also need something to also make the circuit less dependent on the variations of saturation current [which affects \$V_{BE}\$], too. But that will shake out in the process.)

A way of achieving this is to add a resistor from base to ground (or some even lower voltage.) Something like this: 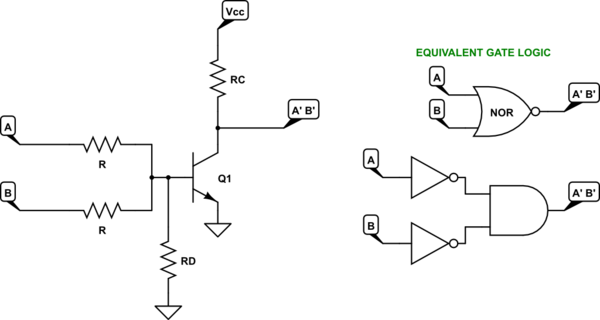 (I've shown this circuit with \$R_{D}\$ going to ground. A design could also consider the idea of tying it down to a negative rail. But there's no need, for now.)

The above circuit, with the added \$R_{D}\$ base resistor, greatly improves things as it allows us to divert small base currents away from the BJT. It provides an additional degree of design freedom that we'll find useful to have.

For a design, we need to figure out the worst case situations and design for those cases. (If we do that, the rest will only be better.) The two worst possible cases are:

To address these details, I'm going to haul in a few things I know about small signal BJTs. Roughly speaking, their collector currents will increase by a factor of 10 for each \$60\:\textrm{mV}\$ change in \$V_{BE}\$. (Taking into account some reasonable thermal variations, each factor of 10 might be for anywhere from \$50-70\:\textrm{mV}\$ change in \$V_{BE}\$.)

I've stayed completely away from deciding resistor values up to this point. But now I'm going to pick a value for \$R\$ and base everything else upon that choice. I'm going to set \$R=39\:\textrm{k}\Omega\$. You can choose something else, if you want. I'm just picking it to keep the power supply current semi-low.

This solves out for case (1) above as:

The only thing left to do is to worry about \$R_C\$. Here, it needs to be strong enough (lower valued is stronger) that it can pull up six loads when \$Q_1\$ is OFF and weak enough that when \$Q_1\$ is ON that it drops enough voltage to allow the collector to fall below \$V_{LO_{MAX}}\$.

Here is the resulting circuit design: 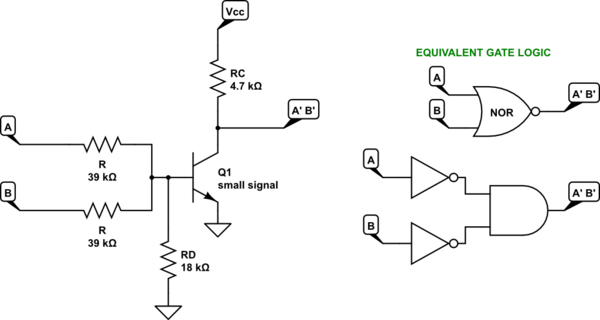 I think you will find that this works well with up to six loads on the output and works over the ranges I've discussed. 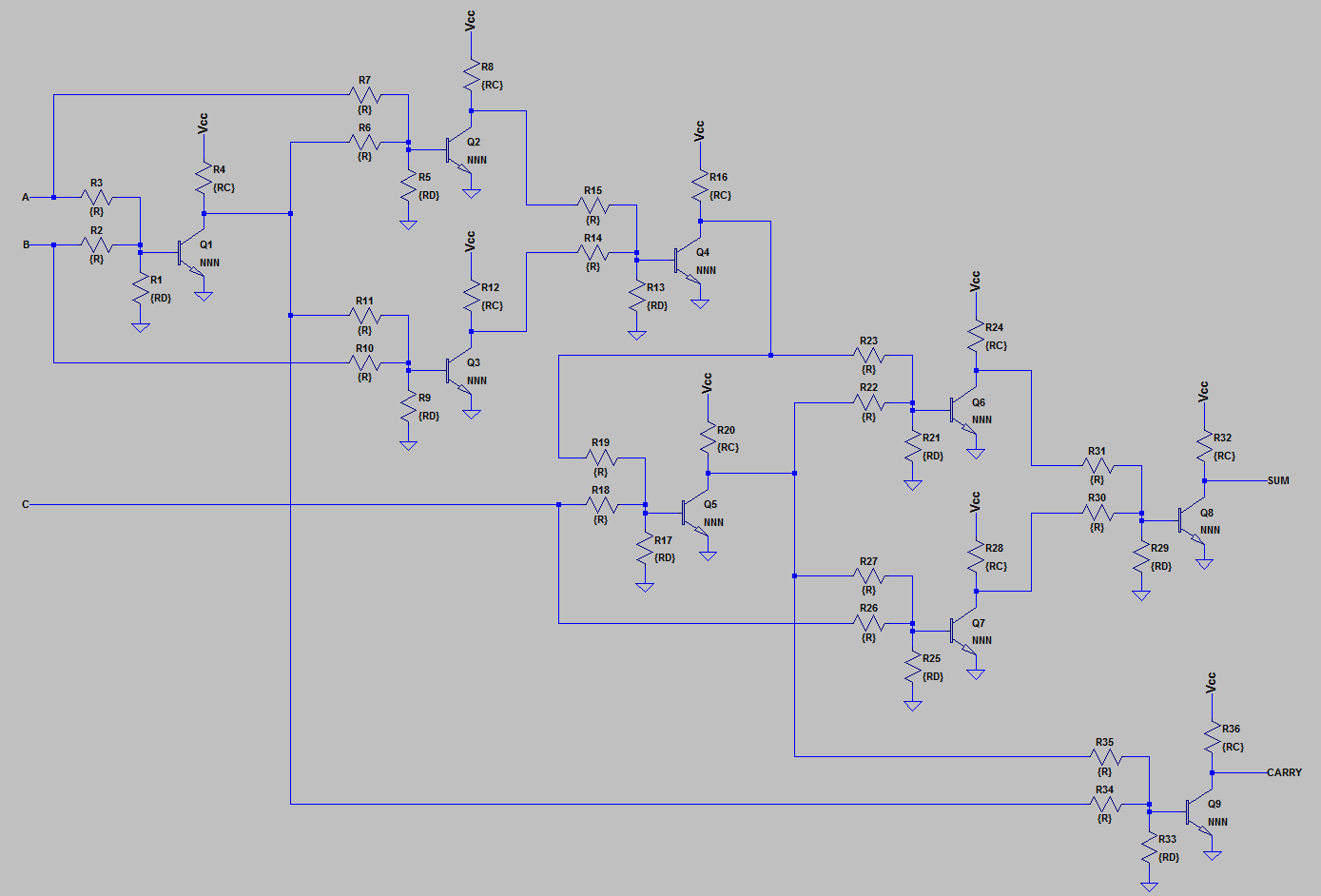 Electronic – Logic to decrement by one

Have you considered adders? You can subtract with an adder.

You just need to add -1 to the input value. A pair of 7483 4-bit full adders should handle your 8-bit input. Apply the input X to the 'A' inputs, and apply the binary representation of -1 to the 'B' inputs. Fortunately, the 2's complement representation of -1 is all ones; this means that if you just tie the 'B' inputs all high, you're done. What comes out should be X-1.

You can build the mux with 4 NOR gates, too. It doesn't require extra inverters on the inputs and outputs, if that's what you were doing. Note that the sense of the "select" input is inverted, so you need to swap the "A" and "B" inputs to compensate.