This is the datasheet of the driver IC I am working on (LM5112).

Following is the application diagram of the module.

Basically this is the GATE driver circuit for the MOSFET with PDM signal as the input.
I am looking for how to calculate value of the MOSFET input resistor (R3) ?

1) How to calculate the MOSFET input resistor?

2) What are the factors affecting the MOSFET input resistor calculation?

Please let me know if any further info is required.

If you selected this driver, which has huge output current (7A) then I presume you need this gate drive current to switch a very large FET very fast.

The gate resistor can still have uses though:

I would advise to put a resistor footprint just in case, and start with a 0R jumper.

The rated values (voltage, temp etc) are the values at which the life of component has been tested. If you want to increase the life of electronic component then you should use it below its rated values. For eg in your case, your required VDS=5V. So, check the rated VDS in datasheet which is 60V. According to datasheet for safe use of MOSFET you should apply VDS = 80 % of rated value of VDS = 0.8 X 60 = 48 V. So any system where required VDS = 48 V, this MOSFET can be reliably used. that's how you check if any component fulfills your requirement or not.

The pre-irradiation electrical characteristic and the curve is related to space radiation test. I think following link could be useful to you http://www.microsemi.com/document-portal/doc_view/123629-high-reliability-radiation-hardened-semiconductors

Let me start by saying, that yes, your question is broad and/or complex, but you're sticking to the rules of doing some research first and asking a (set of) specific question(s). This as a disclaimer to those who might see your question as a reason to ask "So, what MOSFET should I use?".

I will answer your questions in a somewhat different order than you ask them, as this helps me try to build up to what a MOSFET really is.

The gate in a MOSFET is different from a standard bipolar (junction) transistor. In a "normal" BJT there is a diode-like connection between the base and the emitter, which needs some current to make more current flow, it works as a current amplifier, of sorts.

In a MOSFET the gate is "floating". The name stands for: "Metal-Oxide Silicon Field Effect Transistor". The Metal Oxide is what insulates the gate from the Silicon channel. The field effect is what causes a voltage to open a current-capable channel in the transistor.

Of course, if you choose a 10M resistor, your capacitor in the gate will need time to charge, and that will stretch out the switch time of the MOSFET, which will cause unnecessary heat.

For most low-frequency applications, you can just use 2k and rely on that being quick enough. Your controller can probably easily support 500 Ohm as well, if you want to, and even a direct connection might work well long term, with no resistance, but good design would be putting at least a few hundred Ohm in there.

Continuing on the talk of channels and field effects, the MOSFET really acts like a resistor to the flow of current.

There is a channel inside the MOSFET (hence N-Channel or P-Channel). A more common Enhancement MOSFET (like yours) has a normally closed channel, because the internal make-up of the semiconductor "pushes it closed", disallowing current to flow (significantly). By applying a voltage to the gate, the extra charge on the gate electrode forces the channel slowly open.

Through the control of that voltage the MOSFET will be either a little bit open, in a region where that voltage nearly linearly controls the flow of current at a fixed voltage across it. Or it will be completely turned on, where the resistance is incredibly low and with a small voltage across it lots of current will flow. (I am ignoring a few even more complex situations in this, but don't worry about it yet).

For switching you want to be in the second part, as on as it can be. In that area there is an Rds-on value, which dictates the apparent resistance of the channel at a certain gate voltage. 40mOhm is pretty low. You can easily get much lower these days, but value for money, the region of 20 to 100 mOhm seems to be where you find most N-types.

It basically just means, when it's on, with this gate voltage, normally you need to think of there being a 40mOhm resistor in series with what you're switching, like this: 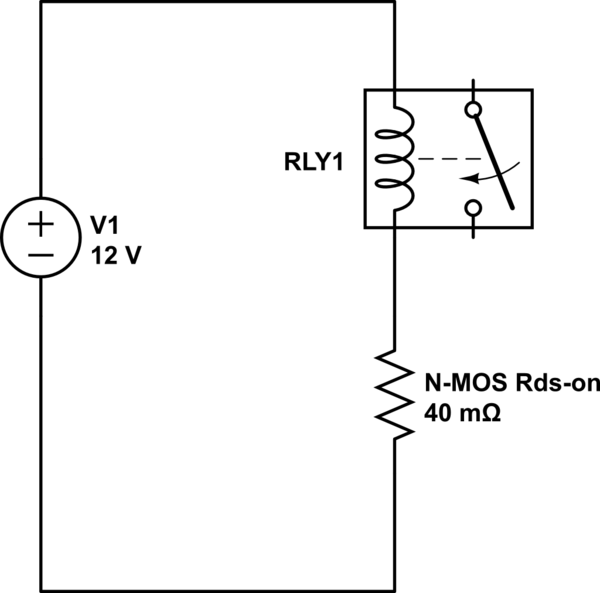 In the case of 0.5A that means the MOSFET has 20mV across it and dissipates a tiny 10mW once it's on. That's perfectly fine and you won't notice such a small voltage drop either.

Be careful, that this MOSFET's figure you point to doesn't include 3V, and that it starts at 2A, so real assumptions are hard to make about 3V and 0.5A based on that graph, but the graph does suggest that it's likely that for 3V on the gate you might be looking at 40 to 60 mOhm at low currents.

That figure does imply that even at the worst possible temperature that MOSFET can still easily turn on your 0.5A load. It's not the best graph to get that from, but, yes, at a conservative 2.5V Vgs at unuasably cold temperatures it still should conduct 1A. But at what voltage drop? 25V... might be a bit high for you to invest in just your switch.

Which brings me last, to your first question:

What you want, ideally, is infinite current at 0 Vds. Of course, ideally doesn't exist in the real world, so as low as possible with a high enough current is what we make of it.

Be aware though, that they add the caveat of a 250μs pulse to that graph, so it may mean it will not be able to keep performing like that for longer pulses if you go right to the edge. The edge being, for example, 8A drain current at 3V gate and expecting 1V or less across Drain and Source.

All in all, this MOSFET is easily capable of driving your load, and probably still suited well enough (given a little bit of heat-sinking) to still drive ten of them and as long as you don't switch them very fast and often, can be driven by your 4mA capable 3.3V controller with a small resistor on the gate.

EDIT: Though, comments to your question are right in suggesting there are better ones for the task of using 3.3V to drive it. Regardless, this MOSFET will work for your situation.