I am using a dual op-amp package in a circuit, however I only need to use one. Is there anyway to disable the other op-amp so it doesn't inject electrical noise in my circuitboard? I think grounding the positive input and setting the op-amp into unity gain might be best, but I am not certain.

A unity gain buffer is what this article also suggests. Quote:

The best thing to do with a surplus op-amp it is to use it. There are lots of places in an analog circuit where a buffer amplifier may improve performance - and a unity gain buffer uses no extra components.

Grounding the non-inverting input is fine if you have a dual power supply. If you use a single supply you better set the input to Vcc/2 with a resistor divider:

(from the same article)

Electronic – How to calculate the noise of an op-amp circuit

The question which noise sources need to be taken into consideration depends on how severe they are. Your question indicates that you are interested in noise generated at the op amp and not noise generated by interference from neighboring circuits (internal/external noise).

In order to make things comparable, all noise is referred to the op amp's input (RTI). In theory, I guess any point in your circuit might work as long as you refer all noise sources to that point, but it is common practice to act as if all noise sources were directly at the input pins. Sources include noise in the resistors, noise generated by current flowing into the op amp's input pins and noise that may be considered as a voltage between the inputs pins.

There is a very good discussion at this Q&A-style source and also in this nice article from 1969 (!), both authored by Analog Devices' staff.

Without re-typing everything in these sources, here are some rules of thumb:

Noise in the resistors becomes bad when the resistor values are high (some 100k or some 1M) and when the circuits are designed for high bandwidth since the noise is proportional to \$ \sqrt{4k \cdot T \cdot B \cdot R}.\$

You can try to minimize R, you can try to limit the bandwidth B if possible, you can put the circuit in liquid nitrogen (low temperature T), but you can't go for a low Boltzmann constant, because Boltzmann is dead (quote stolen at Analog Devices).

Current noise, i.e. noise generated by current flowing into the op amp inputs, will be converted to a noise voltage by the resistors around the input (\$R_f\$, \$R_g\$) and amplified by the circuit's gain. This is one of the reasons why one prefers op amps with very low input currents especially for high-ohmic circuits.

Voltage noise results from a real op amp's inability to completely null the voltage between the input pins.

All noise sources can be combined as the square root of the sum of their squares since they are independent of each other, which will work only if all sources are RTI.

A normal opamp has an infinite gain, practically [factor] x 10^5. The difference between + and - terminal determines its output:

For an opamp you will have 2 rules:

When you make a real circuit, you reduce the open loop gain to a closed loop gain. However, the 2 rules stated only work for negative feedback. If you use positive feedback, they do not apply.

So, if the rule of no input voltage difference doesn't apply, the opamp basically becomes an comperator. An inverting situation would try to get the difference to 0V because of its feedback. Now it will be become a simple comperator with Vout=H if V+ > V-, Vout=L if V+ < V-. In an wrong unity gain buffer, you'll see Vout=L because V+ is lower then the signal you're feeding it with.

Because I couldn't believe both situations would simulate the same, I did it myself: 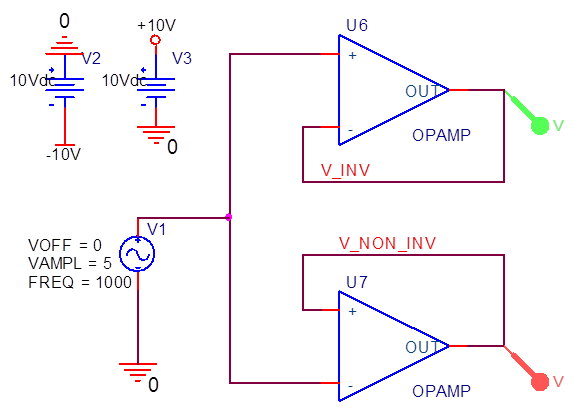 Just 2 opamps which are internally fed to +/-15V. They follow a 1kHz 10Vpp source. The results are: 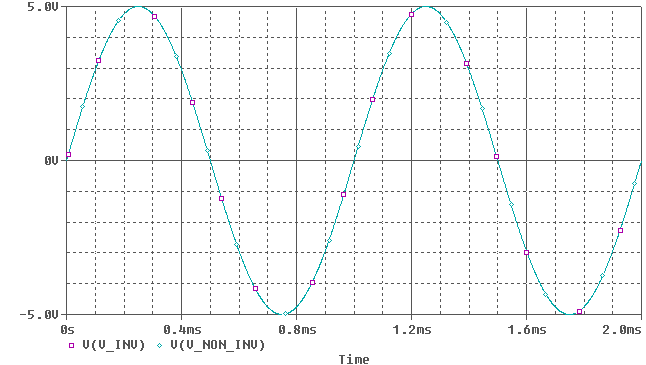 Oh so they do amplify correctly. But the ideal opamp has an infinite gain, no offset voltages, no input bias currents, no bandwith limitations (however, we wont notice much of that at 1kHz) etc. If we look at a real opamp, I picked one randomly (TL031): 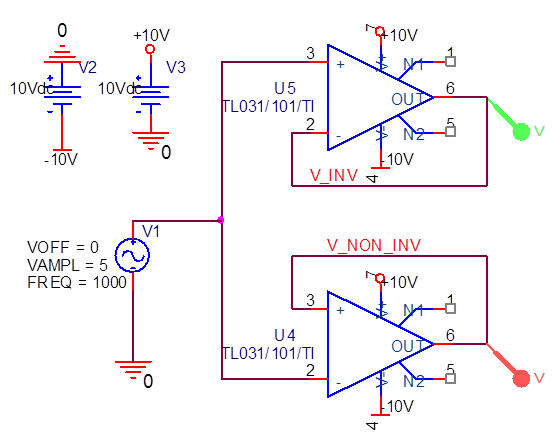 An now it suddenly clips, because the opamp doesn't have the correct feedback. 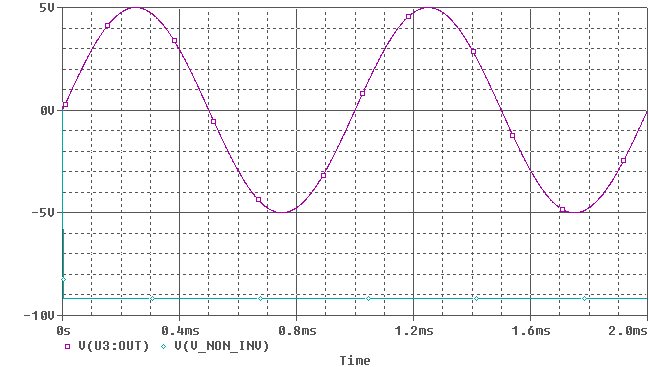