I want to run a 4 phase switched reluctance motor at low speed. The expected conduction sequence for the motor winding(y, r, b, g) follows the output similar to that of a 4-bit ring counter and thus I want to use a ring counter to give gate pulses to the power circuit of the motor.

The problem is with the clock. I want to be able to generate the clock from the outputs of two optical sensors in motors rotors. The following picture explains what exactly I want to achieve. 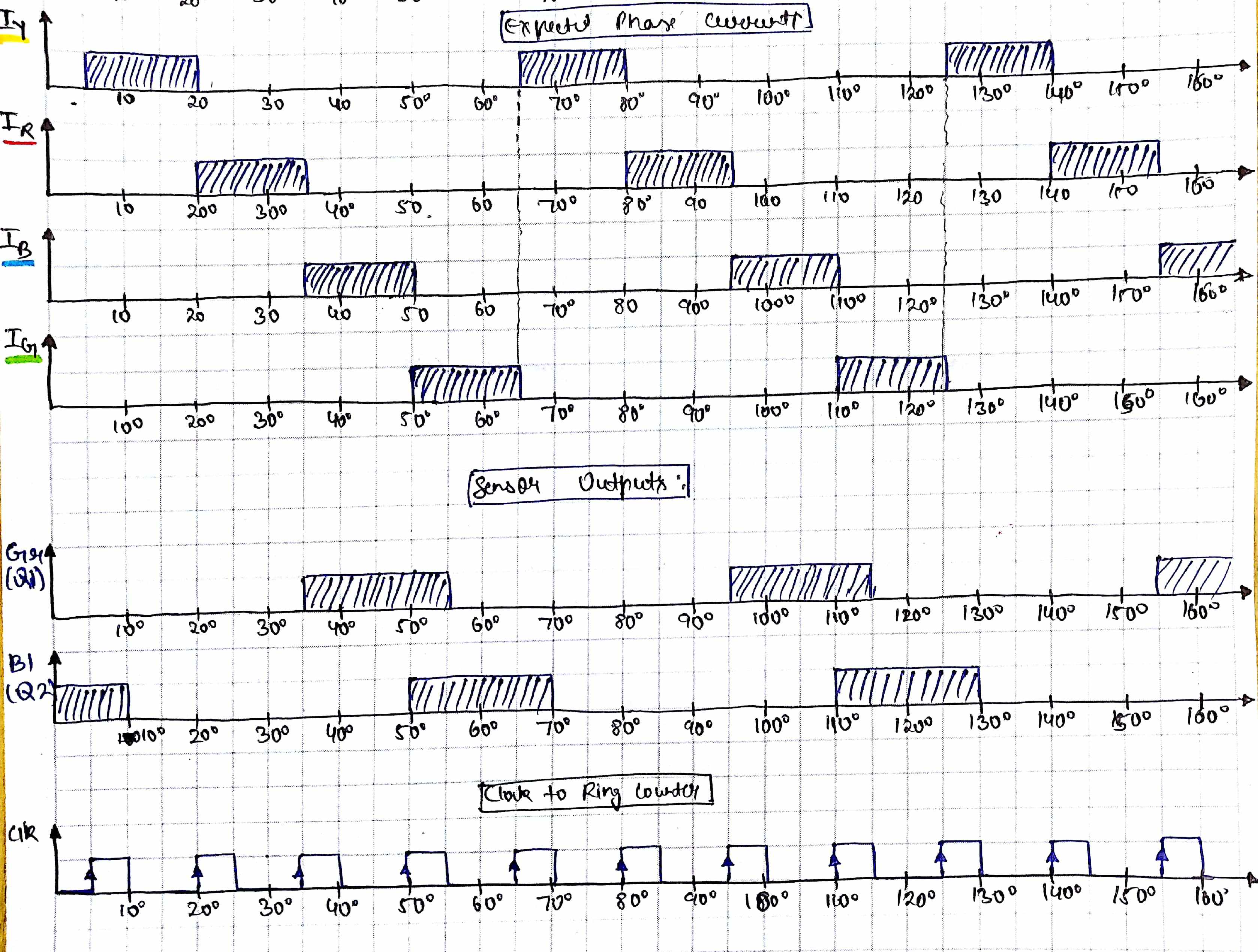 How to generate the "clock" for the 4 bit Ring counter from the sensor outputs(Q1 & Q2) as shown in the figure above?

The clock will be positive edge triggered to the counter. Also, as the sensor output(effect) is generated as the motor rotates(cause) , initially I plan onto give a manual start to the motor via some extra circuitry and then as the motor attains some low speed, the external circuitry can be automatically disconnected and the counter circuit (using sensor outputs) will be used to run the motor.

Also, suggestions on some other different methods to run the motor are also welcome.

You appear to be somewhat confused about cause and effect. The ring counter needs to be going to get the motor to turn. That would be the cause. The sensors that detect some aspect of the motor rotating are the effect. Trying to devise some means to generate the cause from the effect will normally not work as there would be nothing to get things started from time zero.

Generally it would be way better to generate the CLK signal independently from some circuit that produces the rate that you want the ring counter to operate. The sensor outputs would then just follow the driven behavior of the motor in a cause and effect relationship.

If you applied some intelligence to the interpretation of the sensor outputs, such as by using a microcontroller, you could possibly have that modulate the behavior of the standalone clock generator to increase or decrease the clock frequency to accommodate load changes on the motor that cause its operating speed to change.

Electronic – How to cycle through outputs ONLY given clock signal

You can use a counter and then a decoder. The input to the counter will be your clock and reset (which can be omitted if you don't care what the state of the system is initially). The output of the counter will go into the decoder, which converts the binary number into a 'one hot' representation, where only one of the decoded outputs will be '1' at once. For example, a 74161 4-bit counter and 74154 4-bit decoder should work and give you 16 outputs.

Other answers have focused on why you might be approaching this the wrong way. Although I agree with those answers, what you're asking for does exist, so I'll go ahead and give you a straight answer. You'll likely find that this approach is more expensive than alternatives though.

What you want is a 2 GHz voltage-controlled oscillator (VCO) with 3.3-V LVPECL outputs. There are many vendors out there who make such parts.

If you don't find one with LVPECL output, since this is a clock signal, it's relatively easy to adjust the levels to something compatible with LVPECL by ac coupling and rebiasing. Any rf level between -3 and +2 dBm should be usable with a LVPECL input.

LVPECL parts like your 100EP016A can also accept single-ended inputs if you bias the complementary input to the midpoint between the normal logic levels (often there's even a pin called VBB that outputs this level for your convenience, but I didn't check if the 'EP016A has it).

You will then need to build a phase-locked loop to maintain the VCO output frequency accurately by comparing it with a low-drift reference oscillator, which could be anywhere from 10 to 100 MHz.

I noticed that the maximum guaranteed switching frequency of the MC100EP016A is only 1.2 GHz, so if you really want to do this at 2 GHz, you might want to look for another part. Maybe MC100E137, but then you'll need to have a 5 V supply and you'll also need to deal with the unequal timing of the different outputs for a ripple counter.

Finally, you'll need to deal with latching in all the bits of the count at exactly the same instant, so you don't capture some bits before a transition and some bits after. One solution to this is to use a gray-coded counter instead of a binary counter --- then only one bit changes for any transition, and the maximum error from latching delay variation is only a single count.