I have some small devices that draw 20mA. I'd like to add a resettable (PPTC) fuse to them but I am not sure what value to select.

My thought is I need to find a value that will tolerate the startup or inrush current when the circuit first turned on, but I don't know how to measure that. (My meter isn't that fast, but I do have an analog 100MHz oscilloscope.)

The devices have a capacitance of about 122μF.

LittleFuse provides a very nice app note with a lot of details for the design of these kind of devices.

As for measuring the current, you could use a very small resistor (1 or 0.1 ohm resistor) and use an oscilloscope to measure the current. Be careful not to ground the device. You need to use two probes for doing this measurement and subtract the value of one from the other - DO NOT CONNECT THE GND OF THE PROBE TO EITHER SIDE OF THE RESISTOR- you will in effect cause a short circuit if you do this. Just get 2 probes, connect the tip to each side of the resistor, and the grounds to the actual ground. use oscilloscope math capability (or just yourself) to do a difference between the two channels and this will be your current.

So for polarity reversal causing no damage and requiring no fuse replacement you can use pretty much whatever diode you want and put it in series so that "normal" current flow passes through the diode only if properly plugged in. With the current requirements and voltages that you're working at, this shouldn't be an issue. A simple silicon diode should be fine.

For overvoltage you're going to want a circuit more like what Nick Alexeev suggested in the comment. Essentially a zener diode with a PTC or other type of fuse. The Zener should have a value which is less than the maximum input to your regulator.

So basically, if you reverse batt_in+ and batt_in- the first series diode will prevent any current from flowing and protect your circuit. If batt_in is greater than the breakdown voltage of the zener, it will start pulling down a lot of current, and blow the PTC fuse.

The only extra thing you might do, is to guarantee that the startup current doesn't exceed your PTC's current limit, you can place a resistor on "protected V_IN+" or "protected V_IN-" (in series before the regulator and decoupling capacitor) such that:

For the desirability of any specific characteristics for the PTC, the diodes, and everything else, it all depends on your application. In general, I tend to wing it unless I have a real reason to crunch the numbers. I'm also a bit too tired (on my way to bed) to really get into how to calculate what these values should be, but if you need this info ask in a comment and I'll post some tips on getting the numbers.

Though, why not just use a polarized connector for the batteries so that you don't have to worry about whether the connector is plugged in backwards? And in what context are you going to overvolt? Think about these questions too when trying to answer a more complicated design choice (a polarized connector is easier than adding an extra diode, and is less likely to lead to extra design considerations).

Is there any lifetime to these things? Number of resets? I looked here but could find no such spec.

See the diagram below, taken from the useful PolySwitch PPTC Device Principals of Operation (sic) seems likely to be similar to the Littlefuse document which you are not permitted to share - maybe this is why :-).

As Tyco / Raychem publish this curve publicly they may be a better source of information on lifetime and cycling, even though not the brand you were working with. 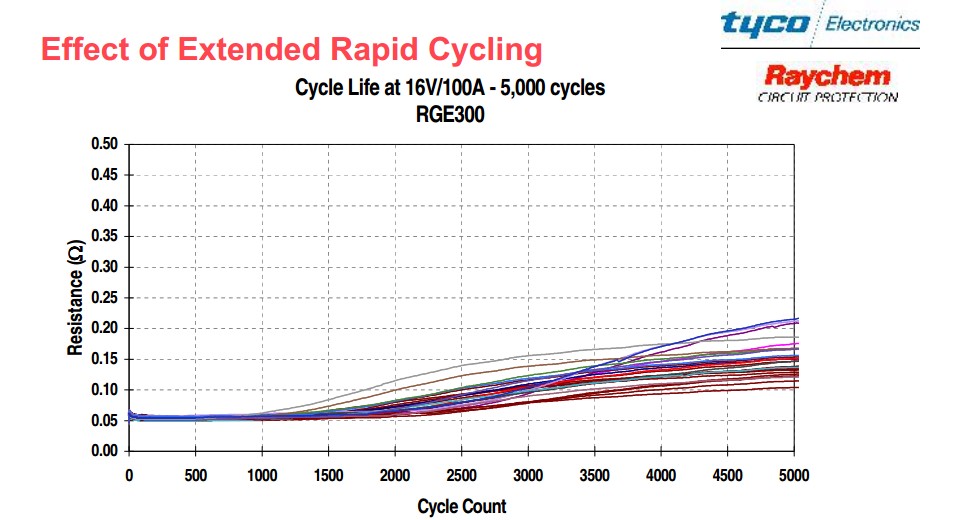 The term "extended" here suggests to me that they consider 1000+ cycles a non-standard application. I do not know what "rapid" means in this context.

As trip point is closely related to device temperature (and can be affected by eg thermal effects of adjacent contacting metalwork, PCB track thermal characteristics and air flow) then it is essentially certain that trip current will decrease as on resistance rises. As noted by others, as power dissipation is related to I^2.R and as I is established by external circuit elements, it looks likely that trip current would start to fall from about 750 cycles onwards for the example in the graph.

The Polyswitch or Polyfuse was invented by Raychem Corporation (now TE Connectivity).
How well their data applies to competitors products is uncertain but components using the same basic principal seem liable to share somewhat similar characteristics, including cycle lifetime.

This does not directly answer the lifetime question but may help with the cumulative effects (or lack thereof) of multiple trips.

Heating of the PF to a trip temperature (typically 125 C)

Cooling and contraction is a thermo-mechanical process. Initial return to a low resistance state occurs within seconds to tens of seconds due to temperature drop but a complete return to initial resistance due to recrystallisation may take days weeks or months.

There is some maximum resistance value "Rimax" that a device will assume post reset under standard test conditions* that can be used as a maximum design parameter.
(* Measure after the device has been depowered for one hour post-trip.)

Resistance post-trip will be "reset" to some value > Rinitial and <= Rimax after each trip, but apart from this, increases are non-cumulative with multiple trips. In view of the Raychem curve at the top of this post, that conclusion seems liable to be true for only a 'sensibly small' number of cycles
[for selected and limited values of "sensibly" :-) ].

While the document is Tyco focused it contains much general material.

Material on page 4 starting "Reflow and trip jump (Rimax) " is of likely relevance.

However, since this time can be days, months, or years, it is not practical to expect that the device resistance will reach the original value for operational purposes. Therefore, when PolySwitch devices are being developed, this "trip jump" or "reflow jump" is taken into consideration when determining the hold current. This increase in resistance is defined as R1MAX and is measured one hour after the thermal event.
It should be noted that these trip jumps are non-cumulative over sequential trip events.

BUT, as above, "In view of the Raychem curve at the top of this post, that conclusion seems liable to be true for only a 'sensibly small' number of cycles
[again, for selected and limited values of "sensibly" :-) ]."