Can someone explain to me a good way to mount a 5mm component LED? A little background on the project to help.

I'm working on a prop that will be carved out of styrofoam. I will be using LED's to illuminate recesses of the prop. The LED themselves will be mounted under a foam shelf or in a cavity so they are not visible to a casual view. There will of course be wires running though the interior of the prop to the LED's.

My question though is how to securely mount the LED's to the foam. I don't want them to wobble (the prop is handheld). A LED doesn't really have much surface area and I doubt applying glue directly to the LED is a good idea especially if I ever want to change it. Is there some sort of LED socket I can buy that the LED snaps into? If not how would you go about mounting an LED in a piece of foam?

Can you glue a flat panel to the foam (perhaps a small piece of scrap PC board), then drill a hole for the LED and mount it in an LED holder? That would allow plenty of surface area between panel and foam and the holder http://well-ton.com/image/bph2.JPG 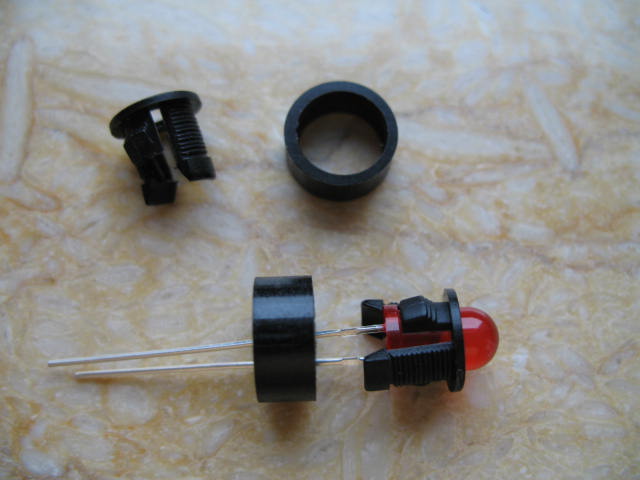 will be a snap fit to the hole. Secure mounting and allows you to replace the LED if need be

There are various misconceptions here.

I don't know what kind of LEDs these are, but most likely you can afford at least a volt accross the emitter resistor, so 3.3 Ohms would be a better choice that will give you more control.

As for the not quite 0 and 5 volt output, that's probably something the Arduino is doing. Keep in mind that arduinos are Simplified for the masses. It wouldn't surprise me if there is a resistor in series with each output as protection.

The opamps are probably working fine enough. Every opamp has some offset error, and if these are a little positive, their outputs will go high just enough to turn the transistors on a little to make that offset voltage appear accross the emitter resistor. This is yet another reason for using a larger emitter resistor.

Electronic – How to pick a surface mount LED

Trying it and seeing is liable to be useful.

Where A is the full cone angle of the source.

A modern LCD screen is typically 300 lm/m^2 at the surface.

Have a look towards bottom of Wikipedia candela page - and ask questions.