I have built a PCB with a set of high-side BJT drives shown in the schematic below. I'm using 8 of these to drive the columns of an 8×8 RBG LED matrix. 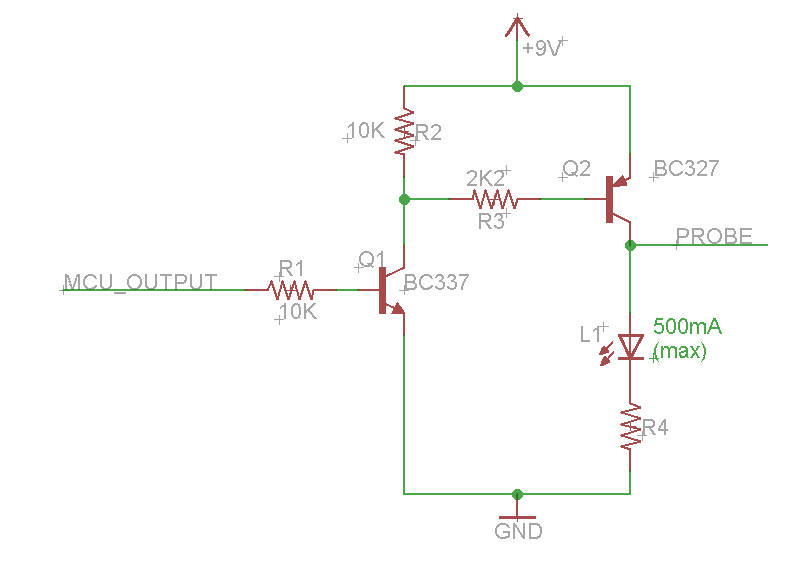 While debugging the board with my oscilloscope (with the load, i.e. L1 and R4, disconnected), I noticed that the circuit was showing a much longer fall time than I expected. I got 660us while I expected a fall time below 1us. Below are a series of scope shots I took. 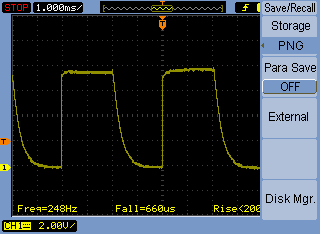 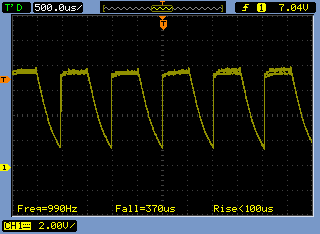 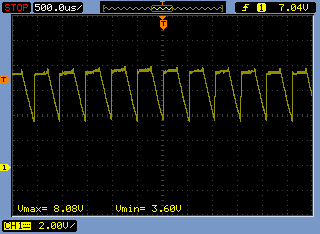 I'm switching the drive using an MCU through the MCU_OUTPUT signal and the scope shots were measured at the PROBE label.

The problem is that I need to switch the drive at around 14kHz, but above 1kHz, it doesn't even get to 0V during fall anymore. So above a certain frequency, the drive doesn't turn off.

Well, I only (sort of) understand how BJTs work in simple switch and amplifier configurations, so I'm puzzled with these results. I tried googling for it, but I don't even know what search terms to use. I'm stuck.

I'm hoping I can learn something new about transistors with this opportunity.

Update: Testing with the load connected

I took Michael's answer into consideration and took another set of measurements with the load now connected. The scope shots are below. The results were much lower fall times, in the order of 660ns. That's 1000x lower than the original 660us I was getting with the load disconnected. 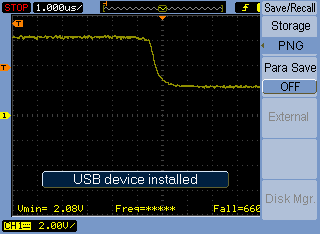 Switching at 14kHz with load connected: 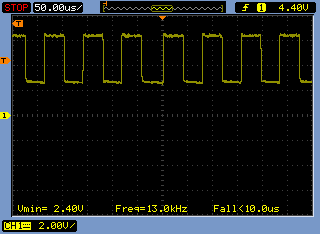 The end result is that the circuit I built is capable of switching my loads at the required frequency. It's just that I was making an incorrect measurement with the load disconnected.

Trying to evaluate your fall time with the load disconnected is not a useful measurement. As the PNP transistor turns OFF its collector terminal goes to a high impedance. That leaves the load to be the scope probe impedance which is likely to be 1Meg or 10Meg ohms. It is no wonder that it takes a long time for that size of load to discharge the small capacitance of the collector circuit and the scope probe capacitance.

Instead you should be looking at your switching time with the actual load hooked up. If the actual load is not available then at least add a test load resistor from the PNP collector to the GND rail. Size the resistor to dissipate power equivalent to the normal load that the circuit is meant to drive. Doing this you will see the real fall time and rise time of the circuit.

To get my point across take a look at the LT Spice circuit simulation below. I've drawn the circuit with a load consisting of a 10Meg ohm scope probe in parallel with 22pF of capacitance to simulate your actual scope probe capacitance plus some for the PNP collector terminal and the wiring. These pictures clearly show that the long fall time you are seeing is due to the fact that you have the load disconnected as I said above. It has next to nothing to do about the LED characteristics or the PNP saturation as another answer suggests. 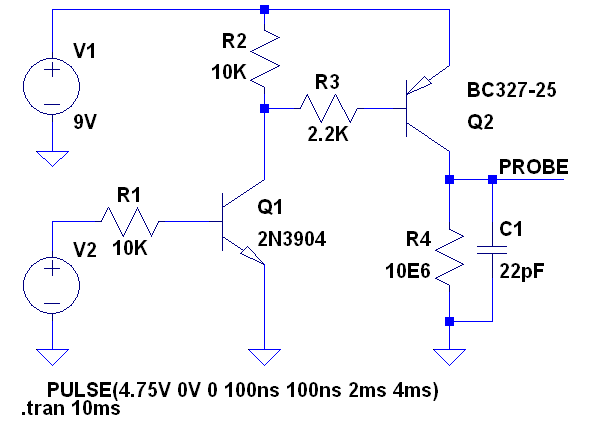 Anti-saturation diodes are connected in parallel to the C-B-diode of the transistor that is to be kept from saturation. You are doing this correctly at the npn (anode at base and cathode at collector), and it should be done exactly the same way at the pnp, just that the diode is the other way round in this transistor: cathode at base, anode at collector.

I am not really sure how you chose your base resistors. I assume you have a supply voltage of 5 V and a rectangular base drive signal (0 V, 5 V). I would suggest you use identical values for both base resistors. With 5 k\$\Omega\$, it is likely that the high value of the base resistor does more harm than an anti-sat-diode would do good. Something in the range of 200...500 \$\Omega\$ for each resistor seems better to me.

If you want to push the speed even further, you can try paralleling the base resistors with small (approx. 22 pF) capacitors. The trick about finding the right value for the capacitor would be to make it somewhat equal to the effective capacitance at the base, thus forming a 1:1 voltage divider for the high frequency part of the rising or falling voltage edge.

Here is the schematic I used to check with LT Spice. The input signal (rectangular, 0 V and 5 V) is fed into three similar BJT inverters, each using a complementary BC847 and BC857 pair. The one on the left has no special tricks to speed it up, the one in the middle uses Schottky diodes for anti-saturation and the one on the right also features a high-speed bypass along each base resistor (22 pF). The output of each stage has an identical load of 20 pF, which is a typical value for some trace capacitance and a subsequent input. 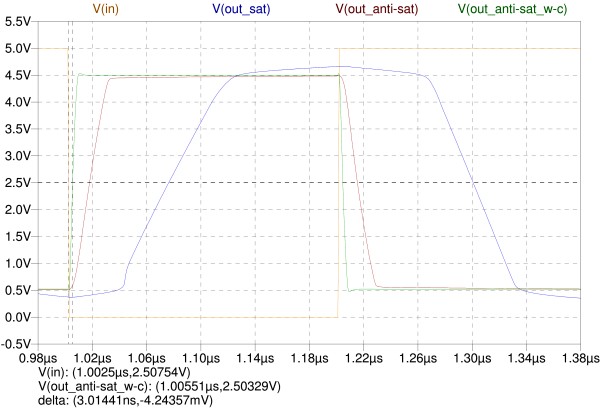 You can clearly see how the propagation delay gets less and less. The cursors are set at 50 % of the input signal and at 50 % of the fastest circuit's output and indicate a very small difference of 3 ns only. If I find the time, I might also hack the circuit and add real scope pictures. Careful layout will definitely be necessary to achieve sub-10 ns delay times in reality.

The breadboard works nicely and shows a delay of < 10 ns on my 150 MHz scope. Pictures will follow later this week. Had to use my good probes, because the cheapo ones showed not much more than ringing... 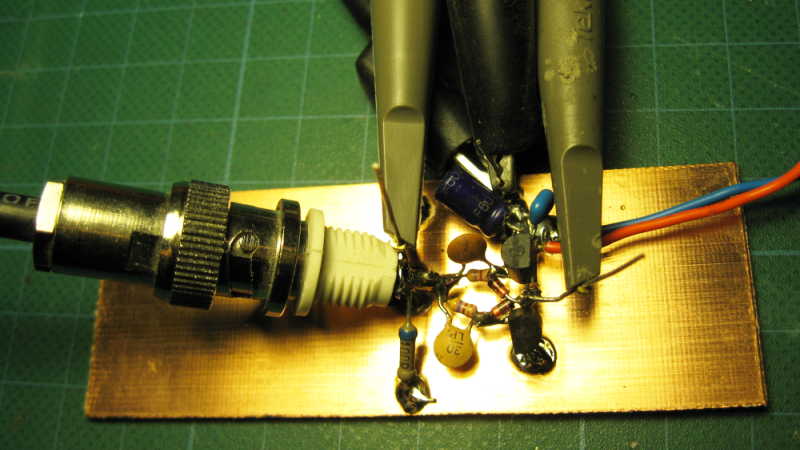 The first screenshot shows the input and output waveforms at 100 ns/div and with 2 V/div for both traces. (Scope is a Tektronix 454A.) 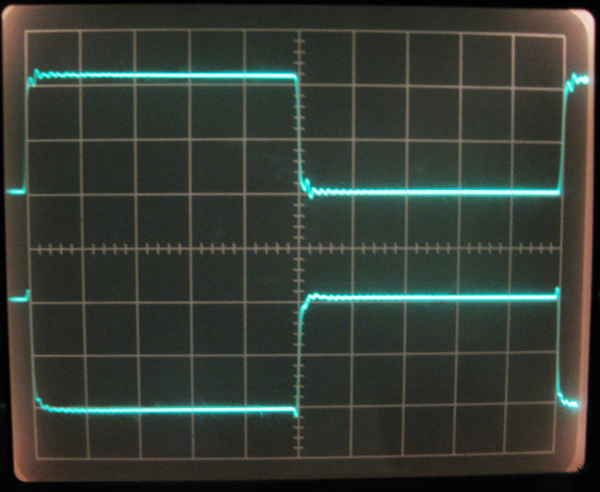 The second and third screenshot show the transitions from low to high and from high to low at the input with 2 ns/div (20 ns time base with additional 10 x horizontal magnification). The traces are now centered vertically on the screen for an easier display of the propagation delay with 1 V/div. The symmetry is very good and shows a difference of < 4 ns between input and output. 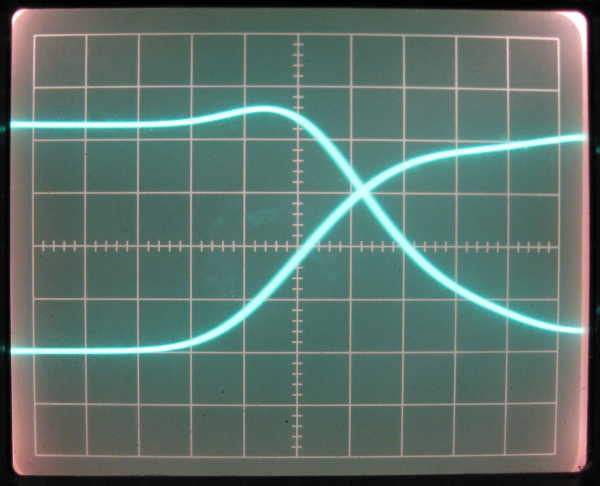 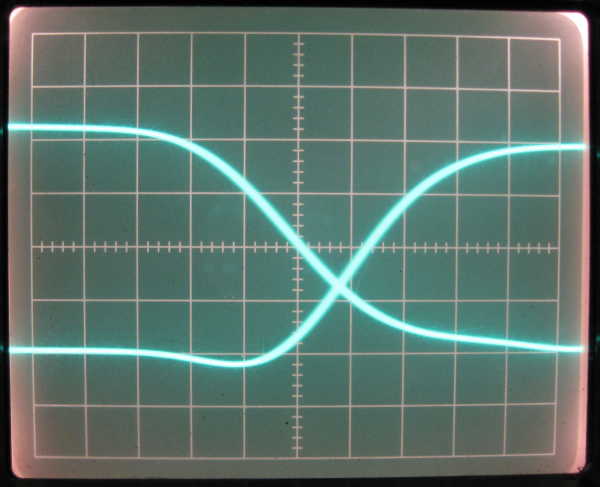 I would argue that we can actually trust the simulated results.

The rise and fall times are very likely faster in reality and just limited by the scope's rise time, but I can think of no reason why the delay between the two signals should not be displayed correctly.

There is one thing to pay attention to: With every low-to-high and high-to-low transition, the two transistors tend to cross-conduct very briefly. At higher frequencies of the input signal (approx. > 2 MHz), the inverter circuit starts to take a lot of current and does weird things...

Electronic – Why is this BJT not going into saturation

There are a few mistakes in the question:

The specified 4.7K resistor for R1 should correct the problem.

One way of working out an appropriate value for R1 would be to work backwards from the collector. Assuming you want R2 to be 1K (for adequate edge rates for the IGBT in this case):