in a normal transmission line example, shown as case-1 in below picture, the signal path and return path are parallel to each other, let's say it takes 1ns for the signal propagate from left side to right side.

however, for case-2, the two paths are not in parallel to each other, then how long does it take for the signal to propagate from one end to another? Is it still 1ns? does the current in signal and return path reaches to the end at the same time?

Thanks for your answer. 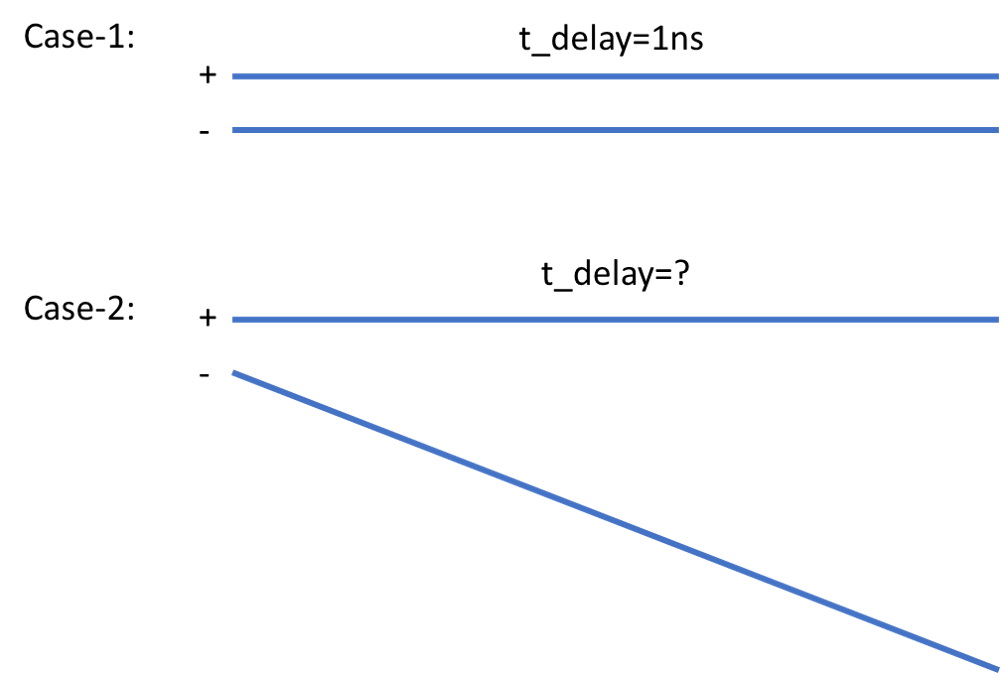 So first off this becomes a lot easier to visualize how it behaves if you just rotate the image a bit like this:

We can now see that for the majority of length of the TL the two wires are balanced and equivalent with each other. It is only at the very end where one wire is a bit longer and sticks out without matching component on the + end. This makes sense when you realize due to the propagation delay a signal traveling along the feedline, prior to any reflections being developed, has no idea what is going to be at the far end. So it wont behave any differently by what is at the far end at first, at least not until it gets there, but we will get to that.

At this point we can think of the feedline as basically a balanced line where the permittivity of free space is a constant, as is the wire diameter, the only part that changes along the line is the separation of the lines. Lets look at the equation for the characteristic impedance of a balanced line:

Here \$k\$ is the permittivity of the dielectric (which is air and thus very close to 1), \$d\$ is the distance between the wires, and \$r\$ is the radius of the wire diameter. Since in this setup everything is held constant other than \$d\$ it should be immediately obvious that as the feedline progresses from the left hand side to the right hand side the characteristic impedance will monotonically increase logarithmically, in other words, we have a balanced line where the characteristic impedance increases as you move down the line.

Now its interesting to note that if we didn't have one line longer than the other and we were to use this transmission line to connect one normal balanced line (with fixed separation) to another one with a different separation we would actually get a broadband impedance matching segment. In fact it doesn't even need to connect two feedlines together, this sort of design could be used to match at the antenna feed point as well. There is a great old video that demonstrates this principle using mechanical waves, though its the same with electrical waves, you can see the video here (you should really watch the whole thing but I am linked to the exact part of the video where they discuss what I just mentioned).

One other thing to note is that should the separation of the wires become too great then the balanced line will begin to radiate. At that point it would be similar to an inverted-vee dipole antenna. That would approximately begin to happen if the separation distance we are dealing with began to approach distances similar to the wavelength of the frequency it is carrying. So long as the feedline separation is significantly less than the wavelength then the separation of the lines alone would not cause it to radiate significantly in the far-field, though like an ordinary balanced line it would be effected by influences in the near-field, including becoming inductively coupled with metal in its surroundings.

So really the only thing we have to reason about now is once the signal gets to the end of the paired wires how does it respond to having an extra length of wire hanging off the end. We could effectively reason about that scenario by considering how an ordinary feedline would respond to having a loose wire of some length attached to just one of its wires on the far end. This would effectively form a single wire antenna, depending on its length and the frequency of the signal would determine how good of an antenna it is and if it would radiate at all. These sorts of antenna arent at all uncommon, most FM radios have a similar setup, however the feedline isnt as poorly designed as it is here typically. If the length of the wire is approaching that of the wavelength then it will likely act like an antenna to some extent, if it is significantly shorter then it wont. Regardless the effective "feedpoint" of the antenna would be the length of the shorter of the two wires. What you will see is that some portion of the incident signal will reflect at this feedpoint, proportional to the degree of impedance mismatch with the antenna wire, and some portion of the signal will radiate from the additional wire segment.

Now typically if one wanted to create a balanced line going into a one-wire antenna (which we would call and unbalanced antenna) then the proper way to do that would be with a balun, which converts a balanced line into an unbalanced one, typically they would be attached to earth ground which serves a few purposes, keep in mind the other half of an unbalanced antenna is either the ground, or a counterpoise or some other metal conductive ground plane.

However because this setup does not have a Balun what you will see is your bottom element will radiate away some portion of energy and the top element does not. Normally a balun would ensure the two lines keep balanced power. This means in the reflected wave you will now have a situation called common-mode signal. In that situation part of the signal is balanced, but whatever portion one of the lines has excess is the common-mode portion. The balanced part of the signal will continue to propagate back along the transmission line normally, where the common-mode signal will act as if the wire is another antenna, but this time the antenna for the common-mode part of the signal is the entire length of the transmission line. With no opposite signal to balance it out this means it will radiate if the wires are long enough.

Coaxial-cable in the above illustration is a standard 50 Ohm intrinsic impedance BNC cable. I know its length and lets say it is 20 meters long. Since we use lumped element model we will not use 50 Ohm right? And capacitance and the inductance will vary with length? In other words, how can I model this cable in LTspice?

A lumped element model of a transmission line with 50 ohms characteristic impedance does not involve a 50 ohm resistive element in series. Characteristic impedance describes the ratio between voltage and current in the travelling wave that can propagate along the line. It doesn't cause any power loss like a series resistance would.

It might involve a series of capacitive and inductive elements in a pi or T section arrangement. A pi-section model of a lossless unbalanced line would look like this:

Obviously this model will fail when the frequency gets too high, because the first and last capacitance elements will effectively short out signals approaching in the forward and reverse directions. By increasing the number of sections you can reduce the capacitance per section in the model, and so increase the frequency where this issue occurs.

The load impedance is not particularly realistic. Typical scope inputs are 1 or 10 Megohms. Scopes designed for measuring reasonably high frequencies will usually have an option to program an input impedance of 50 ohms.

So in this case to achieve impedance matching throughout the line I need a 50 Ohm resistor in parallel with Rload just before Rload to make the Rload 50 Ohm.

Yes, if your scope doesn't have a 50 ohm input impedance option, and reflections become an issue, you can add a 50-ohm parallel resistance at the input to reduce these reflections. It will also reduce the signal seen by the scope.

And I also need to know the Rout and I need to add a series or parallel resistor to it such that its equivalent or Thevenin would be 50 Ohm.

You don't strictly need to match both ends of the transmission line. If you match one end very well it will eliminate reflections that reach that end, so you won't see ringing from multiple reflections.

The 50 Ohm parallel resistor will load the transducer and I will have more error right? It seems to me for sending data this might not be problem but in this case the signal's voltage level is important. What would you suggest in this case?

You could either provide a buffer amplifier at the transducer to produce a signal with low output impedance.

You could move the scope closer to the transducer so that the line can be shorter and impedance matching not needed.

You could provide an RC filter at the transducer output to reduce the edge transition speed so that less high frequency signal is present and impedance matching is not needed.

Also, even if the line effects were negligible somehow, the reflection coefficient would still be nonzero since it's defined by: $$\Gamma =\dfrac{Z_L-Z_o}{Z_L+Z_o}$$ What would be the effect of having a nonzero Γ even when the line effects are considered negligible?

This is exactly what you should expect. The reflection coefficient does not go to zero when the line length goes to 0.

When you're used to working with a computer that does calculations to 10 digits, 0.70 doesn't seem particularly close to 0.85 (it's about a 20% error). But if you were working with a slide rule like early rf engineers did, this error might not be the biggest one in a complex calculation.

Practically, you might only know your \$Z_0\$ to \$\pm\$10% and your load impedance (at a particular frequency in your operating band) to \$\pm\$10%, and you might not know what reactive parasitics are associated with the load, so trying to calculate the load effect more accurately than this would not be sensible anyway.

Of course if your application requires greater accuracy, you are free to adopt your own rule of thumb, such as only ignoring transmission line effects when the line length is less than 1/20 or 1/50 of the wavelength.