My question is:
how I can increase the power by increasing and decreasing the resistance?

In the formula P=V2/R, if I want to increase the power I have to reduce the resistance value as much as I can, but if I decrease the R in the other formula P=I^2*R the power will decrease.

I hope my question is clear:)

You have discovered the issue of impedance matching.

As you noted, the power dissipated by a resistance is:

The first says to get more power you decrease R, but the second says you need to increase it.

OK, but does more or less resistance draw more power from some arbitrary source? That depends on whether the source is more current-like or more voltage-like relative to the existing resistance. We can describe this current-like or voltage-like characteristic with the impedance of the source. Ideal voltage sources have 0 impedance. No matter what current you draw, the voltage stays the same. Likewise, ideal current sources have infinite impedance. No matter their output voltage, the current stays the same.

Now imagine a source with some finite resistance. You can think of it as either a Thevenin or Norton source. Both are equivalent, and will yield the same result. If you put a 0 Ω load across it, you will get maximum current but no voltage. Power is voltage times current, so the power is zero. The power is likewise zero with infinite resistance, since the current is zero.

For example, consider a 10 V source with 2 Ω in series (or equivalently, a 5 A source with 2 Ω across it). Look at a few different load resistances, calculate the voltage or current, and from that the power. You will find that 2 Ω draws the most power. Both a little more and a little less draws less power.

For extra credit, derive the equation for power drawn by a load as a function of resistance. You'll see its maximum is when the load resistance equals the power supply's internal resistance.

Now go back to your original equations and see that they are just special cases of the internal resistance being 0 (voltage source) and infinite (current source).

Electronic – How to set power when given fixed supply voltage

so for a given V and P you just choose R to give the required power.

A possibly simpler way to look at this is to break it down into two steps:

So using the above example, you'd get:

Suppose I had three lamps - each has a different working voltage and takes a different current. What would happen if I connected all three in series and connected them to a 9V battery.

For the purposes of illustration only (keeping it simple) I am assuming the lamps work as pure resistances that don't change their values.

First we calculate the individual resistances of the lamps. In this case 6,24 and 15 ohms.

The current that will flow around the circuit will be

Each lamp will 'drop' a different voltage

Again note that these voltages are not related to the ratings of the devices. 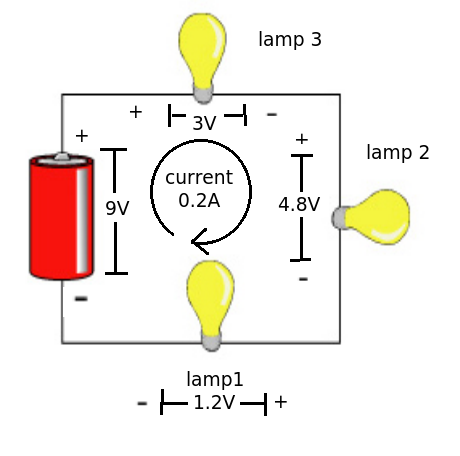