We worked two years on and off on this project at my friend's place. Finally we finish, I take it home. There's a power supply unit but it can't be connected directly to mains, it expects some lower AC voltage. There's a bridge rectifier and a cap directly after the input. I had an 18V AC adapter and connected it. I knew that 18V was an overkill for the 10.5V DC we needed in the end, but the device doesn't draw so much so it wouldn't get too hot, I figured.

The device worked well. I had it turned on for a while and played a bit. Then I started to smell an odd scent. I move closer to the device, smell, and indeed, it's coming from the device. I want to turn it off, but was just half a sec too late and BANG. The big capacitor in the PSU was blown. It was rated 2200uF/16V. Stupid. I can be happy we put the device already in its case, otherwise it would've exploded in my face.

Anyway, what do I do now? Of course, I need to replace the capacitor itself. But I heard once that there's acid inside the capacitor. Can I safely touch the capacitor to remove it or are there safety issues? And what is the best way to remove the small fibers that are everywhere? How should I go about that, a safe way?

Then, do I need to worry about the circuit around it? Everything worked fine until it exploded, so I don't think other components suffered over-voltage or something like that – but could other components be damaged because of the bang? There's some LM317s, the bridge rectifier, some potentiometers, and some small capacitors. A bit further away, what I'm most worried about, the DDS and a crystal oscillator – you can see it on the picture, the DDS is on the green board next to the crystal oscillator.

And then there's the smoke and the smell – is it dangerous? This is my bedroom.

The PCB with the DDS (in the bottom right of the picture) seems to have gotten some damage on the bottom. The copper traces don't conduct anymore when measuring on the copper, there's some kind of foil on it. The parts themselves are still connected though, when measuring from part to part. Would this be a problem? 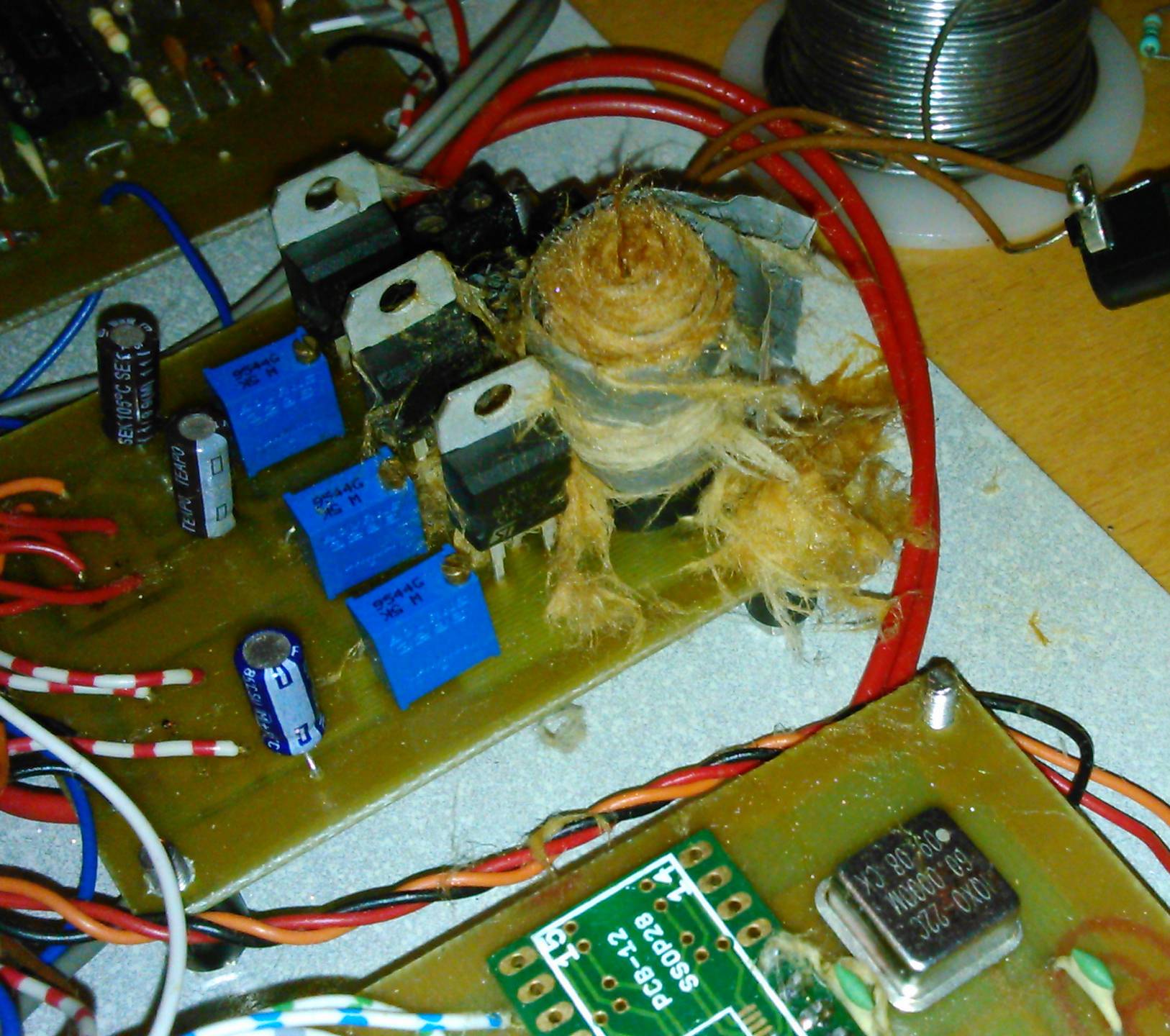 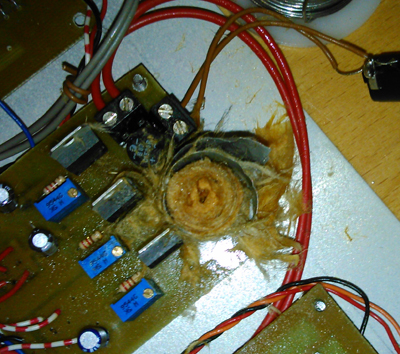 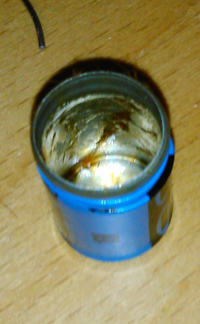 Here's the circuit diagram of the PSU. The white dot in the center is an alternative ground symbol.

I don't think the electrolyte is particularly nasty stuff. Electrolytics have been in use for about 80 years now (and failing!) and I've not heard of any major health scares, so I'd suggest you're OK with basic precautions - use rubber gloves getting it off, and wash those PCBs with flux cleaner to be on the safe side.

One place I worked sent a not exactly glowing report to a PSU manufacturer, with a footnote that the brown stains on the cover were from their reservoir cap, which "failed" in similar fashion, right after the report was printed.

I recommend resistance measurements on the bridge rectifier, in case any of the diodes failed short-circuit (the cap may have short circuited briefly, stressing the bridge), but everything else should be OK. And as the bridge has passed your tests I wouldn't bother replacing it.

As these look like home etched boards, I suspect the difficulty making resistance measurements may simply be the original photo-resist;if pin to pin measurements are OK, that's what matters. Look at the PCB in a year or so : if the copper is bright green and corroded, I was wrong...

From the information provided it sounds either like a faulty battery or a very high current drain from the equipment - or both.

Update 1 : Having seen the most impressive photo, my prior assessment stands. This would be extremely unusual. A large amount of energy seems to have been involved. If there were 3 or more batteries in series (were there?) and one was reversed this may happen as the current would be driven through it backwards.

This strongly suggests a bad battery - possibly a counterfeit one. 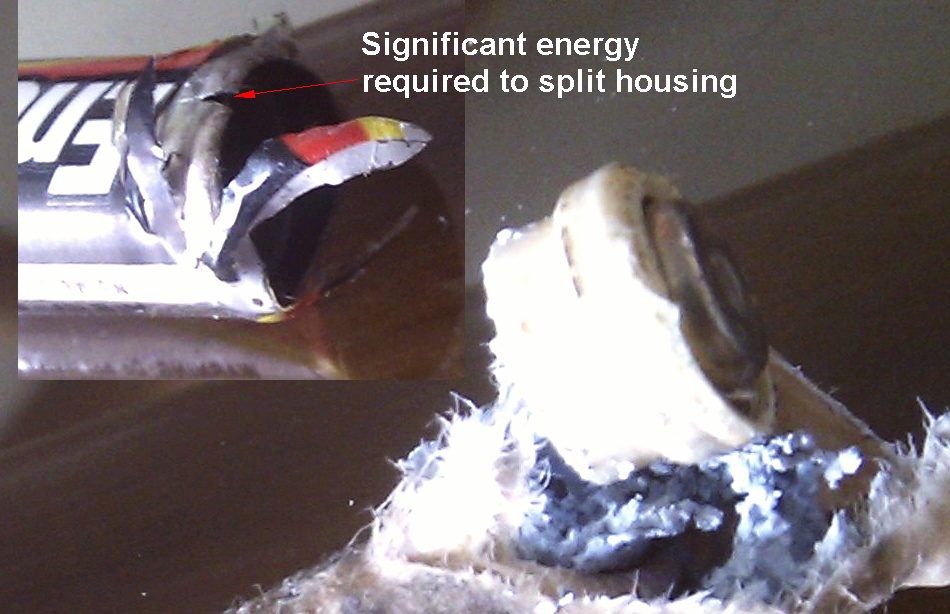 We now know there are two batteries.
This is less than the 3 minimum needed to drive current backwards through one battery so the back discharge mode seems unlikely.
it is still possible with one well charged battery and one fully discharged.
The good battery can effectively reverse polarity charge the dead battery.
Unlikely but possible in this case.

IR remote controls pulse IR LEDs with short pulses of very high current - possibly an amp or more. Most batteries should either provide this or just gracefully fail to do so. A very poor quality battery or a faulty one MAY be affected by such a load.

If the IR control stayed on for some reason then a continued high current may occur. If this happens the IR LED would probably die. If your control still works with a nw battery then this is probably NOT what happened.

It is EXTREMELY unusual for an AAA cell to "explode" in use. You need to say if it was an alkaline, or NimH or ??? type cell.

Some appliances allow charging of the battery inside the equipment. If a non rechargeable battery is charged it MAY explode. This would be rare and it is unlikely your remote allowed charging.

What sort of battery - Alkaline, NimH, other?
Ability to deliver high current may increase chances of "energetic" reaction.

How many AA batteries in remote?
Three batteries are required in series for reversal of one battery to cause significant reverse current flow when all batteries are in good condition. (ie one "forward" battery opposes the reversed battery and the remaining 'forward' battery supplies forward current.

Age of battery (time in use)

Was a non-rechargable battery charged? Can 'cause problems'.