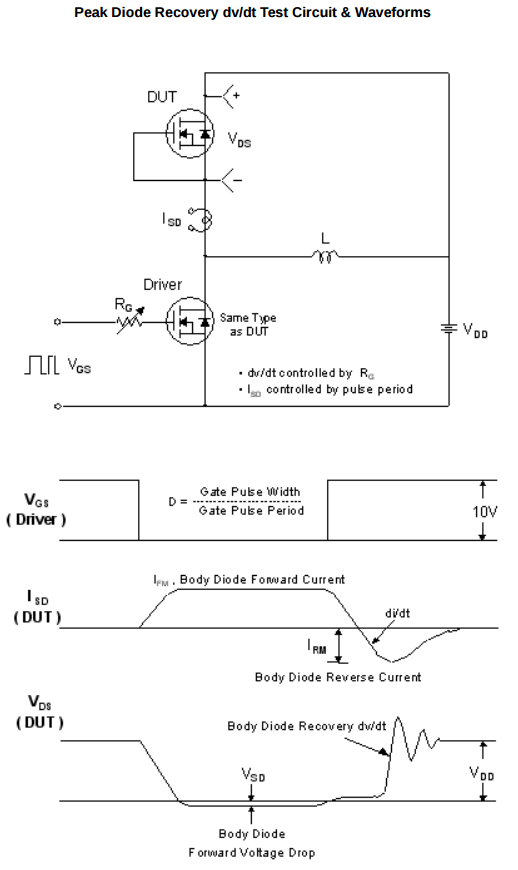 What I am having difficulty understanding are the reasons behind overshoot and ringing in V_DS.

Now, to what I already know:

As far as I can tell, the potential of the positive probe, V_D, never changes, so for an overshoot to happen, the negative probe has to go below the negative pin of the power supply. I cannot see what can cause this.

Why the ringing after overshoot? I have talked with a teacher that only has a general knowledge in electronics and he suggested that it could be a parasitic capacitance somewhere that was auto-oscillating with the inductance. I would like to know what exactly causes this.

What I am having difficulty understanding are the reasons behind overshoot and ringing in V_DS.

The ringing is due to the parasitic capacitance of the MOSFET reacting with the inductor as an underdamped 2nd order system. This capacitance can be in the range of 100 pF to 1nF. Read the MOSFET data sheet - it looks like it will be about 900 pF.

Try probing on the power supply rail. I bet you see those spikes on there. It'll be due to the lead length between your bench supply and the MOSFETs. Clearly you won't see it on the lower FET side because your scope is referenced to that rail but, if you probed back at the power supply I bet you would.

Try a 1uF or 10uF ceramic across the power rails close the MOSFETs.

In a nutshell, bipolar junction transistors work because of the physical geometry of the two junctions. The base layer is very thin, and the charge carriers that are flowing from the emitter to the base do not recombine right away — most of them pass right through the base altogether and enter the depletion region of the reverse-biased base-collector junction. Once this happens, the strong field in this region quickly sweeps them the rest of the way to the collector terminal, becoming the collector current.