The way I want it to work is to slowly discharge the lipo down to storage voltage and then stop. I think the best way to do this is to use a TL431 to control the voltage shutoff and use a power resistor and status LED as a load. I don't really understand completely how to calculate the proper resistor values. I have done a few calculations and gotten what I think are the right values, but I wanted a sanity check. Below is a image of the schematic I have drawn. 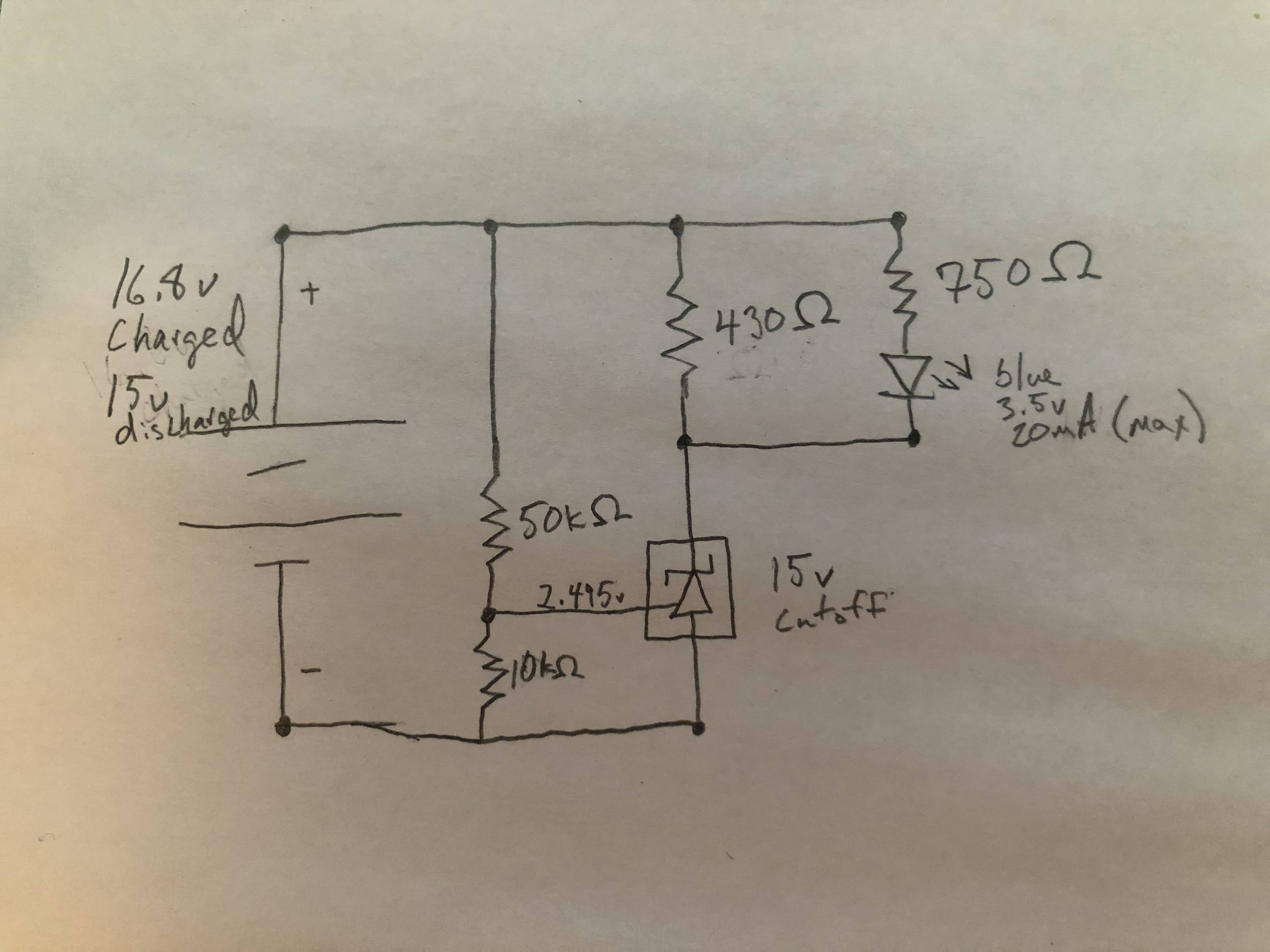 As it turns out, I had the parts lying around, so I made and tested a similar circuit to what you drew. I've posted the exact, currently-on-a-breadboard schematic as well as an equivalent schematic below.

(Note that the AZ431 is Diodes Incorporated's version of the TL431 and is, as far as I can tell, functionally equivalent in every practical regard)

Two main differences from your circuit: I added a P-channel MOSFET to make a latching switch and I also changed the resistor values across the board, for a variety of reasons. If you have the listed resistors lying about, you can use them, but make sure their power rating is sufficient. In particular, the power equation to use is \$V^2/R\$, which for your load resistor would be 656mW (16.8V*16.8V/430Ohm). Most standard resistors are 1/4W rated, which would make that well out of spec.

I also reduced the values of the voltage divider resistors by an order of magnitude, for two reasons. First, the TL431 draws a few uA of current into the reference pin, so a lower impedance means a lower offset for the output. Second, the entire purpose of the circuit is to drain current, so less resistance is better.

The 2.2k load resistors should each draw about 125mW of power max, well within spec. You can add more 2.2k resistors for faster discharge; each will sink about 7.5mA of current. The 1k LED resistor is a little close at about 225mW, but bumping that one up to 2.2k would mean only ~7mA for the LEDs, which is pretty mediocre.

You'll notice I've added a red LED opposite the green one. This is to act as a reverse voltage indicator, because both the TL431 and MOSFET will conduct if reverse polarized. This is the only polarity protection in the circuit, though if you felt the need, you could modify the circuit around the MOSFET like so: 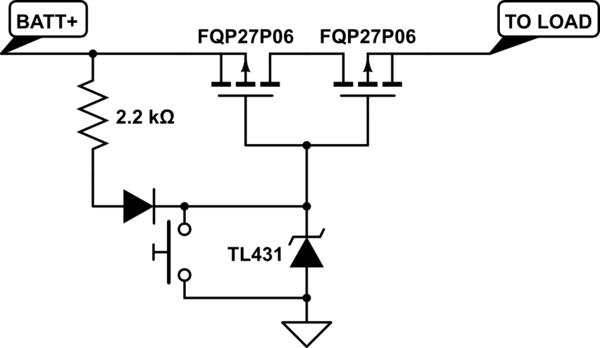 When I tested the actual circuit, my results were as follows. With the battery oriented correctly, the circuit draws 57mA at 16.8V, in good agreement with the 54mA calculated value. Draining a lipo to storage voltage typically means putting it at ~30-40% of rated mAh capacity, so for a 2200mAh battery this process would take about 24 hours with this circuit. You can speed the process up by adding more load resistors in parallel, or by reducing their resistance (check their power rating first).

When dialing the voltage down, the circuit cuts off at the transition from 15.00V to 14.99V, not bad for 5% tolerance resistors. The use of the MOSFET means that when the circuit switches off, no current is drawn. (Any residual current is so low as to be literally beyond my capability to measure; my multimeter reports 000.0uA).

If the battery is flipped, the circuit draws 54mA, with the notable downside that it is only 'controlled' by Ohm's law. If you're using connectors such as XT60s, reverse polarizing the circuit will be quite difficult, but if you're just plugging wires into the balance connector, I recommend at least putting an indicator LED in the circuit (the red one) or using the polarity protection modification above.

Lastly, you can toss a two-wire mini-voltmeter on the load side of the circuit if you want to view the voltage in real time and also drain a bit more current. They can be gotten for <10$ at a variety of online stores.

The protection circuit protects the LiPo from many dangerous conditions. Overvoltage can be ignored here, as you are not going to charge the cells from your circuit. Undervoltage (i.e., overdischarging the battery) can be fatal to the cell, although not immediately dangerous (the big issues might arrive later, when charging). The other protections that are common are overcurrent/short-circuit, which is a very important one, as a shorted LiPo can potentially explode, and overtemperature, which is mostly useful while charging, or while discharging at very high rates.

For your particular application, if you take care all the time of the battery voltage (making sure it does not overdischarge), and only use a proper charger to charge it, I don't see a major problem in running your circuit for test purposes without the protection. However, make sure you add a fuse between the battery and the power input of your circuit, to prevent dangerous conditions in case of overcurrent or short-circuit. This is very important. LiPo batteries can be very dangerous. If you have a LiPo protection bag, use it, as long as you're testing without the protection: better be a bit too careful than not enough.

Concerning a hand-solderable protection IC: I recently used a DS2777 (for a 2-cell system), it works pretty well, and even if it is a SMD part, it can still be soldered by hand, although it's not simple. But is possibly a bit "overkill" for your application, as it requires two external MOSFETs, and is not only a protection circuit but also a battery monitor system that can estimate remaining charge, read battery parameters (voltage, current, accumulated power, etc.) over I2C, etc.

I suspect that you are connecting Aref to the regulator output.

While you have sufficient voltage, and the regulator provides the correct (i.e. expected) voltage, you get correct readings.

When the battery falls below a limit, the output at the regulator falls, and will always be the input V minus its drop. The ADC will always read the same voltage (since regulator output = Aref = Battery - Reg. Drop), which happens to be a higher ADC value than before this condition.

You need a better reference voltage at Aref. You can, for example, use a Zener with a drop less than 2.8V, and a voltage divider to feed the ADC.

Update: (Regarding your comment) You should add a better reference voltage to Aref. Since you observe the problem it is a good practice to fix it. Your arduino the way it works now cannot tell whether the battery is dead or fully charged, which is not a good idea.

Another point is that you risk damaging your arduino, as you are bringing Aref above Vcc. There is limit for this (I can't remember, check datasheet).

Finally is is also a bad practice to rely on something you observed (and it is not a guaranteed specification), since it may soon behave differently. Save yourself from headaches, and design following good practices.