Are there differences between

Where should we use (x downto y)? Same question is for (y to x).

Notation : x and y are integer

This is where you can tell that VHDL was invented by a government committee. If VHDL was designed to be consistent then what you're referring to as "to" would be called "upto"-- as in the opposite of "downto". In this answer I will refer to "upto". Just understand that I'm using this term for clarity-- it still isn't an official VHDL keyword.

Vectors, or arrays, can have a range that is decending or assending. For example:

This is strictly a numbering convention and has little to do with the resulting logic efficiency. Mostly, the correct one to use depends on what makes the most sense to the writer of the code.

Mixing downto and upto in the same code is always problematic. It can be done, but it requires careful planning and notation to get right. Even then, the code ends up to be difficult to read and modify later. It is very easy to confuse which signals are downto and which are upto.

Most busses are numbered using "N downto 0", where bit 0 is the least significant and N is the most significant. Because of this, downto is the most important of the two. And since we don't want to mix downto and upto, upto is given the boot. In every case where I've used upto, I have regretted it and usually ended up rewriting the code.

Understand that the use/misuse of upto mainly becomes an issue in large "programs". It makes it hard to share modules (a.k.a. code reuse), and hard to maintain and debug code. If you're just writing a page or two of VHDL then it might not matter. But if you're writing FPGA's with 30,000+ lines of VHDL then this will be a huge issue.

There are only a few downsides to only using downto. But the downsides are tiny compared to the problems I've encountered mixing downto and upto.

As a side note: The guy who decided to make the PowerPC busses reversed (with bit 0 being the most significant bit) should be tar'd and feathered. Or at least forced to watch Richard Simmons 24x7 while in solitary confinement. Just sayin.

In VHDL (and HDLs in general) a for loop does not denote sequential execution like it does in a software programming language — it denotes the construction of multiple parallel instances of the hardware described in the body of the loop.

In your case, you have many assignments to the same variable BCD/bcd, and these are conflicting with each other. If you really intend to construct a system based on two shift registers (one binary, one bcd) that takes 14 clock periods to do the conversion, then you need to describe the hardware that way, and set up a state machine to control it.

On the other hand, if you really want to do it entirely combinatorially, then you need to create different intermediate variables (e.g., arrays that are indexed by the loop control variable) to hold the results at each stage.

Electronic – Difference between If-else and Case statement in VHDL

Can anyone tell me the difference between If-Else construct and Case statement constructs of a process in VHDL in terms of how the code is inferenced into RTL circuit by the synthesis tool ? 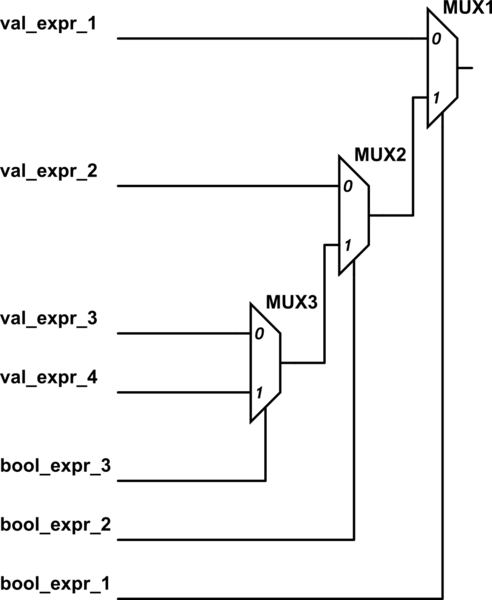 The case construct, on the other hand, infers a big ol' mux: 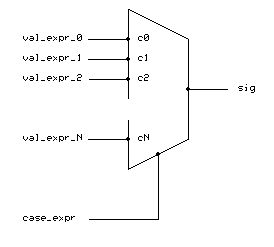 Obviously these are very simplified designs with only one value expression, resulting in one output.

Do consider the case of multiple nested if-else and mixing case-statements with if-else construct inside a process.

Per the above, you can see how they would nest/mix.

Also when to use which construct ?

Since if-else infers priority, it should be used when more than one input condition could occur. Using case, one the other hand, is appropriate when the inputs are mutually exclusive.