In a previous question I finally cracked the code on deriving for myself the transfer function for a Type 2(a) compensator like this one, built around an op amp. 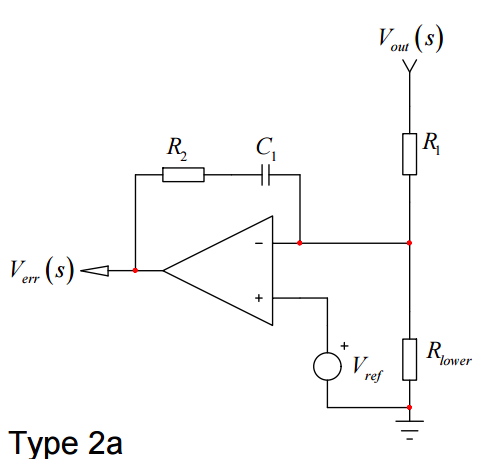 As it turns out, for AC analysis purposes, that configuration is exactly like an augmenting integrator circuit, depicted below, except that the feedback resistor (\$R_O\$) and capacitor (\$C_O\$) are transposed in their branch. (Note that the resistor denoted above as \$R_{lower}\$ "disappears" from the Type 2a controller in AC analysis. The op amp inputs are equal (or very close to it) so no current flows through that resistor.) 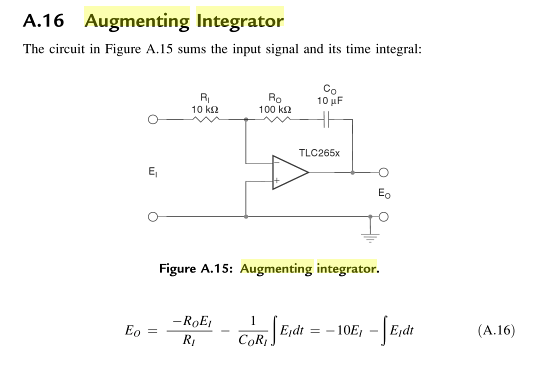 Unsurprisingly, I get the exact same transfer function, regardless of the order in which the two local feedback devices appear.

So my question is: Is the Type 2a controller circuit just an example of an augmenting integrator? Does it matter whether the capacitor is connected to the output node or the inverting input?

I've seen the Type 2a circuit referred to as an "integrator" or "integrating element" in various sources, but with no further elaboration. I was initially puzzled by why it didn't look like a classical op amp integrator, which lacks the resistor in the local feedback loop, and am suspecting this may be why. And, mathematically, at least for impedance, the order of those two components doesn't matter. Intuitively it seems like there must be some difference, although perhaps a subtle one. In actual circuits the capacitor invariably appears on the inverting input side.

Can you illuminate? Extra admiration if in the process you can explain how an augmenting integrator is different than a regular one (which also appears in PID controllers) and intuitively why an augmenting one is the right choice here. If that's really a separate question just let me know and I'll post it separately 🙂

As you probably know, the op-amp circuit is working inside a feedback system thus the DC operating point of the op-amp is sustained.

When the output signal is changing rapidly the integrator (without the series feedback resistor) presents a very small feedback signal - basically it's an integrator but, with the resistor in place the dominant impedance under these circumstances is that resistor.

Remember I'm talking about a scenario where the "process" output is changing fairly quickly and therefore the cap looks like a short and the gain of the op-amp is -R0/R1 (ref your bottom circuit) - this is good-old-fashioned proportional control and it drives the "system" into "lock" much quicker than if a pure integrator is used. Once close to "lock" the capacitor starts to dominate and the basic gain of the op-amp circuit rises from the baseline of -R0/R1 to that of an integrator.

I had to design a self-tracking FM demodulator once and the local oscillator had to rapidly lock-on to the carrier frequency. I could have used a pure integrator but I got significantly faster lock-in times with series R+C.

Anyway that's a non-mathematical explanation - it's the P and I of a PID controller and, if you put a series RC across R1 then it's a type of PID controller.