I know that the answer to my question is "Yes, it is!". The ground connection is needed to avoid a person touching a metallic part of faulty equipment to be electrically shocked. So the person acts as the conductor closing the circuit between the high voltage metallic part and the ground (at zero volt by definition). The grounding connection hence offers an alternative path for the current to flow, and this happens because somewhere along the power distribution system, the neutral wire N is connected to a metallic rod planted into the ground.
My question is: what if this neutral wire – ground connection is removed, as illustrated in the picture? This would make the ground wire in home electric sockets unnecessary, since a person touching the metallic case of a faulty equipment doesn't close the circuit, because there is not the circuit including the ground. So, as I understand it, this would work (maybe) if the power distribution system is not grounded anywhere. Is this possible to realize a totally floating-from-ground power distribution system? I am pretty sure the answer is no, but I don't know why… so, why is not possible???
Thank you. 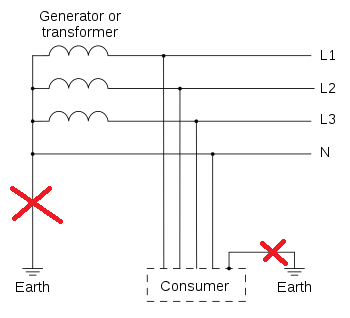 What you are not considering is that an earthed chassis or metal box containing a "rogue" live connection will be self-revealing should a fault occur that causes live to touch the earthed metal. It will blow a fuse and within a few milliseconds the problem is made safe and revealed.

For an isolated AC source (such as the secondary of an isolation transformer), there is nothing to reveal that live may have come into contact with the metal box. You can touch it and maybe receive a small tingle but, it isn't clearly self-revealing.

Fault 1 has occurred and it is not self-revealing...

Some time later, another fault occurs that can be anywhere on your street and in any of the houses on that street. That fault causes neutral to become connected to earth.

Fault 2 won't self-reveal either because it won't blow a fuse: -

Then you touch the unearthed metal box or chassis: - 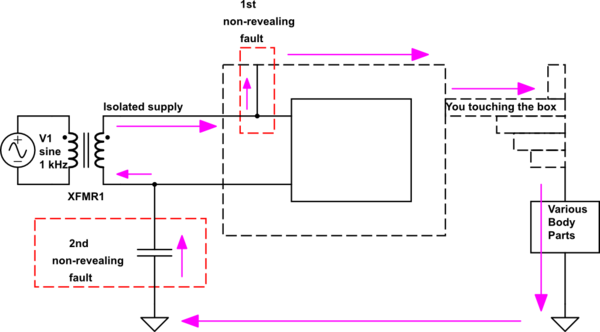 The magenta arrows show the flow of electrocution current

Now, the metal box is a death trap (because it isn't earthed) and is awaiting the next unlucky person to come along and touch it. Nothing has revealed itself that tells you a dangerous situation has arisen.

The first "hint" (if you survive the hint) is electrocution.

Electronic – Why we use ground

Ground connection or referencing is used when it is used because long experience has shown it to be the best choice in practice. "Reinventing the grounding "wheel"" may have its place in some cases, but usually not. In many cases there are competing aspects, but the overall best result is gained by using ground. Power distribution systems are one such example.

Mains or grid voltage systems would be safer if the system was entirely NON ground referenced, and this is the principle that safety "isolation transformers" use BUT the moment that a fault fully or partially grounds one leg of the system anywhere on a circuit then the whole system becomes lethally dangerous to users.

Note that ONLY ONE tool should be used with an isolation transformer, and the transformer should be located near the tool. Using long cable runs after the transformer and two or more tools risks a fault to ground in one tool or wiring leaving the other unprotected.

The difficulty in keeping a system isolated is in practice (which is what counts) far harder than the issues caused by grounding. Some shipboard power systems do have both conductors floating relative to ship ground (= seawater potential when you are floating in salt water) BUT and fault to ground is dangerous, as above, ad great effort is made to track down and remove any ground faults. In a land based system that was not ground referenced, any fault to ground on the same phase would affect all users on the same phase. So a whole street of houses may be affected by a fault on one circuit in one house.

Once you have a ground referenced system the safety aspects of detection and management for individual circuits are easily handled. Earthed housings provide both protection and detection, fault currents flow to ground and can be either "encouraged" to allow easy fault termination (fuses) or detected at very low level (ELCB / GFI). Ground referencing is an overall positive in domestic power systems.

Few modern systems use ground as an actual conductor.
SWER (Single Wire Earth Return) power systems were much used at one time and are still used in some rural systems. I saw one here (NZ)some months ago but they are rare. They are in fact very useful and cost effective but are generally eliminated for reasons which often do not make technical sense. The cost of providing a good enough ground connection at each end is in most cases low compared to he cost of many km of adding an extra conductor. 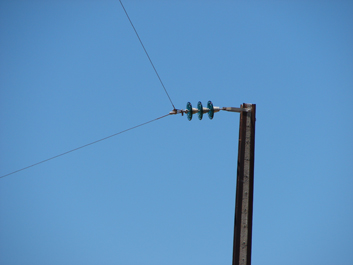 SWER - Australian experience with application to developing country use

RF signals are often "launched" as imbalanced signals against a phantom image reflected in the ground. A typical quarter wave vertical radiator has an implicit image reflected in the ground plane. The tall towers of AM brodcast stations almost all use this system. There are economies in materials used compared with dipole or other antennas, radiation pattern is omnidirectional and radiation angles are suited to direct wave communications - most audiences are near the transmitter for AM broadcast stations.

In systems that need grounding, techniques have been developed to provide grounds which are adequately good to adequately minimise the effects of local conditions. Ground proper is of essentially zero resistance as it is of sensibly infinite size. Connecting the local ground to the actual ground is the challenge and methods and needs are well understood for each relevant application.

The main point of grounding a line-powered appliance is to electrically "box up" the dangerous parts. If, for example, a "hot" wire comes loose inside the appliance and touches the metal case, the current will flow thru the ground connection to that case. That will blow a fuse, trip a breaker, or trigger the ground fault interruptor if that line is equipped with one.

If the case weren't grounded, then the same loose wire now puts the case at the hot potential. If you come along and touch it and something else grounded, like a faucet, at the same time, the full 220 V is now applied across your body.

You are right that touching just a hot wire without touching anything else conductive won't hurt you. Presumably the "tile" floor you are talking about is made of insulating material. However, the reason this is unsafe is that often you are not completely insulated from everything else. If you touch the faulty appliance and happen to brush against a water faucet, the case of your desktop computer, a radiator, or any other appliance that is ground, you can be seriously hurt. Even a concrete floor can carry enough current to be dangerous.