I have read at numerous places that NAND gate is preferred over NOR gate in industry. The reasons given online say:

NAND has lesser delay than Nor due to the NAND PMOS (size 2 and in parallel) when compared to NOR PMOS (size 4 in series).

According to my understanding delay would be the same. This is how I think it works:

As you were saying, the equation for delay is $$Delay = t(gh+p)$$ But the logical effort \$g\$ for NAND is less than that of NOR. Consider the figure showing 2 input CMOS NAND and NOR gate. The number against each transistor is a measure of size and hence capacitance. 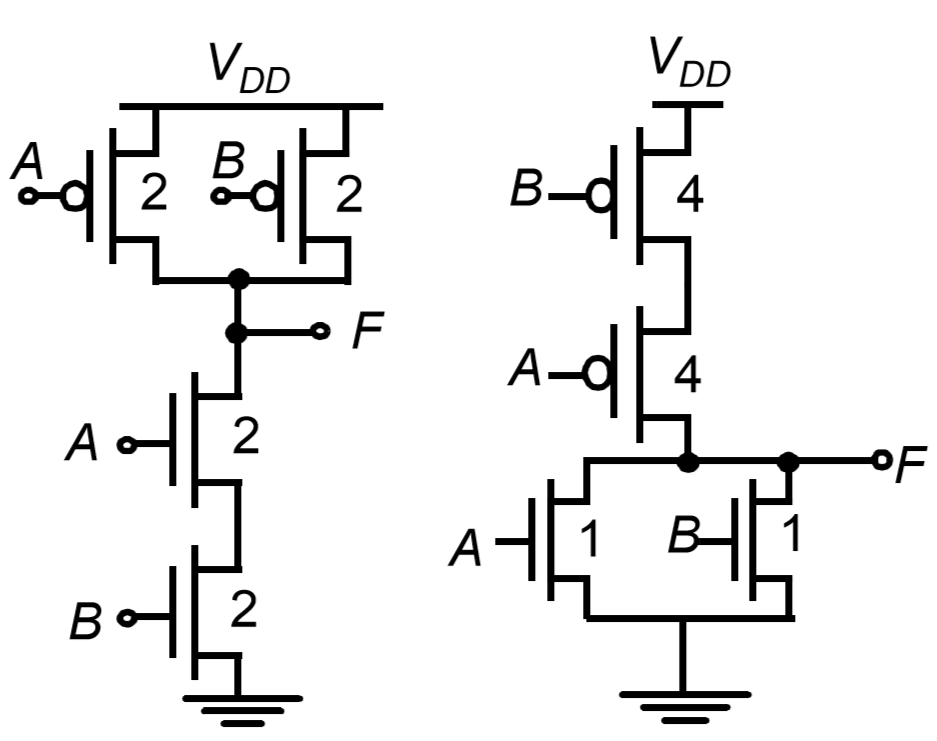 \$h=1\$ for a gate (NAND or NOR) driving the same gate and \$p=2\$ for both NAND and NOR. Hence NAND has lesser delay when compared with NOR.

EDIT: I have two more points to but and I am not 100% sure about the last point.

Adding the sizes of transistors in figure, it is clear that size of NOR is greater than that of NAND. And this difference in size will increase as the number of inputs are increased.

NOR gate will occupy more silicon area than NAND gate.

Considering the figure again, all the transistors in NAND gate have equal size where as NOR gates don't. Which reduces manufacturing cost of NAND gate. When considering gates with more inputs, NOR gates requires transistors of 2 different sizes whose size difference is more when comparing with NAND gates.

Electronic – A quick way to remember NAND & NOR logic

If you have an existing schematic consisting of Inverters, AND, and OR Gates, then there is a simple, three step process that you can follow to convert the circuit to all NAND (you can modify the process slightly for NOR). You can use "Bubble Logic".

Let's assume you have three levels of logic. The first level, closest to your inputs, consists of inverters. The second level consists of AND gates. And the final level consists of just a single OR gate. Some textbooks may refer to this as being a "sum of products" Boolean Algebra expression.

You could do a similar process for an all NOR implementation. I hope that helps!

First of all, I am wondering if this is how it's actually done: i.e. when Intel makes a CPU, do they build all the registers, etc. using NAND/NOR gates, or do they have some other fancier way of doing things?

Registers aren't made out of gates, most often they are dedicated circuits. They can be seen as made with inverters (NOT), but only to a certain extent.

Also in dynamic logic, it's simpler to cascade two inverting blocks than putting NOT gates everywhere.

Consider that in some cases a circuit may be made out of separated blocks, so there may be a case in which the output is interfaced through one or more inverters for buffering.

And there is another advantage in that: integration. Having a small number of different gates helps in laying out the circuit, and uniforming the performance. Often libraries include logic blocks at different levels of complexity: transistor, gate, operator, or higher.