I built an audio amp out of the LM386 on a previous question. I when I have nothing connected, I picked up FM radio stations, as well as AM Very loud and clear. Why is this happening? Why AM and FM?

How can I prevent this? Although it is very cool that I picked up the stations, I don't want to have any interference.

Radio frequencies from AM stations get into audio amplifiers not only through the inputs, but also via the outputs.

Production amplifiers usually include a Boucherot Cell on the output, often an output inductor after that. Both of these devices can help block incoming RF, even though it's not their main function. The Boucherot cell is simply a capacitor in series with a resistor, placed between the output and ground. Common values are 0.1uF and 10 ohms. You can see this in many amplifier schematics. Edit: I see there is a 10 ohm/0.047uF cell in the amplifier; did you install that in the built circuit?

When you say "nothing connected", of course you have the speaker connected, which is how you hear the radio stations!

There is also the possibility that the circuit itself is picking up interference. There is a reason why amplifiers are built built into metal boxes and why fuss is made over any internal wiring and in particular grounding! If your power amp is just bare components on a breadboard, don't be surprised if it is susceptible. Radio waves are falling on your nest of wires and components. You have high gain in your circuit, and nonlinearities, so these oscillations are amplified and rectified.

There is also the power supply connection. A single-supply amplifier like the LM386 is very susceptible to noise coming in over the power supply. You have to bypass the power supply very well. A single large capacitor may not be enough; you need a small 0.1 uF ceramic close to the IC power pins.

Electronic – Picking a DAC for an audio amplfier

DACs have different requirements depending on the application. You'll find high precision solutions using expensive components to get good absolute precision, but in audio you don't need that. Linearity is the most important parameter.

Since you'll be using an ATmega2560 which comes in a 100-pin package you can probably spare 16 I/Os, and then I would choose for parallel I/O. You'll have less timing problems than when working with serial I/O like I2S.

edit
Will seems to favor I2S and he has a point on condition that you want to connect to other, (semi-)professional audio equipment. As I understand it your digital audio path is very local, restricted to the connection between your AVR and the DAC. And then I would stick with the parallel. For 44.1kHz sample rate choose a crystal that allows you to get an interrupt every 22.676\$\mu\$s. Use the interrupt to automatically latch the last sample into the DAC, and then you have lots of time to prepare your next sample. That's the only timing you're dependent on. With I2S on the other hand you'll have more things to do. You may use SPI to shift the data out, but in the middle of a word you'll have to toggle the word clock. Things you don't have to worry about with parallel I/O.

The simplest ADC is an R-2R resistor ladder. The linearity depends on the resistors' matching, and there lies the problem for a discrete solution. You would need rather expensive precision resistors. The integrated approach is much better. The AD5547 also uses an R-2R ladder network (see fig. 17 on page 12), so why is this better than discretes? Integrated resistors (and capacitors) may have some tolerance on their nominal value, but their mutual match is the best you can get. So the 80k\$\Omega\$ resistors may be 80.5k\$\Omega\$, but you're sure they're all that value, and that's more important than the actual value itself.
The AD5547 accepts a 5V power supply and is 16-bit parallel in. 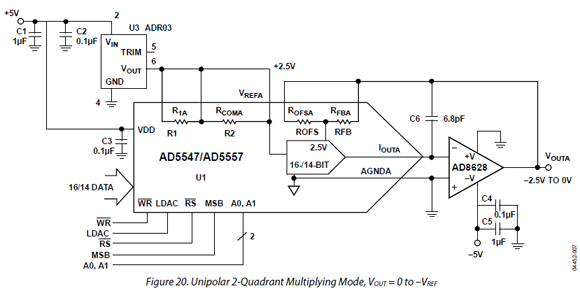 The application schematic is from the datasheet, so look there if this isn't very readable.

The DAC is registered, which means you can use the latch to update several DACs simultaneously, but you can make it asynchronous and transparent too by making/WR low and LDAC high (see page 13). Then the output will be continuously updated. But this is only possible if all inputs are updated simultaneously! With an 8-bit microcontroller you will probably write to 2 I/O ports, and then you'll need the latch!
Like most DACs it's current output, so you need to convert it to voltage. In this application with the AD8628 they use a RRIO (Rail-to-Rail I/O) opamp whose specs match the required resolution, but you can use another opamp if you like.
The ADR03 is a precision voltage reference, low drift and such, which for an audio application is overkill. Just make sure that your voltage reference is ripple and noise free!

edit
David rightly comments that this is somewhat older technology, but I thought it is OK since you're using a microcontroller (in lieu of a DSP) and a less-than-perfect class-D amplifier anyway. I picked this for my answer also because it is easy to understand.
David also mentions sigma-delta DACs, which have indeed better performance, but their working principle is a bit more complex, and they're (almost?) without exception serially controlled, for which the AVR doesn't have the hardware.

Your mention of the frequency (97.5 MHz) tells us this is an FM receiver. (AM will behave differently, as will other modulation schemes).

Because FM is encoded by modulating the signal frequency, anything to do with AM is undesirable. To deal with this, most receivers over-amplify the signal until it becomes larger than the later stages can pass. The signal then "clips" to the voltage of that amplifier. This stage is called a "limiter"--it limits the amplitude to some fixed value. In theory, any signal weaker than that drops out and just becomes noise, and any signal stronger than that has a very nice fixed level that the FM detector can handle without having to worry about amplitude variations.

The amplifier-limiter stages create a phenomenon called "capture", where the strong signal tends to eliminate the weaker one. This is why you hear only one station.

If the signals were very close in strength, you would indeed hear them "mixing together", but that only happens for a fraction of a second as the signal levels rapidly change (presumably, you are in a vehicle), so you normally don't hear that.