In 2013 the California Independent System Operator (CAISO) published this image, dubbed it "the duck curve", and took the internet by storm (or, at least the part of the internet that tracks trends in renewable electricity generation): 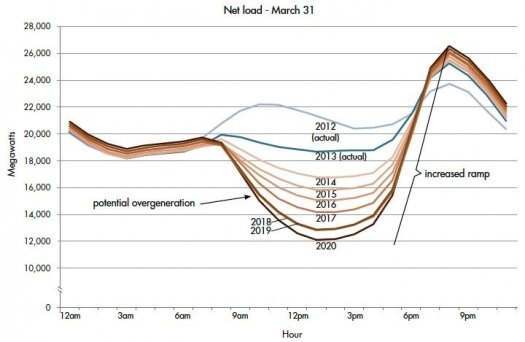 Here's an explanation of the duck curve from Wikipedia:

[The] curve comes from the Net Load ("the difference between expected load and anticipated electricity production from the range of renewable energy sources"). In certain times of the year (namely Spring and Summer), the curves create a “belly” appearance in the midday that then drastically increases portraying an “arch” similar to the neck of a duck, consequently the name “The Duck Chart.”

Essentially, solar production causes a reduction in net demand in the mid-day (the belly). Later, sunset coincides with increased demand, causing a sharp ramp in demand (the neck).

This image generated lots of interest and people are still talking about it today — lots of search results in the past year are still showing the same image.

But the most recent actual data on the chart is from 2013, and the duck shape was created by the projected net load curves from 2014 through 2020.

I tried to find some recent data from CAISO to see where things stand. To do this, I assume I'll need hourly historical demand and solar production data, in order to calculate net load.

CAISO's OASIS tool includes historical load data, but as far as I could tell solar data is only included lumped with wind, and only goes back to 2016.

Has someone published an updated version of this chart? If not, where can I find historical hourly solar generation to reproduce it myself?

Electronic – In the USA, the grid transmits power at/around 60Hz. How big of a frequency deviation can the grid handle before relays trip and cause a blackout

Long answer: Frequency is regulated tightly because it's how the overall load in the grid is controlled. If there's a runaway to lower frequencies, that usually means there is a short-circuit near a major power station or hub. So that will drop out soon. Then there usually is a runaway to higher frequencies because of the dropped load. So things escalate very quickly if the grid has many gigawatts power stations. And you don't want that.

In weak grids on the contrary, the frequency may swing much more. Eastern European countries typically allowed 47Hz to 53Hz. That's acceptable if there's only a few power stations and a few big consumers. The same for emergency generators and isolated grids on islands.

What limits the frequency downwards is power conversion in transformers and AC motors. The lower the frequency is, the lower the primary voltage needs to be not to overexcite the iron parts by the magnetic fields. So a substantial frequency drop has to be accompanied by a voltage drop too, and that's what is done in weak grids to allow lower frequencies.

Its not free energy to the system.

What the ideal current source does is facilitates forcing current around the loads & from the supply.

If there are loads forcing current to flow, the resultant VA can be measured and the affect on voltage distortion can be seen at the utility