Assume we have the following circuit 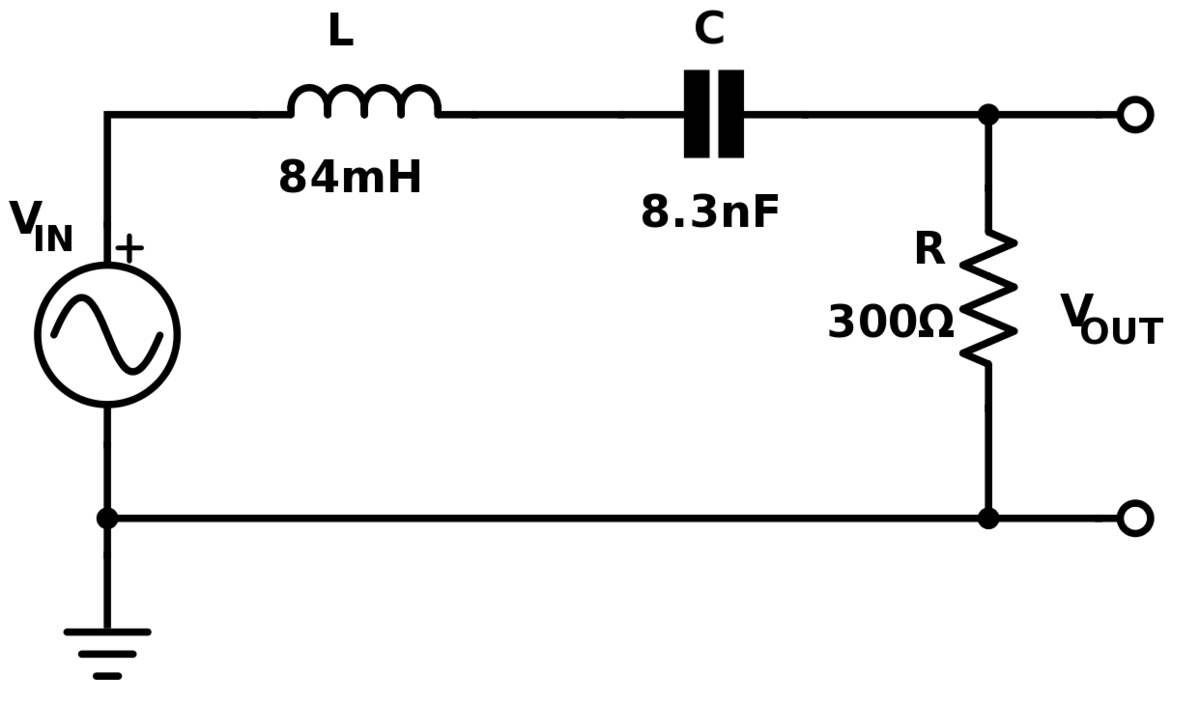 It is a band-pass filter.

There is something I don't get.

Now we also know that the resonance frequency is in the middle of the bandwidth. So we are supposed to have:

I have built a circuit as described in the picture, up to a change in the value of the resistor. My RLC circuit is the same, but with $ R= 1491 \varOmega $.

But for my values:

So I get that the resonance frequency is not centered in the bandwitch. What went wrong here?

I remember learning in Circuit Theory that the resonance frequency of a series RLC circuit is the geometric mean (or geometric middle) of the half-power (cutoff) frequencies: 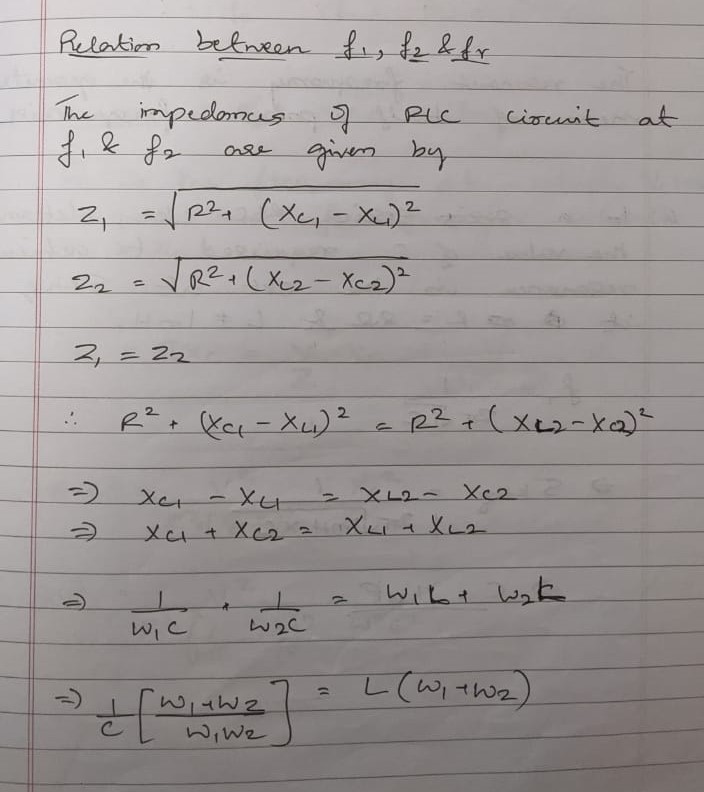 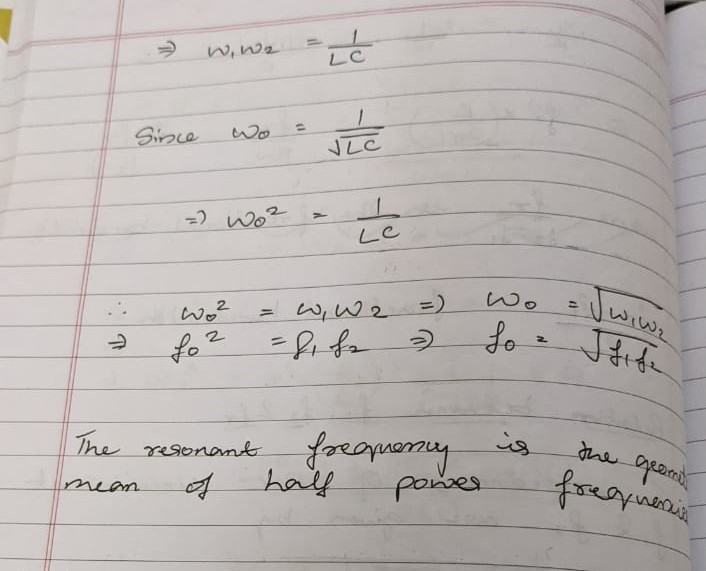 I hope this helps.

The simplest approach here are the fast analytical circuit techniques or FACTs. They are based on the Extra-Element Theorem (EET) forged my Dr. Middlebrook a while ago. I am going to show you how you can derive this transfer function and determine the pole and zero position just by inspection. Have a look a the below picture: 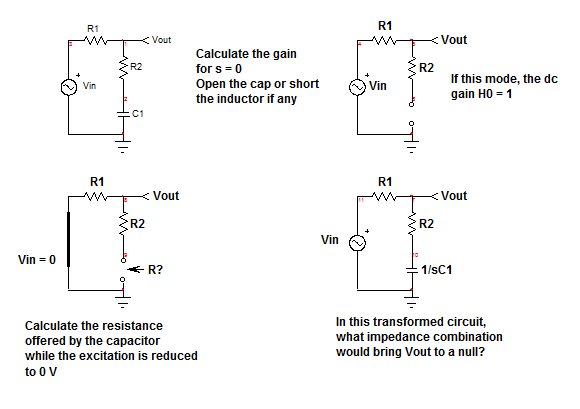 On a simple circuit like this, you start with \$s=0\$. It means in your circuit, you replace the capacitor by an open circuit. As nothing loads \$R_1\$, you have

Then, you need to determine the natural time constant of this circuit. You determine the time constant of any circuit by reducing the stimulus value to 0, 0 V for a voltage source or 0 A for a current source. Here, reducing \$V_{in}\$ to 0 V means replace it by a short circuit. Now, if you disconnect the capacitor \$C_1\$, in your head, connect an ohm-meter at its connecting terminals in the circuit and measure the resistance. You "see" the series combination of \$R_1\$ and \$R_2\$. The time constant of this circuit is thus \$\tau_1=C_1(R_1+R_2)\$. We can show that for a first-order circuit, the pole is the inverse of the natural time constant. In other words:

For the zero, consider the circuit redrawn while \$C_1\$ is replaced by its impedance expression. This is what is called the transformed circuit. A zero in a function \$y=f(x)\$ is the value of \$x\$ which brings \$y=0\$. In a transfer function, the output or \$y\$ is the response, \$V_{out}\$ in the drawing. What specific impedance combination in this transformed circuit observed at \$s=s_z\$, the zero frequency, could make \$V_{out}=0\;V\$? Could \$R_1\$ become an infinite value? No. Could the series combination of \$R_2\$ and \$C_1\$ become a transformed short circuit? Maybe:

and this is your zero frequency. The final transfer function is thus expressed in the so-called low-entropy format

Of course, you can determine the transfer function using the raw approach in which you consider the impedance \$Z_1(s)=R_2+\frac{1}{s_zC_1}\$ loading \$R_1\$ and you have

Develop and rearrange to fit the low-entropy format and you will also find your pole and zero. However:

With the FACTs approach, you draw small sketches and obtain a transfer function by inspection without writing a line of algebra. You can also consider the gain for \$s\$ approaching infinity instead and use inverted poles and zeros as in the below picture: 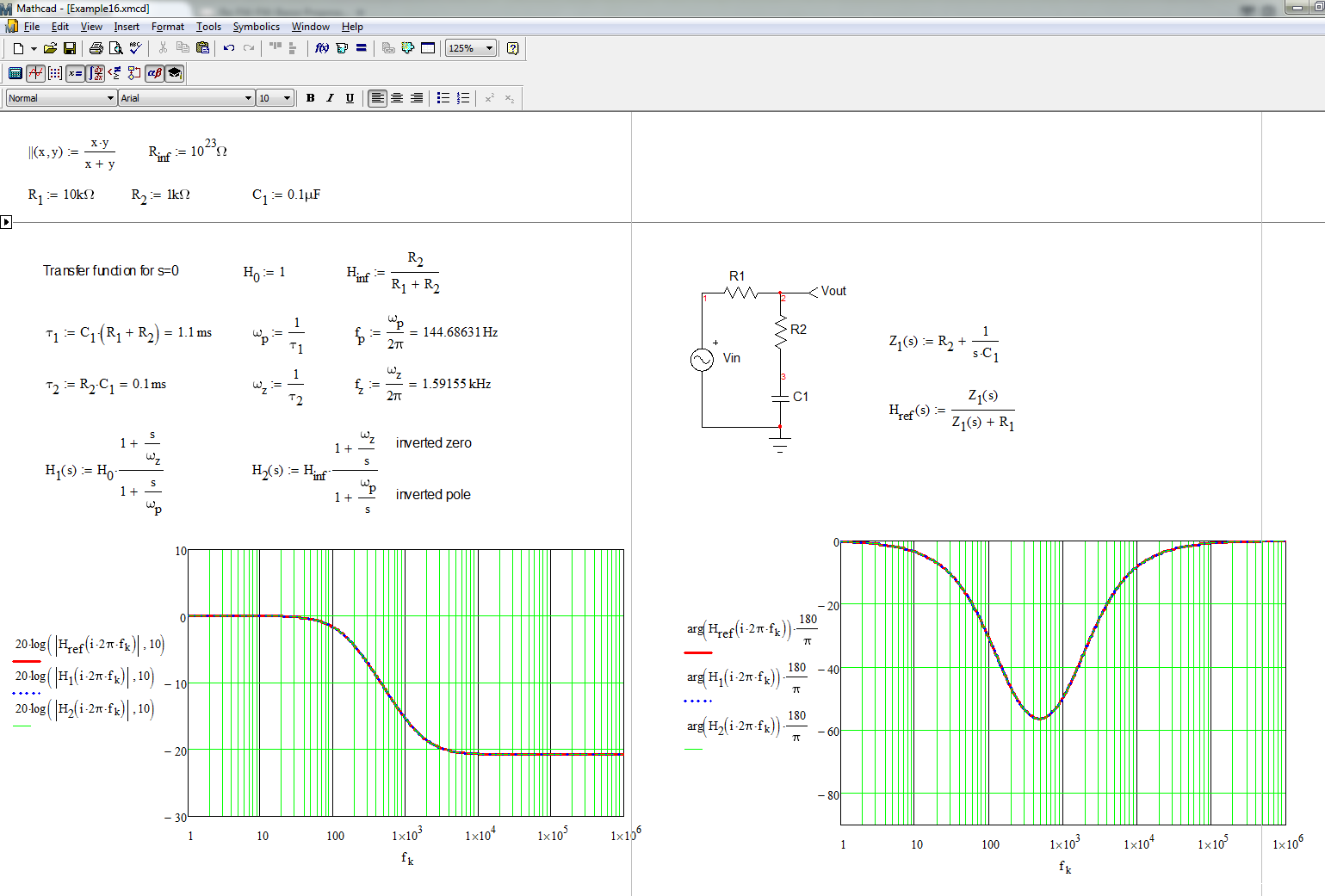 Best of all, the transfer function is already arranged properly. See if you can figure this out yourself: take the same circuit and now load \$V_{out}\$ with a resistor \$R_3\$. If you calculate the new time constant, it becomes

The zero remains unchanged and the new transfer function is

Again, no equations, just in your head with a little bit of habit.

As student, if you are designing circuits (passive or active) and need to determine transfer functions, I encourage you to acquire this skill because once you master the technique, you won't go back to the classical approach. If you start slowly step by step, it is quite simple actually. Complicate expressions when you understand the approach with 1st-order circuits.

You can discover FACTs further here

and also through examples published in the introductory book

No, this does not work this way as pointed out by another fellow in a different post of yours: the first \$RC\$ section is loaded by the Sallen-Key filter input impedance so you can't neglect it. You could if you would buffer the first network before driving the second filter. Another option would be to start on the left by the Sallen-Key structure then feeding the \$RC\$ filter. Considering a 0-\$\Omega\$ output impedance for the op amp then you could cascade (multiply) the transfer functions.

I've shown here without writing a single line of algebra how you can determine this transfer function using fast analytical circuits technique described here. Considering well-separated real poles, the transfer function can be approximated as

and if you plot this expression, you have 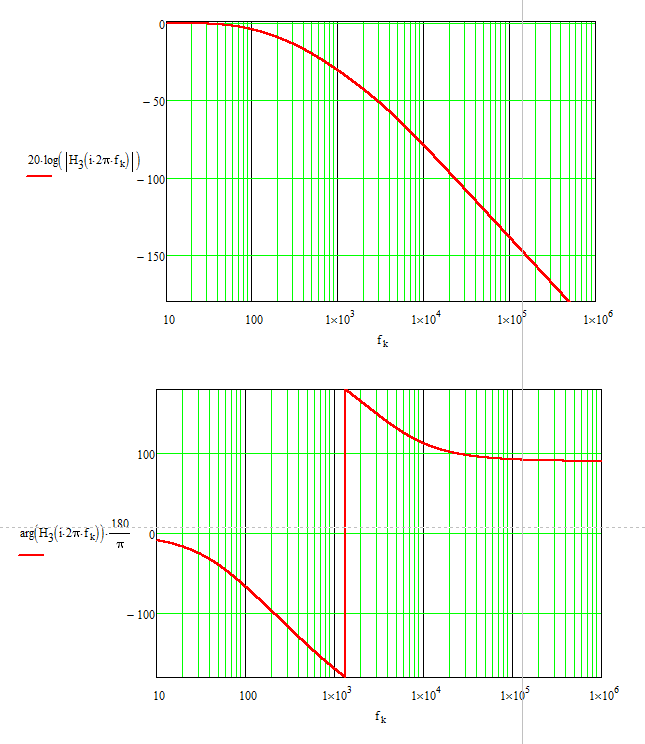 Edit: as correctly underlined by LvW, the above arrangement does not reflect a Bessel transfer function but rather a series of 3 cascaded poles. The transfer function describing this network actually obeys the following expression: \$H(s)=\frac{1}{1+b_1s+b_2s^2+b_3s^3}\$ in which

Assume we would like to tune this filter to 1 kHz, then you have to scale the formula according to:

which is approximately equal to:

I can plot these two expressions and they give identical dynamic responses in magnitude and phase: 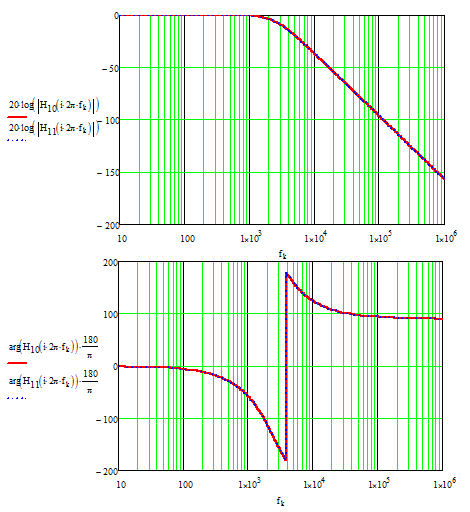 This is a system of 3 equations/3 unknown if you fix \$C_1\$, \$C_2\$ and \$C_3\$ for instance. If you use the tool here, then you have the following component values for a 1-kHz characteristic frequency:

If now plot the expression that I determined here and featuring the above component values versus the response of the 3rd-order Bessel transfer function we have derived, the plots are identical: 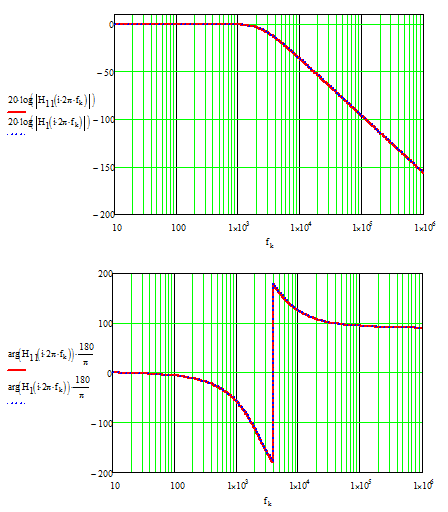