Is it possible that the schematic shown here is wrong? 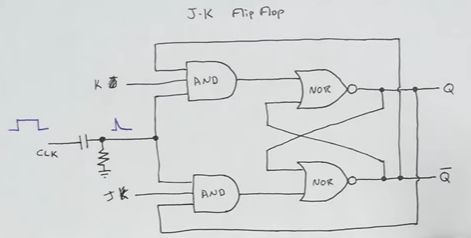 It seems like that he inverted the feedback wires, but I'm quite suspicious because he made the circuit and it works, I'm a bit confused.

EDIT: as said in the comments this is not a flip flop, but a latch, sorry for the error.

Ugh. This again. tl, dr: The gated JK latch is a junk circuit and should not be used in a modern design. It's useless, except as a lesson of how not to design a latch.

Let's start with the The Ben Eater drawing. It's wrong - the feedbacks are crossed. 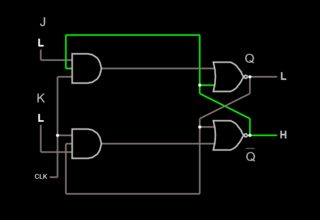 As you can see, this doesn't do anything.

So let's fix the feedback connections... 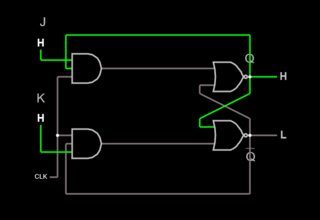 try it here with Falstad. It oscillates

... uh oh, there's a problem. We now have a working (sorta) gated JK latch, and we can see this behavior:

The expected Q/Qbar toggle with J and K high doesn't happen. It oscillates!

Why? When both the J and K inputs are ‘1’ and clock is high, the two NORs and ANDs form a pair of inverters wired head-to-tail. With all the inputs high, you have a ring oscillator, a useful circuit by itself (it's used in PLLs for example), but not here. This oscillation is sometimes called "race-around", and was a (mis-)feature of early JK flop logic designs (yes, including Jack Kilby's).

Instead, we want the state to change only at clock rise. We have two ways to do that:

The first approach is a hack to save gates. While it worked with early logic that was slow, no one in their right mind would do a clocked JK flop that way today.

Nevertheless, in the interest of completeness, here's an example using a rising-edge pulse detector on the clock: 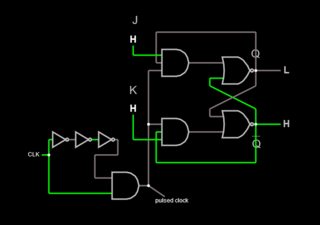 The second, two-stage approach is what's used in real chips, even early TTL devices like the 74xx73. 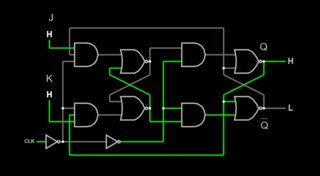 As expected, the flop toggles on clock rise when both J and K are high.

If I understand your question right, a simple centre tapped rectifier like this should do: 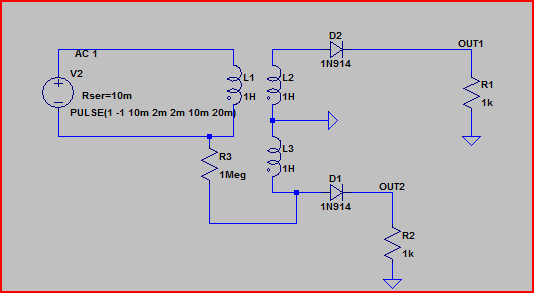 L1 is the primary winding, L2 and L3 are the secondary windings. OUT1 and OUT2 are to your FFs (or whatever you are capturing with) Ignore the 1Meg R3, it's just there to keep SPICE happy.
You can use the correct windings ratio to adjust the levels as desired (may be useful if high voltages are involved), and add e.g. a couple of zeners to protect your inputs. There are also many other ways to do this, depending on exactly what you are trying to do.

Simulation of above circuit (light blue is input pulse waveform, blue is negative pulse output, green is positive pulse output) EDIT - to make it clearer I simulated with a pulse file rather than a square wave as shown in the schematic:

A D flip flop simply latches the value of a wire on it's D pin at the rising edge of a clock. Using three inputs (S, R, and Q (output of the DFF)), you need to create a small combinational circuit which mimics an SR flop:

With these three statements it's simple to create a small truth table and from that to create the combinational circuit which should drive your D pin.