Edit: added the schematic and an oscilloscope screenshot

The issue is that some LEDs would not light up sometimes or partially light up or flicker and this is not connected with particular rows or columns. I've checked the solder joints and I think they are fine.

Also when there's a LED that doesn't light up it starts to work after manually applying current to it using a 9V battery with a resistor and 2 wires and touching the LED with the wires so that it lights up. Touching such LED with a conductor or by hand also sometimes brigs it back to life. But the same LED stops glowing again later.

I've measured the waveform across the LEDs with an oscilloscope and there are short 1us or shorter negative pulses of about -20 V when the switching happens (this must be because of the long wiring of the LED grid itself and the wires connecting it to the driver board).

I've tried soldering a 100nF capacitor accross the leads of a LED that did reduce the negative spikes to 1V but it didn't help to remove this not lighting up effect so I'm not sure if this high negative pulses can be damaging these LEDs permanently or there's some other cause of this.

I also considered that possibly because each column of 16 LEDs has one high side driver the LEDs being connected in parallel can be causing this issue because of the slightly different forward voltages of the LEDs but a) the low side NPN transistors are in the constant current configuration with a resistor between emitter and ground b) a test with turning on one row at a time in turn so that there's only one LED turned on at any moment in time time shows the same problem.

Can these -20V short (1 uS) negative voltage spikes when applied to a LED cause such behavior so that a LED is permanently damaged but not destroyed completely so that it stops glowing intermittently?

Schematic (this shows one common + one row; there are total of 16 commons and 24 rows): 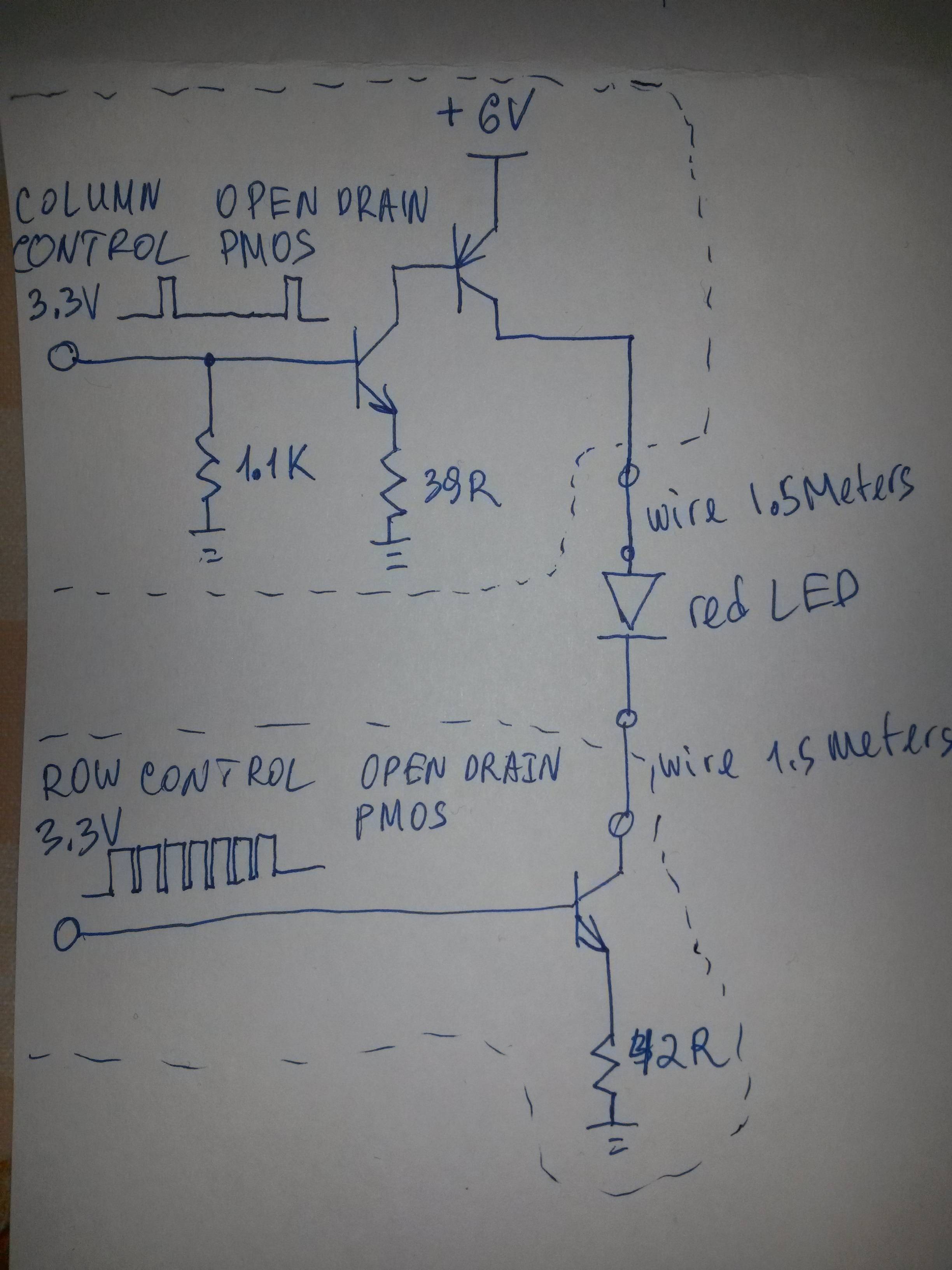 Oscilloscope screenshot (measured across LEDs on the same row; trace #1 (yellow) is a non-working LED, trace #2 is a working LED): The culprit was mechanical damage to the connections from the legs of the LEDs to their diode crystals.

I bent the legs of the LEDs at 90 degrees without without support which caused mechanical damage which manifested itself in these intermittent failures.

Thanks to Ian.M from the EEVblog forum for pinpointing the issue for me!