I have two PCB that I designed and they are made by a PCB manufacturer (so they are identical). They use a MAX485CSA to communicate but suddenly one of them is drawing too much current, on a normal operation the circuit draws around 5mA and now It's drawing 73mA from my bench power supply (I get the reading from the power supply display). I know that the culprit is the 485 transceiver because if I disable the sender pin and enable the receiver (both pins are tied together as you can see in the schematic so this is how it works) the current drops again to normal levels (5mA), I've also noticed: 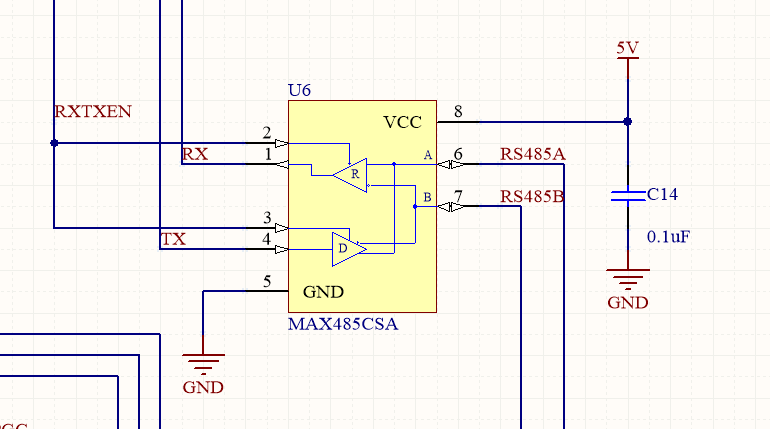 EDIT1:
I'm going to keep common ground as Jeroen suggested but there's still something bothering me. I've been checking the receiver's side controlled by the Arduino and I noticed a transient in the non-inverting channel when the Arduino's USB is plugged-in (being USB the only PS), it stays at 4V for like 3 seconds, then it drops to 288mV. The signal also goes up and down some millivolts as I plug-unplug other USB devices and the monitor. This 4V to 288mV transient is causing current spikes in the sender's end of the same magnitude as I'm experiencing now continuously in the defective circuit ¿someone knows what does this mean?

EDIT2:
The 485 transceiver was damaged after all, It has been replaced and the problem with the excessive current is gone and voltage levels in the output are right this time. I'm also not getting garbage from the powered off circuit,with or without common ground.

Reasons for this to happen remain unkwnon even though there are some potential culprits:

For now I'll be performing tests on the circuit using common ground and see how it performs. I'm also powering the Arduino from the power jack so I won't get those ominous transients each time I plug in the USB cable.

That sound like latch-up. It's what you get when a pin goes outside it's supply rails.

Things that solved the garbage problem under any circumstance: joining the circuit's common ground with the power supply's ground (Earth), joining both sender and receiver GNDs, adding pull-up and pull-down resistors to channels A,B at the receiver's end.

You should already be doing this.
RS-485 is differential signal, but it still requires signal ground to keep the common mode voltage within spec.

I think this is going wrong here.

I'm by no means an expert at RS485, but I have run into some of the same problems you've had with independent power supplies on multi-drop RS485 networks.

Most frequently, in spite of claiming fail-safe operation, they don't play nice with ground loops/DC offsets. For me, in the past, the most direct route is to use fail-safe biasing on the two lines. E.g. 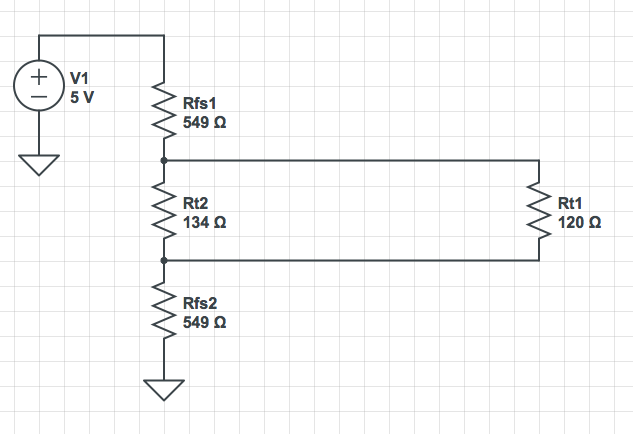 By the way: Most of my learning has come from others here as well as some pretty good application notes from Texas Instruments (PDF), Maxim (HTML), and Analog Devices (PDF).

Hope to hear if this gets you in business.

Coincidentally, I just completed a project using the same rs485. Add a pull-up resistor at DE, and a pull-down resistor at 'RE. This way, you will always be ready to either receive or transmit. (10k pull-up, 220 ohms pull-down) Do this for both ICs. Do not leave either of these pins floating. Good Luck!