While reading a PIC data sheet, I found the parameters Input clamp current / Output Clamp current. Where do I consider these specifications?

It is an ESD circuit triggering limit specification. 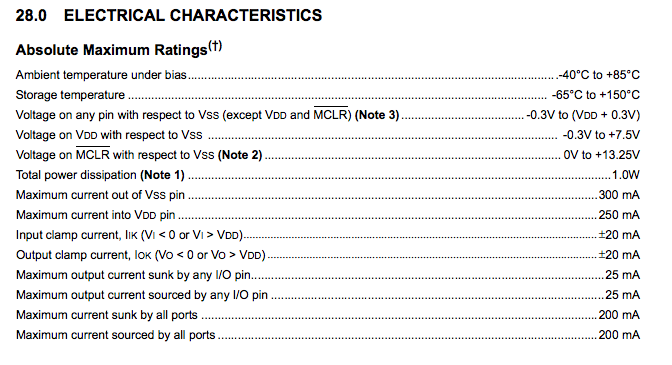 Since these numbers are so low it's clearly not the current during the ESD event. Why would an ESD event be clamped at currents less than the maximum current rating of a driven output? Additionally once an ESD event is underway you're not going to be limiting it to just 20 mA!

Take into account that these are absolute maximum specs and the fact that these "clamp currents" are specified under the conditions that \$V_I<0\$ and \$V_O>V_{DD}\$ the logical conclusion is:

Modern semiconductor pins have the challenge of protecting against ESD at lower voltages. The only real way of doing this is to have all the pins connected to an internal ESD rail via diodes (often in a half bridge configuration and sometimes a full bridge). You can't use a zener or clamping diode circuit as you can't control the breakdown voltage accurately enough for the lower voltages - below 3.3V. The solution is to have active circuitry that monitors the ESD rails and then clamps them together. This also allows an any-pin to any-pin clamping action.

These pins will be designed for currents that are well in excess of 100's of mA but they also have to be low capacitance to prevent undue loading of the drivers.

There is also an alternative explanation that these are the limits at which if exceeded will trigger latch up in the substrate. While possible in older processes this is not likely in modern processes. However, I don't know the process details so for completeness, this should be mentioned.

Electronic – Separate registers for input and output in microcontrollers

The low PICs from 16 on down don't have LAT registers, only the PORT register. You therefore use the same register for input and output. That's no big deal since reading and writing are separate operations.

There is one wrinkle with this that sometimes catches people, and much superstition-based programming has evolved around it. The issue is that the PORT register always reflects the actual pin states. This may sound simple and harmless, but you can get into trouble when the external circuit holds the pin in the opposite state it was written in. Note that enough capacitance on the pin will do this, at least for a little while.

This becomes a problem when you perform a read-modify-write operation on a port register shortly before having changed a output pin. Let's take the really obvious case of ORing 0 into the PORT register. OR is a read-modify-write operation. The OR instruction will read the existing register value, perform the OR, then write the result back to the register. Now imagine the previous instruction wrote a new value to a output pin, but that pin hasn't had time to get to its new state yet. The read part of the OR instruction reads the current PORT register value, which is not the most recent value written to it because the pin hasn't slewed to its new state. The OR with 0 doesn't change anything, so the old state of the PORT register is written back to it, essentially cancelling the previous write.

Now you may say that ORing 0 into a PORT register is silly. In most cases that's true, but that was just to make a obvious example. Consider that the BSF and BCF (bit set and bit clear) instructions actually perform a read-modify-write on the whole port register. Consider the instruction sequence:

Let's assume all port B pins are set to outputs and are all low to start with. After the first instruction RB1 will start going high. Due to capacitive loading, RB1 is still low and PORTB therefore reads 0 when fetched as part of the second instruction. Bit 2 is now set, so the value 4 is written to PORTB. RB1 will now go low again since 0 was written to that bit. RB2 will start going high. The net result of this instruction sequence could be that only RB2 is high, not RB1 and RB2 as probably intended.

The LAT register was introduced to avoid this problem. It holds the last written value, not the actual instantaneous pins state. If this instruction sequence was performed on LATB instead of PORTB, both RB1 and RB2 would be driven high at the end regardless of how slowly they might get there.

So what do you do? On a PIC 18 and higher read from PORT and write to LAT, and there'll be no problems. On the other PICs, avoid any read-modify-write operation on PORT until you know all pin states have settled. Some people will tell you to always use a shadow copy, modify that, then write that to the PORT register. That's just silly voodoo programming, of course. You know your circuit. Most of the time a single NOP between a write and any read-modify-write is all that's needed. If the pin can't get to its new state in at least one whole instruction cycle, then the circuit should most likely be fixed anyway. In rare cases shadow register can be useful, but those are rare cases indeed. Mostly they are just a waste of cycles, RAM, and one more thing to mess up, especially for the kind of people that blindly follow rules like "always use a shadow register". A much simpler answer is that those kind of people should just stick to a PIC 18 or higher.

How the value types are represented in memory depends on the architecture (little/big endian for example) and on the standards it complies to.

Example: The IEEE Standard for Floating-Point Arithmetic (IEEE 754) is a technical standard for floating-point computation established in 1985.

From a micro controller perspective, the easiest way to send this kind of data is just to send it in this native (in memory) representation using pointers or unions.

On the PC/GUI side, you may have additional resources/libraries that help you with byte-sequence to type conversions. However you perform the conversion, you just have to make sure it uses the same rules/standard.

Lets take an 16-bit unsigned integer ´i´ with the assigned value of 1000 for example:

The little endian representation would be

in memory. So when you want send this value as a serial byte stream just cast ´i´ to ´byte´ and send two bytes starting from that address.

Your GUI software could perform the cast in the other direction, given that it uses the same standard for the type representation. If it uses big endian, you may have to interchange byte order first.

btw: What kind of GUI/language are you referring to? For example C#/.NET provides extensive mechanisms for type conversions using the BitConverter class.

EDIT Since the author mentioned that he uses C#, here some additional info:
Note that C# itself doesn't define the endianness. Endianness is decided by hardware. However, most platforms that use .NET are LITTLE endian. If you want to be sure, you can check the endianness of the system with the ´BitConverter.IsLittleEndian´ field to tell you how it will behave.

Assuming that your micro controller uses little endian (like all(?) atmel controllers for example), you could convert the bytes given from the 16-bit unsigned int example above using:

Otherwise, you may have to revert the byte order first.