I know potential is always about difference so you can't just measure a potential but it's difference with some other potential.

I want to amplify small differences between the inputs and measure the difference with the maximum resolution. Is there an easy way to subtract V1 – V2 and supply the result to the ADC?

I think what you are looking for is an op-amp set up as a subtractor: 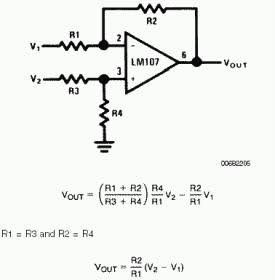 The above is the simplest form of a differential op-amp, however, it is best to use instrumentation amplifier (wikipedia) setup as mentioned in the comments. It is basically the same concept, but with the use of two extra op-amps (that works as buffers) you can prevent the input signals to be interferred by the load, giving you a much more acurate reading.

Here is the instrumentation amplifier setup: 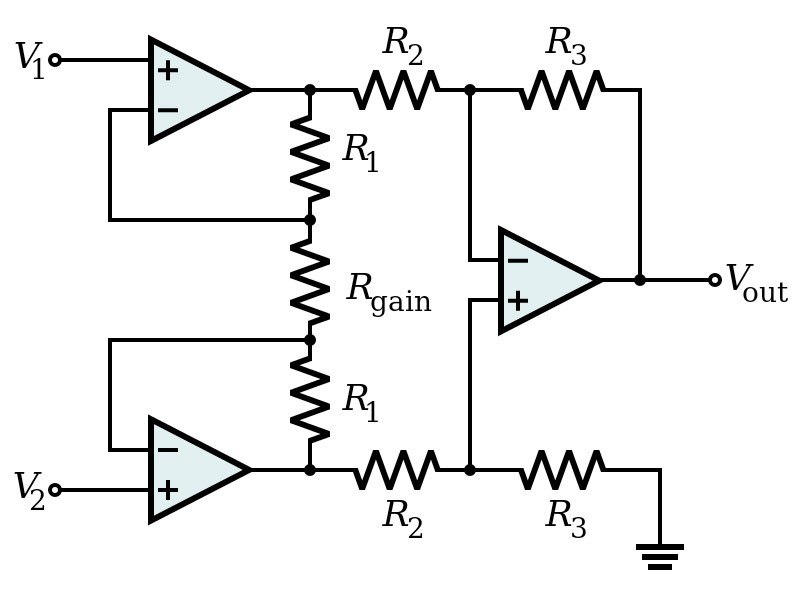 Do a little reading on the link above, it is fascinating how they work.

Electronic – Instrumentation Amplifier – how to use it correctly

Input voltage range issue. With 0 & +5 supplies, the input range is only 1 to 4 volts. Your inputs are below the range where this amp will work. Check "linear input range" on datasheet.

One fix is to get negative voltage on V-. Another is to bias one end of the voltage measurement. Eg, bias the low side to 1.5 V and leave the high side unbiased/high impedance.

Too much gain. The amp is open-loop so its gain will be about 100,000. Any difference between the source voltages, even 1mv, will cause the output to clip (settle as close as it can get to one of the supply rails).

Look for examples how to set the opamp gain to something more reasonable (say 100 or 1000) such as the "non-inverting" amplifier here. With Rf= 100k and Rg=1k, gain would be a reasonable 101. You will also only need one of your noise source inputs.

One warning about excessively high gain from an opamp : bandwidth is reduced (see "open loop bandwidth" and "gain/bandwidth product" aka "unity gain bandwidth") so noise from such an amplifier will not be "white" (spectrally flat). You need to decide the bandwidth you need and set the gain accordingly. For an ADC, bandwidth is usually less than half of the sample rate. For white noise, we probably don't need to be as strict as we would for general signals, but still, a bandwidth of 30kHz is reasonable given your 77kHz limit on sample rate.

For a TL082, unity gain bandwidth is specified as 3 MHz, so that limits our gain to 3MHz/30kHz = 100 for a single amplifier stage. You can choose a faster opamp, or add a second amplifier stage for higher gain. (However, it can be difficult to stop a high gain, high bandwidth amplifier from oscillating)

You may want to control the DC gain separately from the AC gain, and set the DC gain to a lower value such as 1. This is easily done with a capacitor (say 10 to 100 uf) in series with Rg. Then you can increase Rf to increase gain without the output clipping from DC imbalance (but at the cost of reduced bandwidth).

EDIT: Simple capacitor coupling would reduce the DC gain to 0. This approach has a DC gain of one, easily increased with a resistor across the capacitor, to some intermediate value. Either approach works.

You can employ higher order filters to improve the response around your chosen cutoff point; at the moment I think it adds complexity. Or you could set the cutoff to 0.1 Hz, but I think you would have to wait about a minute before it settled after power up!