I'm trying to design a circuit that allows a micro controller (arduino) to control a voltage to a load. The load voltage needs to be bipolar in nature (+- 3 to 5 V) for use in controlling a TEC.

My current design idea is to take the output of the micro controller as PWM and lowpass filter it to obtain a voltage between 0 and 3.3 V. From there, I plan to level shift it to +- 3 V via input to a BJT as shown below: 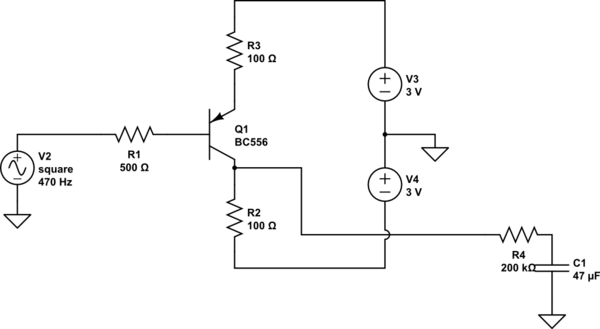 When this portion of the circuit is tested alone, it appears to deliver the correct characteristics (50% PWM duty cycle gives 0 V, the average of many switches between + and – 3 V, varying the duty cycle increases/decreases this voltage up to the supply rail voltages in a proportional manner).

From there, the input is fed into a simple push-pull amplifier topology feeding off the same bipolar supply as the level shifter, to drive the load (load current in the region of 1 Ampere desired).

When the level shifter and low pass filter is connected to the push-pull amplifier, it becomes loaded and does not give the desired proportional voltage control I am after. I've tried moving the lowpass section to before and after the level shifting transistor, but in that configuration I have difficulty driving enough current through the base of the transistor to get it to switch (current amplifier needed?).

How would I best go about resolving these issues with the given (rough) topology? I've considered using an op-amp as a buffer for the low-pass stage, but I've only access to 741s which won't do for the +- 3 V power supply (Maybe I could increase the supply voltage – the driven load is a TEC device).

Any input or suggestions on overcoming this problem would be much appreciated, thank you.

I have access to only a single bipolar bench power supply and BJTs (no FETs, unfortunately) (along with some LM741 op-amps, and a selection of resistors, capacitors and inductors, but nothing fancy or integrated (might be able to squeeze some 7400 series logic AND gates for doing cheap level shifting if required).

Please note, the component values used in these schematics are for rough description only.

I've implemented Spehro's buffer suggestion, and it appears to be working as desired. Can anyone make any suggestions as to how I could further improve this circuit? (Q1 current seems a little high, ~100 mA, but only 75 Ohm on the collector seems to bias the RC lowpass output to around 0 V at 50% PWM duty)

The circuit is drawn up in LTSpice for simulation here.

Below is the circuit drawn up in CircuitLab, if that's easier to see.

Update: I've added some biasing resistors to the emitter-follower section and tweaked stuff a bit in LTSpice in order to get the system as linear as possible from the PWM input to output. I'm not quite sure if what I'm doing is correct, but it seems to be better than what I've been doing before.

LTSpice circuit linked before has been updated to match if that's easier to simulate.

You can try buffering the output of the filter with a pair of darlington emitter-followers, which will replace the four diodes with four transistors. 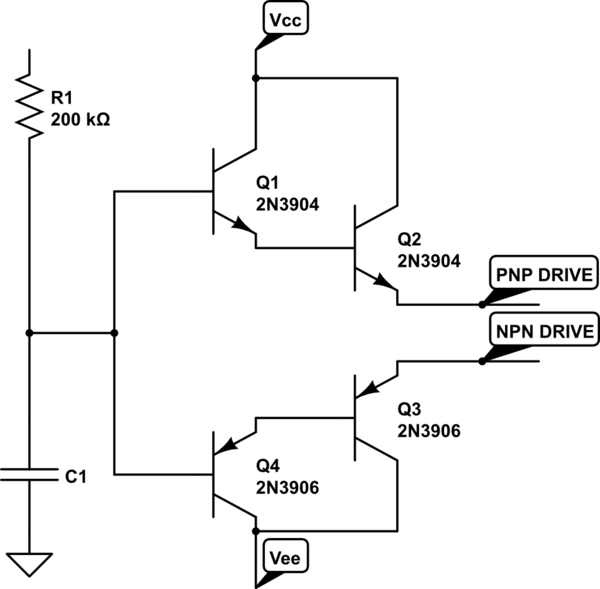 You can try buffering the output of the filter with a pair of darlington emitter-followers, which will replace the four diodes with four transistors.

Check that the no-load bias current in the output transistors is not too high.

It might be easier to use an op-amp though, if you can get some that are suitable.