Why the drain the source terminal of the MOSFET function differently while their physical structure is similar/symmetrical ?

This is a MOSFET: 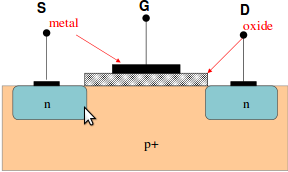 You can see that the drain and source are similar.
So why do I need to connect one of them to VCC and the other to GND ?

Myth: manufactures conspire to put internal diodes in discrete components so only IC designers can do neat things with 4-terminal MOSFETs.

Any P-N junction is a diode (among other ways to make diodes). A MOSFET has two of them, right here: 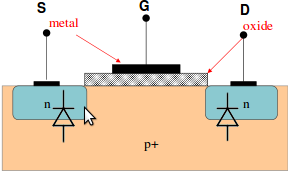 That big chunk of P-doped silicon is the body or the substrate. Considering these diodes, one can see it's pretty important that the body is always at a lower voltage than the source or the drain. Otherwise, you forward-bias the diodes, and that's probably not what you wanted.

But wait, it gets worse! A BJT is a three layer sandwich of NPN materials, right? A MOSFET also contains a BJT: 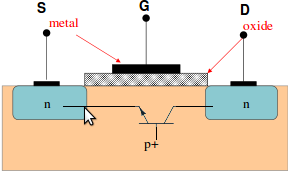 If the drain current is high, then the voltage across the channel between the source and the drain can also be high, because \$R_{DS(on)}\$ is non-zero. If it's high enough to forward-bias the body-source diode, you don't have a MOSFET anymore: you have a BJT. That's also not what you wanted.

In CMOS devices, it gets even worse. In CMOS, you have PNPN structures, which make a parasitic thyristor. This is what causes latchup.

Solution: short the body to the source. This shorts the base-emitter of the parasitic BJT, holding it firmly off. Ideally you don't do this through external leads, because then the "short" would also have high parasitic inductance and resistance, making the "holding off" of the parasitic BJT not so strong. Instead, you short them right at the die.

This is why MOSFETs aren't symmetrical. It may be that some designs otherwise are symmetrical, but to make a MOSFET that behaves reliably like a MOSFET, you have to short one of those N regions to the body. To whichever one you do that, it's now the source, and the diode you didn't short out is the "body diode".

This isn't anything specific to discrete transistors, really. If you do have a 4-terminal MOSFET, then you need to make sure that the body is always at the lowest voltage (or highest, for P-channel devices). In ICs, the body is the substrate for the whole IC, and it's usually connected to ground. If the body is at a lower voltage than the source, then you must consider body effect. If you take a look at a CMOS circuit where there's a source not connected to ground (like the NAND gate below), it doesn't really matter, because if B is high, then the lower-most transistor is on, and the one above it actually does have its source connected to ground. Or, B is low, and the output is high, and there isn't any current in the lower two transistors.

Electronic – Why is a MOSFET triggered by Vgs and not Vgd

Because the Figure 1 you posted refers to a 4-terminal device, not a 3-terminal one. If you look at the schematic symbol in Figure 1, you'll note that the body terminal is a separate terminal not connected to the source terminal. MOSFETs for sale are almost always 3-terminal devices where source and body are connected together.

If memory serves me right (not 100% sure -- seems to be corroborated by this handout), in a 4-terminal device there is no difference between source and drain, and it is the gate-body voltage that determines the on-state of the channel -- with the caveat that the body is supposed to be the most negative voltage in the circuit for an N-channel device, or most positive voltage in the circuit for a P-channel device.

(edit: found a reference for MOSFET device physics. The source-drain behavior is still symmetric, but depends on both gate-source and gate-drain voltages. In N-channel, if both are negative, the channel is nonconducting. If one is greater than the threshold voltage, then you get saturation behavior (constant-current). If both are greater than the threshold voltage, you get triode behavior (constant-resistance). The body/bulk/substrate still needs to be the most negative voltage in the circuit, so to get the reversed behavior in a circuit, body + drain would need to be tied together.

In a P-channel device, this polarity is reversed.)

Look carefully at the conventional schematic symbols for N- and P-channel MOSFETs (from Wikipedia):

and the Wikipedia figure on MOSFET functioning, and you'll see the body-source connection.

A MOSFET always consumes power from the circuit. It has no mechanism to convert energy from some other form to electrical energy.

Therefore, the currents through a MOSFET always flow from a higher potential to a lower one.

Now, Lets say I have connected Drain to higher than Source and current is flowing through the body diode, But at the same time I want to turn on the MOSFET Source to Drain channel to allow current to flow from the channel from source to drain parallel with body diode.

If you turn on the FET, you may get parallel conduction through the channel and body diode, but both currents will flow from drain to source, because the drain is at a higher potential.