I've created a logic circuit that implements the regular gates and its NAND equivalent:

I also have the diagrams on how a NAND gate is used to create difference gates, but still not quite sure how to convert it to an equation. I'm trying to create an equation I can implement in Vivado (if anyone has experience with that). Is there a Boolean symbol for NAND?

Any help and direction would be greatly appreciated. Thank you all so much.

You can convert a Boolean equation to NAND form by replacing each gate with it's NAND equivalent, but as you have seen some gates become redundant. Hence the algebraic method is preferred as it is shorter.

Taking the double complement as we know, does not modify the equation, because \$\overline{\bar{A}} = A \$.

To convert to NAND form, the method for small problems which can be solved manually:

For your question, it takes 2 steps as it is already in the minimum sum-of-products form:

You can build the mux with 4 NOR gates, too. It doesn't require extra inverters on the inputs and outputs, if that's what you were doing. Note that the sense of the "select" input is inverted, so you need to swap the "A" and "B" inputs to compensate.

Electronic – NAND gate that outputs 0 when all inputs are 0

For the general case of this type of problem, read about Boolean algebra and specifically conjunctive normal form (or its dual 'sum-of-products'). That said, this one is simple enough to do by inspection. Here's one implementation: 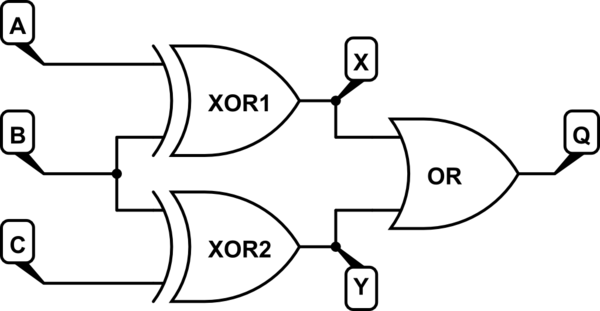 From the truth table you gave, we're looking for an output that is 0 only when A=B=C.

XOR1 compares A and B for equality, XOR2 compares B and C for equality; each of their outputs is 0 when their inputs are equal.