I have a 110W solar panel that I use to charge some LiFePO4 battery packs. The panel delivers 18-20V, so I have a DC buck converter between the panels and the batteries to bring the voltage down to 14.8V. To avoid having the batteries feed the buck converter when there is no feed from the solar panel, I put some diodes on the output side of the converter.

Initially I had two MUR460 diodes in parallel, but they got so hot that plastic case for the terminal block they were connected to melted.

According to the data sheet for the MUR460 diodes, they should be able to withstand a 4A average constant current, so two diodes was within the limits for the ~7A that a 110W panel should be able to deliver when the voltage is bucked down to 14.8V.

Due to the heat issue I replaced the two parallel diodes with three parallel, expecting that heat should no longer be an issue.

Those three parallel diodes still get very hot, not enough to melt the terminal block insulation, but still too hot to touch.

I will of course replace them with other diodes with a higher current rating, but I'm still curious: what am I missing here?

Are these diodes perhaps off-spec/bad, or is there something else that would explain why they get extremely hot? Did I just pick* the wrong kind of diodes, these are meant for high frequency switching, so are they perhaps not good for a constant forward DC current?

I would have thought that 3x diodes rated for 4A each should easily be able to carry a 6-7A forward current without producing a lot of heat.

Update: based on the advice in the answers and comments, I changed to a MBR3045CT schottky diode in TO220 packaging, and attached that to a heat sink. No more heat problems… 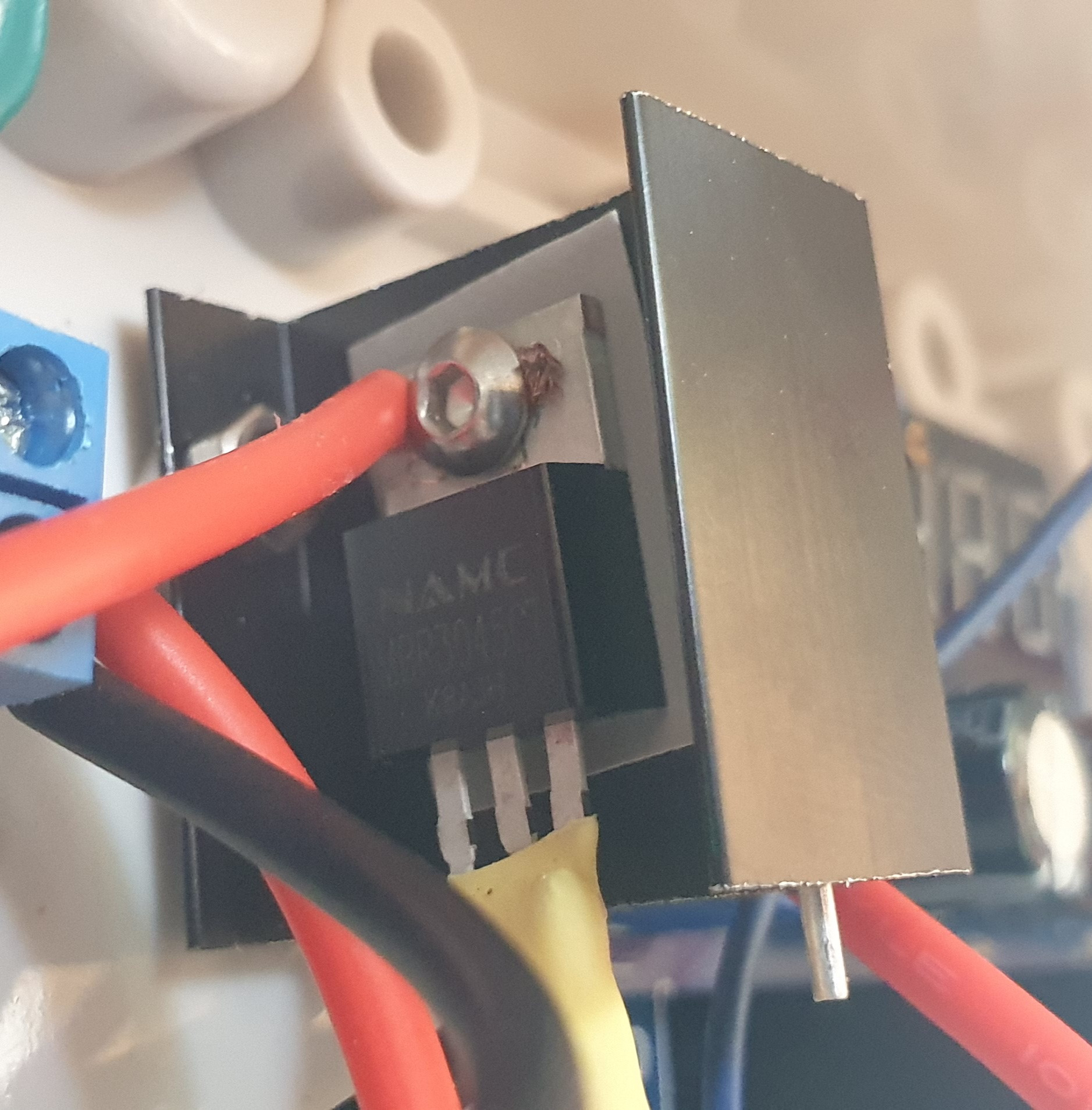 First of all, paralleling diode doesn't work very well. Unless the Vf are matched current will prefer one of the two. It sort of work, but not expect a 50% load sharing.

Fast diodes will work perfectly in DC, simply they are not optimized. Maybe they only have slightly more Vf (and are more expensive). Remember that dissipation in diodes is Vf times I. Schottky diodes also have substantial leakage which often predominates when you use them as switching diodes, but this is not the case.

110W at 18V (assuming the worst case) is slightly more than 6A; a cautious derating would choose an 8A silicon or Schottky rectifier for this application: this is a power oring condition (and I would strongly recommend a MOSFET and an oring controller for this amount of current) so let do some math on some plausible diode.

Now for the silicon choice: MUR820, the obvious stepup from your choice: the TO220 offers a 75°C/W free air dissipation, Vf at about 0.85V (at cold). It would dissipate 5.1W so there's no chance it would survive without heatsink (like most TO220 at their intended power).

In an oring controller situation, the main power loss would be the RDSon of the switching MOSFET. I'd take as a comparison a TO220 too but this would be in practice done with a DPAK if not with a smaller SOT package. But I'm lazy and I don't want to keep half a day choosing a MOSFET. Take the IRFZ24, I have a bag of these. Survives with 175°C at the junction. Nominal 70milliohm, about 2.5W of dissipation at 6A. Still not completely safe without heat sinking and in fact slightly worse than a Schottky. Well, it actually cost less than that diode, and it's not even a low gate drive MOSFET.

However these day steady state optimized MOSFET can go down to about 1 milliohm, so you'd be dissipating only a quarter of Watt.

Putting the two dissimilar panes in parallel is not a good idea. Mostly, the higher voltage panel will deliver most of the current and the low voltage panel does little.

If the two panels have similar current ratings but different voltage rating, you can put them in series to get the sum of the voltages at the single current rating. Then use a switching power supply to buck the higher voltage down to what you want. For maximum voltages under 30 V, it's actually not hard to make your own buck converter. There are many off the shelf chips that you only need to add a inductor, diode, and a few other parts too. You can even make your own with a microcontroller if you want to learn more about buck converters.

A diode will do very little harm - but probably not much good either. I'd put the diode in the fan side so that you get max possible power to the TEC.

5 Watts is unlikely to give much cooling at all. Maximum possible attention to insulation is needed. You can get more cooling initially with evaporative cooling and using this as well as the Peltier would help.

Because the source is driving two things, are there any special considerations I need to think about such as a diode on the TEC so that when it loses power it doesn't dump heat back into the cooler by powering the fan? Or do I want it do run the fan after it loses power to remove heat from the hot side to reduce the differential faster?

I read that to mean that with all external power removed the TEC will act as a TEG using the cool to external temperature differential.

A standard consumer grade Peltier does not make a good TEG (Thermoelectric generator) and even a purpose built TEG is not vastly better. The thermal differential is small compared to what you need to run the TEG on to get useful power. I'd be surprised (it happens) if you could run any sensible sized fan on the delta temperature between cold box and ambient. However, a TEG shunts most of its energy input to the cold side by conduction, which is the main reason for their poor efficiencies. (Much research is being directed at reducing electrical resistance and increasing thermal conductivity.)

The following is probably true but needs some thought:
A hot heatsink will allow heat to flow to the interior via a turned off TEC much better than the TEC can remove heat energy when operating. As the heatsink has been heated by both TEC thermal transfer AND electrical wasted energy you may be worse off if you run this for a while and then turn it off with a hot heatsink. So, if PV output starts to fall (eg end of day) you may be advised to divert energy to the fan to get the heatsink temperature down before power fails fully.