I don't understand why these two circuits don't behave more like each other. 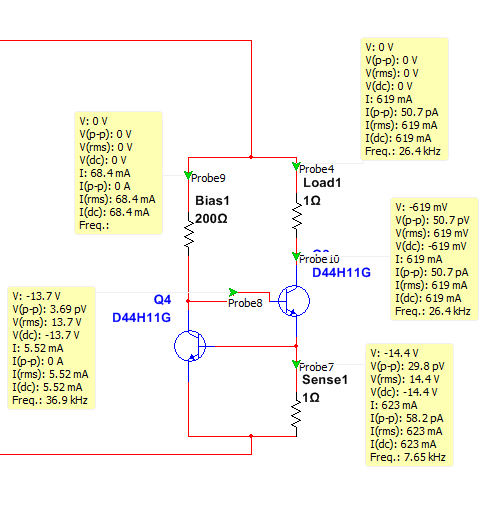 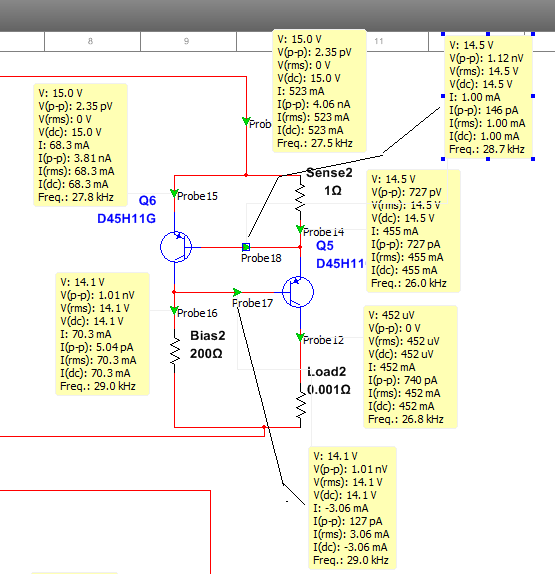 The NPN has ground on top and -15 at the bottom.

The npn limits at around 600mA which is what we expect ,but I'm not sure why the PNP is 450mA.

Any comments are much appreciated.

Looking at the datasheet, we can get the current gain for both PNP and NPN:

It seems that the NPN variant gives sightly higher current gain than the PNP variant. There are more parameters that differ, probably the VBE, etc. which is a reason why both configurations won't give same results.

The circuit shown does not have the transistors doing anything useful, or even turning on at all.

When the push-button is pressed, a circuit is completed via the connection between base and emitter, straight to the resistor. This turns on the LED. Relase the button, that circuit is broken, LED goes off.

The base-emitter junction does not see any voltage to become forward biased and turn on. You can take out the transistors and it'll work the same.

Let's return to the basics: 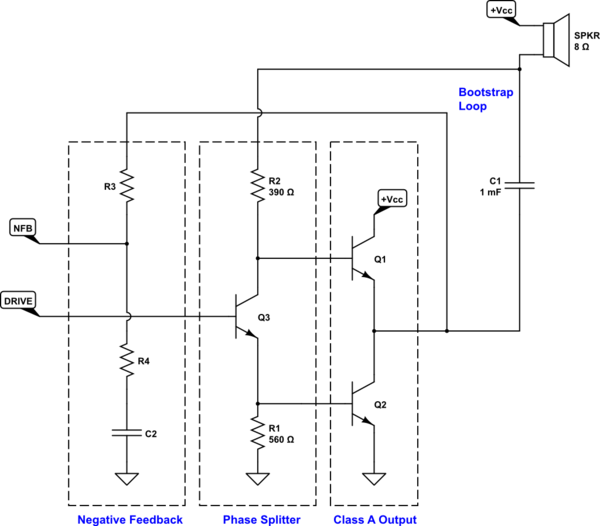 \$R_2\$ is turned into a current source by the bootstrap loop. (The reason why I'm calling it a loop will be apparent soon enough.) We can assume that the \$V_\text{BE}\$ of \$Q_1\$ is approximately fixed (like a battery) throughout the operation of the amplifier. We can also assume that the voltage across \$C_1\$ is similarly approximately fixed (again, like a battery.)

A final note about this type of bootstrapping. It's really nice because it is a very simple method to create a constant current supply by just re-arranging parts you'd be using anyway. However, the constant current through \$R_2\$ comes through the speaker. So it creates a DC-biasing current in the speaker. We might wish it could be otherwise, but it's a price to pay for this arrangement.

However, and this is important, the voltage across \$R_1\$ is not exactly constant. The variation will be just what's required to move \$Q_2\$ through its designed collector current variation. (As you read forward, you may also keep in mind now why it was important, as noted above, to limit this variation.)

So that's the drive for \$Q_3\$. The entire output section and splitter combined must be driven by a voltage signal that cannot vary by more than \$100\:\text{mVpp}\$. We also know that the center of this voltage must be approximately two \$V_\text{BE}\$'s, right? This means \$1.4\:\text{V}\$ or thereabouts.

This part is relatively trivial. It's just a basic AC divider that, at DC, simply passes the output back with a gain of 1. But at AC passes back only a divided portion of the output.

It's a voltage signal. As it is, we should expect a gain of about \$\lvert A_v\rvert \approx 15\$. But more on that later. (I actually set the gain to 15 first, and then worked out the resistor values later, as you'll see below.)

So. We have some NFB ready to go and a need for a DRIVE signal.

Now we can consider the new circuit. 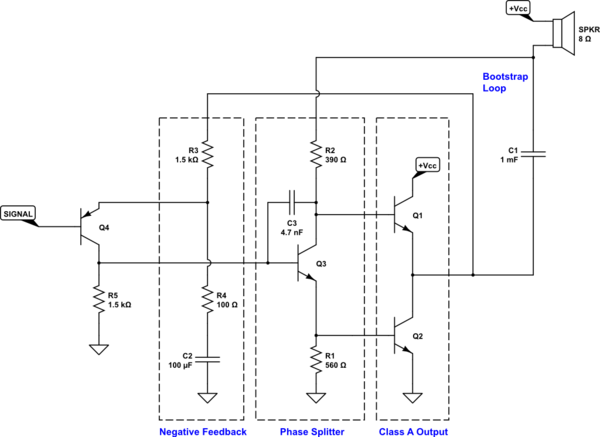 The amplifier output is already assumed to be capable of \$600\:\text{mA}\$ drive. So it will be perfectly able drive the emitter of the added PNP, \$Q_4\$. The much weaker input signal can't really drive that much (by assumption), so we feed that to the base of \$Q_4\$.

You might have chosen a different \$V_{\text{CE}_\text{Q}}\$ for \$Q_4\$ than I did. Perhaps set it a little higher yet. Or lower. And that would also work. But that's the figure I picked. I was just rushing through a design as quickly as my fingers could type (brain was moving faster) and I didn't want to waste any time trading off secondary considerations (there are a few.)

That's really all there was. The only thing left was to figure out the quiescent base voltage for \$Q_4\$ (trivial) and work out a divider arrangement for it.

(All this suggests that the input should be kept less than about \$250\:\text{mVp}\$ rather than the originally mentioned \$300\:\text{mVp}\$, and perhaps just a little less.)

A remaining question to consider will turn out to be a minor detail. Because of the proximity of the magnitude of \$r_e\$ vs \$R_4\$, the above-mentioned open loop gain is temperature-dependent. \$Q_4\$ isn't likely to be self-heated that much, but ambient variations can be wide. Over the range of \$-20\:^\circ\text{C}\$ to \$+40\:^\circ\text{C}\$, \$22\:\Omega\le r_e\le 27\:\Omega\$. Anyone familiar with the power of NFB will immediately realize this won't matter that much (the open loop gain may be from 1115 to about 1165 here) in the end. The closed loop gain will still be rock solid. Try out the calculations yourself and see.

I updated the final schematic above. I'd completely forgotten about the need to force a high frequency roll-off. I've added \$C_3\$ with a nominal value that is reasonably placed, I think. The Ohmic resistances in \$Q_1\$ and \$Q_2\$ should also be put under management and current limiting would be useful, too. But that compensation pole is a must. So it's added now.