Closed. This question needs details or clarity. It is not currently accepting answers.

Want to improve this question? Add details and clarify the problem by editing this post.

I can't understand some stuff about op-amps. Here is my list of doubts:

If an op-amp amplify the difference between the V+ and the V-, how can it work if for the principle of virtual ground V+ = V-, and so if V+ = V- there aren't difference to amplify.

You are right, in real life, the op-amp alone (without any feedback loop) is nothing more than a differential amplifier. The output voltage is the difference between the \$+\$ and \$-\$ inputs multiplied by the open-loop gain (Aol): 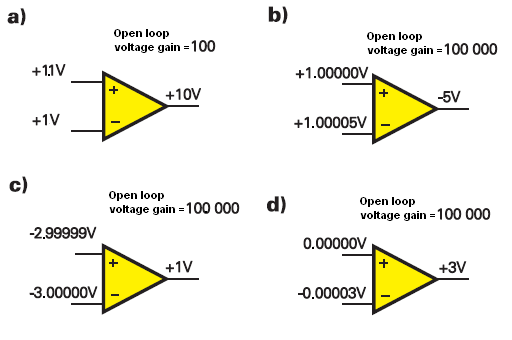 Also, you must remember that the op-amp open loop gain is very large; therefore very small change between the input voltage will cause a large change at the output (Fig. b, c, and d).

The voltage difference at the input must be equal to:

As you can see this difference is indeed very small. Hence, we can say without much of an error that \$V_+ \approx V_−\$ when op-amp is working in a linear region (negative feedback applied around the op-amp) and when the open loop gain is very high.

Additionally in circuit theory we analyze the circuit assuming that we have an ideal opamp. And one of the properties of an ideal op-amp is that it has infinity large open loop gain. Try to think about it for a while. And I hope that now you see why \$V_+ = V_−\$ is true for the ideal op-amp case (infinite open-loop gain).

Back to the basic 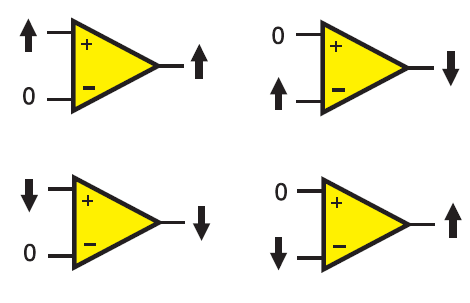 Now try to analyze this circuit: 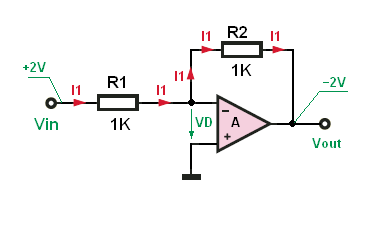 In this circuit has negative feedback applied by the R2 resistor.

Now let us understand how the negative feedback returned through R2 affects the amplifier operation. To begin our discussion, let us momentarily freeze the input signal as it passes through 0 volts. At this instant, the op amp has no input voltage (i.e., VD = 0 = voltage between the (+) and (-) input terminals (VD)). It is this differential input voltage that is amplified by the gain of the op amp to become the output voltage. In this case, the output voltage will be 0. Now suppose the output voltage tried to drift in a positive direction. Can you see that this positive change would be felt through R2 and would cause the inverting pin (-) of the op amp to become slightly positive Since essentially no current flows in or out of the op amp input and the (+) input of the op amp is at ground potential. This causes VD to be greater than 0 with the (-) terminal being the most positive. When VD is amplified by the op amp it appears in the output as a negative voltage (inverting amplifier action). This forces the output, which had initially tried to drift in a positive direction, to return to its 0 state. A similar, but opposite, action would occur if the output tried to drift in the negative direction. Thus, as long as the input is held at 0 volts, the output is forced to stay at 0 volts.

Now suppose we allow the input signal to rise to at +2 volt instantaneous level and freeze it for purposes of the following discussion. With +2 volts applied to R1 and 0V at the output of the op amp, the voltage divider made up of R2 and R1 will have two volts across it. Since the (-) terminal of the op amp does not draw any significant current, the voltage divider is essentially unloaded. We can see, even without calculating values, that the (-) input will now be positive. Its value will be somewhat less than 2 volts because of the voltage divider action, but it will definitely be positive. The op amp will now amplify this voltage (VD) to produce a negative-going output. As the output starts increasing in the negative direction, the voltage divider now has a positive voltage (+2 volts) on one end and a negative voltage (increasing output) on the other end. Therefore the (-) input may still be positive, but it will be decreasing as the output gets more negative. If the output goes sufficiently negative, then the (-) pin (VD) will become negative. If, however, this pin ever becomes negative then the voltage would be amplified and appear at the output as a positive going signal. So, you see, for a given instantaneous voltage at the input, the output will quickly ramp up or down until the output voltage is large enough to cause VD to return to its near-0 state. All of this action happens nearly instantaneously so that the output appears to be immediately affected by changes at the input.

And the situation in the circuit when the open loop gain has a finite value. 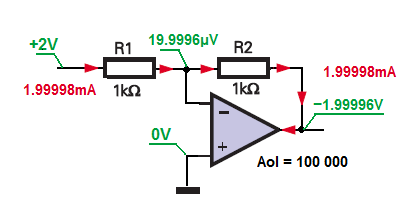 Electronic – How to know when an amp has virtual ground

There is no contradiction ! Ground is simply a reference point. The Cmoy amp needs +9 V and -9 V, the point "in the middle" is used as a reference and in this case also called ground. You could also choose the -9 V point to be ground and then the other points would be +9 V and + 18 V. But with the Cmoy amp you want to connect it to an audio source. The schematic shows how you need to connect the input signal of the Cmoy amp, the ground of the input signal (coming from the audio source) needs to be connected to the point between the two 9V batteries.

Virtual ground is a term used when an opamp is used in a feedback configuration with one input connected to ground and the other input is then a virtual ground since the opamp keeps it at the same voltage as ground but there is no physical connection to ground !

In the case of the Cmoy opamp there is no virtual ground ! I advise you not to worry too much about ground or virtual ground. It is not a big deal if you just want to build some design.

Just remember that ground is simply a reference point, nothing more than that. And virtual ground is when an opamp has feedback and one input is connected to ground, then the other input is called a virtual ground.