Now I have this, however, I have discovered that the PS/2 keyboard interface uses open collector signals, so that they can be driven from either end, and apparently using a 74LVC245 with these is complicated. This is the first time I've met such a thing; I'm mostly a software guy.

I'm not interested in sending commands TO the keyboard, only in receiving commands FROM the keyboard, so I never need to drive the data and clock lines from the microcontroller end. Is it sufficient simply to tie the keyboard signals to Vcc via a (large) pullup resistor, so that they stay high when the keyboard's not driving them (this is required by the protocol; if they're not high, the keyboard won't send). But this means that when the keyboard tries to bring the lines low, it's driving against the resistor, and I don't know what the implications of this are. And I don't know whether the 74LVC245 itself has its own pullup/pulldown resistors in the inputs.

Is this a good idea? If not, why, and is there any way I can make this work without having to build a proper driver circuit with resistors?

The 74LVC245 datasheet is here, for reference: http://www.adafruit.com/datasheets/sn74lvc245a.pdf

This is just an $0.02 thought, and not necessarily an answer.

Level shifting of a bi-direction open-collector signal sometimes is done in I2C bus. There are specialized level shifter ICs for I2C, such as PCA9306, which you could try to adopt for PS/2. There's another method, where level shifting is done with a MOSFET connected like this 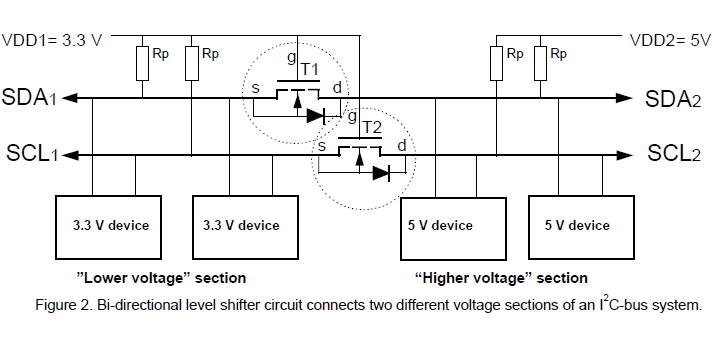 Electronic – Trying to figure out available resources on MSP430 LaunchPad

One reason why the Launchpad is so cheap is because the chip it uses is a very low-end device, which is missing many useful peripherals such as a UART. You will find things much easier if you use one of the other, more capable, devices You will need a FET, of course, but they aren't all that expensive, and it is a very useful tool.

Pins 16 and 17 on the target device are used for debugging. It might be possible to use them in your application if they are isolated with resistors, Microchip recommends that solution for debugging their devices when the ICSP pins are in use.

Most people build software like that starting from a simple application using one peripheral, and then add the additional functionality to the same program. Combining programs can cause problems.

A useful resource for MSP430 development is this Yahoo MSP430 group.

"Output current" should be read as "current into the output pin". As such, negative values indicate that the pin is sourcing current, and positive values mean that it is sinking current.

The floating issue can be remedied by using a device with bus hold such as the SN74LVCH245A. The bus hold feature holds the input pin at the previous detected logic level, and since the inputs and outputs are connected internally in the '245(A), this will hold the output as well regardless of the state of nOE and DIR.