I have been searching EESE and Google for several weeks now for a solution to this problem, and while I found some proposals that seemed promising, the real-world implementation fell short of expectations.

I have a voltage regulator on a board with 10uF input capacitance, to help protect against brownout conditions. I have a fuse in series with the power supply sized to 125mA for various reasons, and just to be clear, I have not found any slow-blow versions that meet my requirements. The power supply can be anything from 5 volts to 15 volts DC, most likely a lead-acid battery. When the battery is first connected I see an inrush current with a peak of approximately 8 amps over 8us, which very quickly blows the 125mA fuse. Okay, so I need to limit the inrush current. No big deal, right?

I tried a number of different options, but this is the one that seemed most promising: 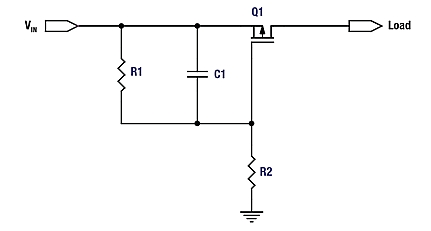 R1 and R2 form a voltage divider that limits the Vgs to prevent damage to the MOSFET, and along with the capacitor form an RC delay that allows the FET Vgs to increase more slowly, keeping the FET in its ohmic region for a longer amount of time. Makes perfect sense. Higher capacitance = slower turn-on = less inrush current.

Well that's all fine and dandy, except that after increasing the capacitor from 1uF to 4.7uF to 10uF, I realized I bottomed out at an inrush current of around 1.5Apk over 2us. After reaching that point, no matter what capacitance I added for C1 (I tried up to 47uF) the inrush current wouldn't drop any lower than 1.5Apk. Obviously this current was still much too high and would blow my fuse in an instant. I can't increase the current rating of the fuse, so I need to find a way to make this work.

My current hypothesis is this: 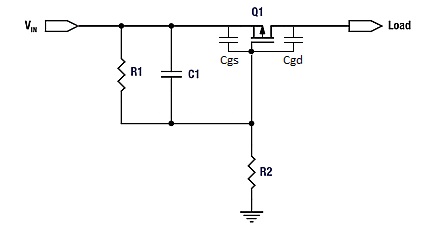 Cgs and Cgd are the intrinsic gate-source and gate-drain capacitances of the MOSFET, and while they are relatively very small (50pF-700pF), my theory is that they are acting as a pass-through when Vin is first applied. Since these capacitances cannot be reduced, they (especially Cgd) are the limiting factors that prevent me from lowering the inrush current below 1.5Apk.

What other options are there for limiting inrush current? I have found various one-chip solutions for hot-swap applications, but they have a similar topology to the above circuit and I imagine they would have similar drawbacks.

Vin can be as low as 5 volts, so if I take into account reverse polarity protection provided by a Schottky diode, the voltage drop across the fuse, the drop across the MOSFET on-resistance, and drops due to the cable (can be fairly long) connecting this board to the supply, my voltage drop is becoming fairly significant (the voltage regulator this is feeding into requires roughly 4.1V in order to regulate properly). A series current limiting resistor is unfortunately not going to be an option.

The other restriction I have is space. I have approximately 4.5 x 4.5 square millimeters to work with. The above circuit was just barely going to fit, so adding even more components is not really an option. Otherwise this would have been a slightly easier problem to solve.

You have sortof the right idea:

But the capacitor is in the wrong place. For slew rate control, it should be between the drain and the gate, not the source and the gate as you show it. Putting it between drain and gate causes feedback so that when the drain rises quickly, it turns the FET off more.

Just a cap between drain and source can be good enough. The timing relies on some parameters that are usually poorly known, and the slope limiting doesn't kick in until the gate gets to near its threshold voltage.

This device connects to the rest of the system via two CAN bus lines, ground, and 24 V power. It can be hot-plugged at any time. It can't be allowed to suddenly draw a large pulse of current when plugged in.

CANPWR is the direct connection to the 24 V power bus, and 24V is the is the internal 24 V power in this device. The purpose of this circuit is to make 24V rise slowly enough to limit the inrush current to a acceptable level. After that, it should get out of the way as much as possible.

A rising voltage slope on 24V causes current thru C2, which turns on Q3, which turns on Q1, which tries to turn off the gate drive to Q2, the power pass element. Note that this kicks in with less than 1 V on 24V.

Once the 24V net has risen, R3 holds Q2 on, and D2 keeps its gate-source voltage within the allowable range.

Electronic – Question about the Inrush Current in LDO

You are assuming the capacitor will be a true short, which it won't be, the voltage will never rise infinitely fast - remember there is inductance and resistance in real life to limit things. If we look at the formula for current through a capacitor:

We can see that I depends on the cap value and how fast the voltage source rises. The formula does not include the ESR though, so we have to allow for this separately.
This means that both the cap value/rise time and/or the ESR can limit the peak current - roughly meaning if the rise time is fast enough, the peak current will be limited by the ESR. If the result of the formula above is much lower than V/ESR though, then it will be limited by the capacitance value, or voltage rise time.
You can see both effects at once - initially at turn on with a fast rise time, there will be voltage divider effect between the wiring resistance and the ESR, then the capacitor charges as it would normally.

If we look at a couple of examples, using the same risetime of 1ns to 1V, but different ESR/Cap Value/Wiring Resistance.

With no ESR, we would expect I = 100uF * (1V/1ns) = 100kA. However, the resistance of the wiring and ESR of the capacitor divide to limit things to 500A initially, then the capacitor charges to 1V.

Now if we reduce the capacitor value to 10pF, but keep everything else the same, the current is limited by the capacitance value: I = 10pF * (1V/1ns) = 10mA:

The ESR has no effect here.

Now if we simulate a more realistic situation with the 100uF capacitor, wiring inductance of 100nH and increased resistance of 10mΩ wiring resistance and 50mΩ ESR we get something like this, where everything works together to limit peak current:

These are very simplistic simulations, you could go on and add the capacitors ESL, leakage current, wiring parasitic capacitance, etc.

About the capacitors on the input side of the regulator, without limiting they will be subject to large currents at power up regardless of the slew rate limiting on the output side.

Electronic – Why can some devices ignore the USB 10uF inrush limit

For the same reason that many devices ignore the requirement to enumerate and ask for more than 100mA of current.. because they can get away with it (most ports will work okay even with a big capacitor on there) and since there are lots of devices that ignore the 10uF limitation, then the computer designers have to make their ports work or face a lot of complaints from users about their crappy USB toys not working.

Your assumption that these work "without any problems" may not be correct. They could have problems with a minority of available host ports and not be overly concerned about that.