Let's say, we have a loop of wire of length \$L>0\$. Let's say, hypothetically, it is a loop of non-ideal wire. That means that the wire has a resistance per unit length \$ρ>0\$. Let's further assume that there is a changing magnetic flux through that loop of wire. Faraday's Law of Induction, as it is widely understood, dictates that a current will be induced in that loop of wire. Let's call that current \$I\$ (where \$I>0\$).

Now, for the sake of argument, let's divide that wire into infinitely many segments of infinitesimal length. Let each of those segments have length \$dl\$. That means that each segment will have resistance \$ρdl\$, and since each segment has the same current \$I\$ passing through it (KCL), the voltage drop across each segment should be \$Iρdl\$ (Ohm's Law).

Starting at any point in the loop of wire, we can sum up the voltage drop across each infinitesimal segment for the entire loop (the segments are in series):

This is essentially a long way of saying that KVL finds itself contradicted. But I took this long way to avoid answers such as "KVL simply doesn't work with magnetic fluxes". But how can it not work? What did I do wrong in all those steps? Which assumption was incorrect?

This is essentially a long way of saying that KVL finds itself contradicted.

What did I do wrong in all those steps?

When you said, " since we start at any point in the loop and come back around to the same point, that means that the voltage at that point (relative to itself) is both 0 V (trivially) and ..." you have already assumed that the lumped circuit approximation is valid and that there are no changing magnetic fluxes through the loop.

You assumed KVL would apply in a circuit where it doesn't apply.

Which assumption was incorrect?

But I took this long way to avoid answers such as "KVL simply doesn't work with magnetic fluxes".

You basically demonstrated the reason why KVL doesn't work in circuits with changing magnetic flux.

If you want a reason why KVL doesn't work in this scenario, then your logic is exactly that reason. It's because in this scenario the integral of the EMF around the loop is not zero but something that depends on the changing magnetic flux through the loop.

If you want to model this circuit within the context of the lumped circuit approximation and KVL, then you should treat each element of the loop not as a small resistor, but as a small section of the secondary of a transformer (with the primary being whatever is generating the magnetic flux through the loop). Then you have a term for the voltage across each element that won't sum to zero as you go around the loop and you won't get a contradiction.

This is why KVL even applies: KVL states that in any closed loop, the voltage across it is 0. It doesn't mean that the voltage must be 0 between any two points on that loop. It doesn't matter if there is any conductive path between two points. Having an ideal wire is just an extra statement that two distinct points are at the same voltage.

The wrong assumption is that any point on the wires 'A' and 'B' are equivalent and that they constitute discrete "nodes".

If you have a straight wire segment in a changing magnetic field, there will be a voltage gradient along the wire. This doesn't result in a current flow, because the EMF of the magnetic field is "holding" the charges and keeping them from redistributing to balance the voltage.

Basically, the simple forms of KVL only applies when there is no EMF.

You can actually see the same problem with an even simpler circuit: 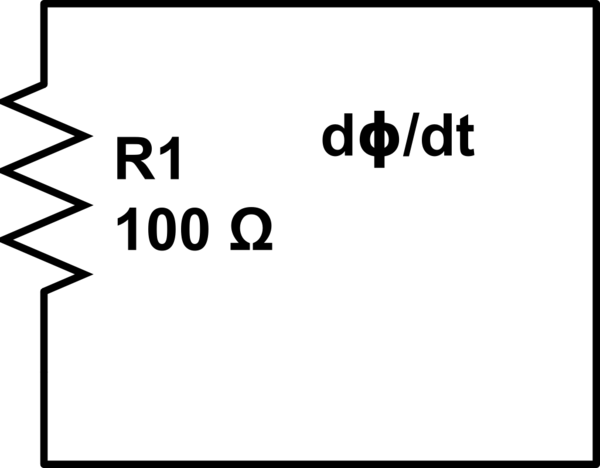 The EMF induces a current, and the the current generates a voltage drop across R1, but those are the same node!. Again, there is a voltage gradient across the wire connecting the two terminals of R1 in order to make everything work right.