Seeing a lot of mixed infomation around involving ground planes on multilayer boards. For a mixed signal mulitlayer PCB which is the preferred method? I know every board is different and it depends what your board is doing but I see alot of people with isolated ground planes yet Henry Otts advice is to do the exact opposite and partition the board in segments. Any advice or comments on this would be great!

It really depends on your design. Henry Ott says it will simplify your design in general.

Off the top of my head there are a few reasons you don't want split planes:
1) It turns your board into a dipole antenna
2) Crossing a split plane with a trace is bad because it increases inductance and complicates the paths for return currents. 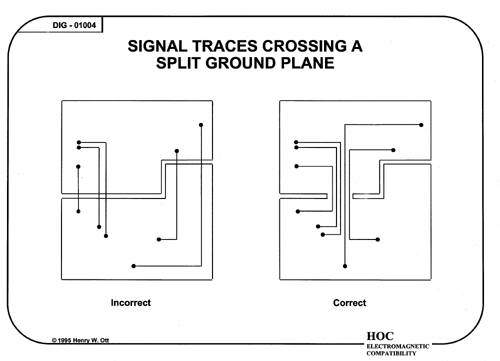 There are reasons for splitting planes, in some cases it can reduce common mode noise or noise on the analog side of the ground plane. If your isolating your analog section completely (which I would not recommend, but is sometimes necessary) then you will need split planes.

This split up arrangement would help from noise traveling between the modules?

If you have multiple power voltages and a 4-layer board you don't have much choice. You have to deliver different voltages to the different loads. Whether it reduces or increases noise has a lot to do with the details of how you lay it out, it's not possible to just give a blanket answer to this question. Better to look at it as, you have to split your power plane --- what's the best way to do that?

Would pouring up ground copper in the top and bottom sides help reduce EMI noise external to the board?

It can, if you provide multiple vias to connect the outer layer ground area to the ground plane. It will also make your fab vendor happy because it will reduce the amount of copper they have to etch to make your board.

Be careful of bringing the outer-layer ground too close to your 2.4 GHz traces because if it's closer than, say, 5 tracewidths it will change the characteristic impedance of your controlled-impedance line.

If you pay special attention to how you split up the power plane, and if your circuit demands it, then there are cases where it can improve things.

But if you want a single answer from somebody who knows almost nothing about the circuit you're designing, then the best answer is not to split the ground plane.

One more thing to watch for

Your stack up is signal-ground-power-signal. With splits in the power plane.

When you route on the bottom layer, try not to cross the splits in the power plane, because those bottom layer traces will actually be using the power net, not ground, as the return path for high-frequency components of the signal.

I am making sure all the HF signals don't cross splits, but there are a few DC tracks which unavoidably cross them. Can that be a problem?

So it depends if you're talking about a "dc" signal like an enable line for a power supply that's turned on once at start-up and then left at the same voltage forever, or a power track for some extra rail that wasn't worth making a split for.

A DC control signal will be no problem.

Does ferrous/non-ferrous matter for ground planes

Both your provided links sound like they were written by someone with very little understanding of how antennas work. I would ignore them entirely.

A ground plane is a necessary part of a monopole antenna, often called a "vertical" since that's how they are usually mounted. These antennas are essentially half a dipole, with the other half being the electrical "mirror" of the antenna on the other side of the ground plane.

The only requirement for the ground plane is that it conducts. The more conductive it is, the better. The bigger it is, the better. Professional AM radio broadcast antennas use lengths of copper wires buried just under the ground, radiating out from the base of the antenna, to make the Earth more like an ideal ground plane. I'm sure if iron worked better, they'd use iron, as it's much cheaper than copper.

If I had to guess, the reason CB operators think ferrous metals make better ground planes are two-fold:

If you don't actually have an antenna, then none of this applies. The lesson to be learned is this:

Don't use references written by CB operators as a source for learning about electrical engineering of any sort.