I'm trying to troubleshoot a delinquent power supply I have. Most recently one of the transistors (Q1) actually exploded on it. This has led me into investigating the schematic, but try as I might, I can't make heads nor tails of what's going on. I'm an electrical engineer (but optics) and will admit being a complete noob with electronics, but I'm trying to change that.

I've attached the circuit diagram. For starters, rather than "HOW DOES THIS THING WORK," my more specific question is how the UA/LM723 operates in the circuit; that is, what is its job, and how does it do it? I have seen another LM723 in almost the exact same setup elsewhere, but the site was in Russian. I have also spent about half a day playing around with the various configurations on the datasheet to try and get a feel for how it works. However, I don't understand:

a) why the zener is shorted to ground, and the effect of this (I have seen it either greatly limit the range of Vo, or make the whole thing unstable)
b) what the role of the LM723 is in this circuit. I understand that it is responsible for varying the voltage (and regulating it), how is it accomplishing this?
c) BONUS, if not too strenuous, I know that Q3/4 is likely the main pass transistor and thus responsible for full current handling, but what are Q1 and Q2 doing?

I'm quite lost after spending some time monkeying with this, so any direction is greatly appreciated. 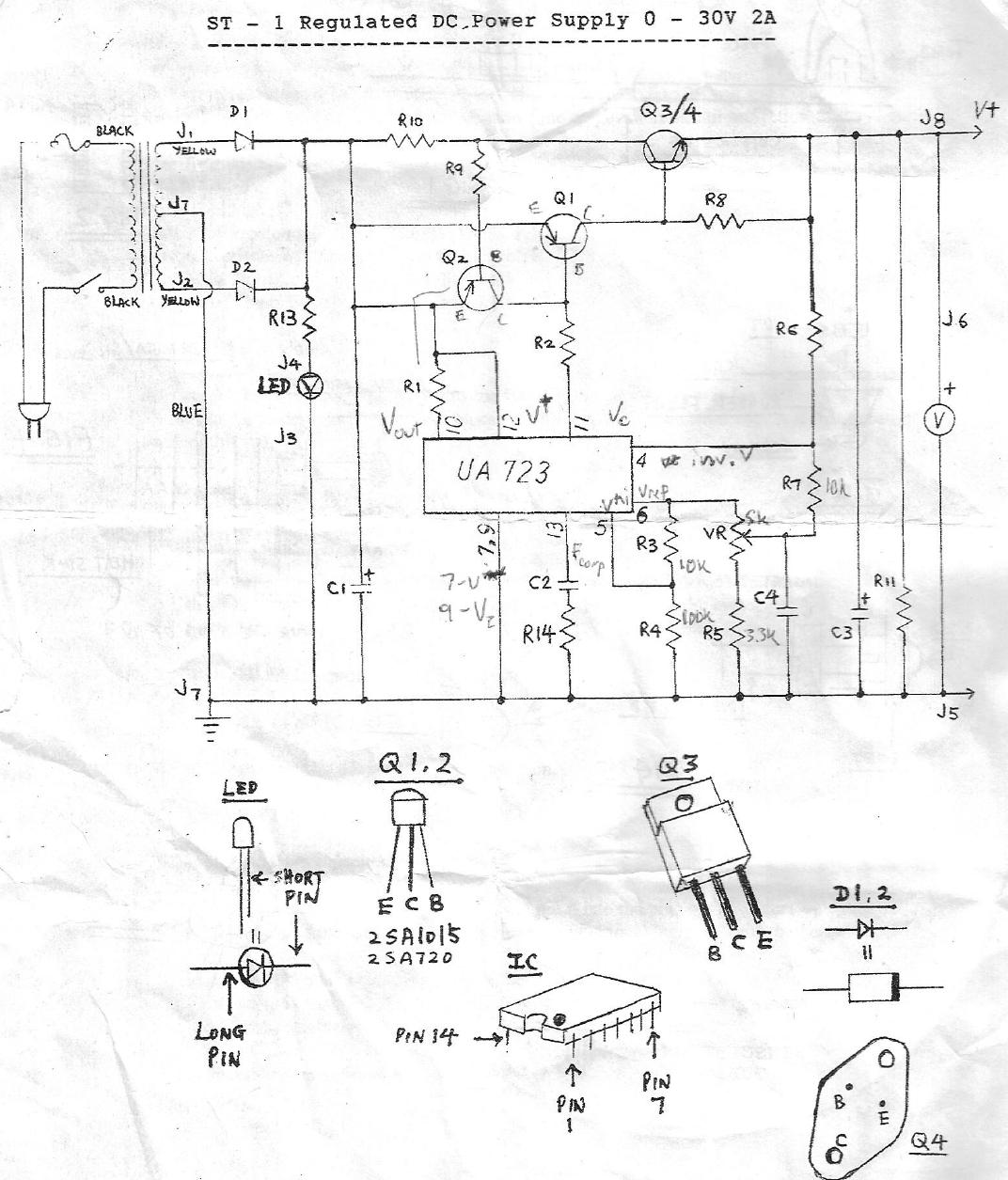 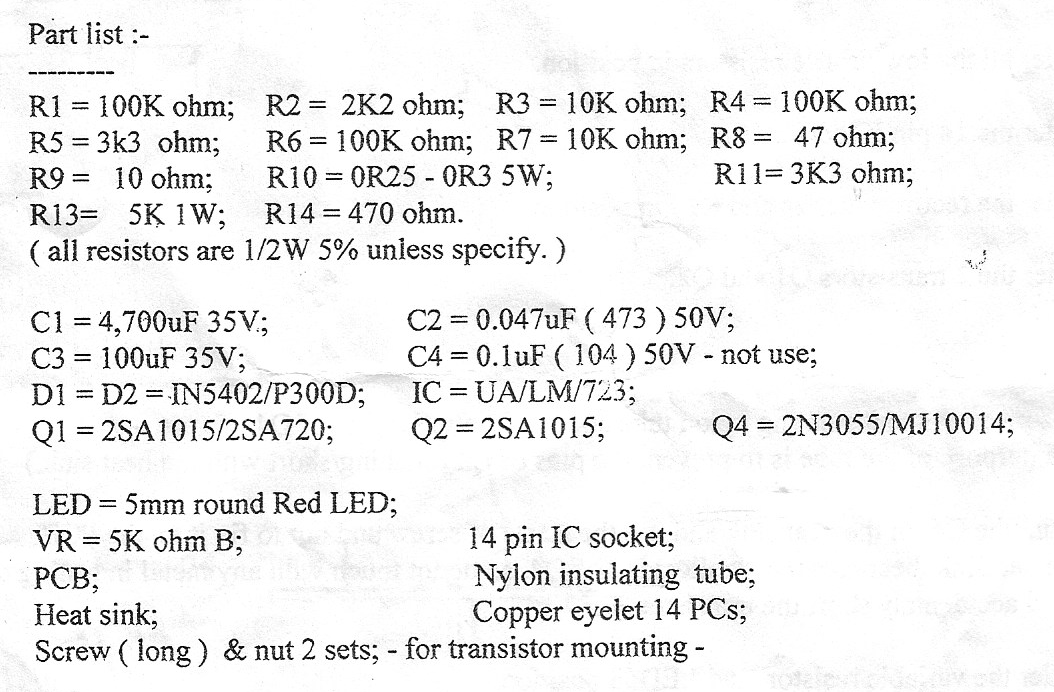 UPDATE: I checked the 3055, and it has 550 ohms from emitter to base (i.e., black lead on emitter); and about the same from collector to base (black lead on collector). Everything else HI. I think that my pinout is correct (used http://www.rmcybernetics.com/images/users/diy_coildriverSd2gH5.jpg).

See at end for specific details of your circuit's operation.

If you need to repair this circuit with original components then it will be possible to do so. But you can probably achieve an easier result by using the existing Q3/Q4 (IF they are still undamaged) plus an LM317 (or LM317HV higher voltage version). The LM317 is used to provide a variable output voltage supply AND to drive Q3/Q4 to provide more current than the LM317 can by itself.

Easier still, you can get LM317's that provide up to about 1.5A so one of these may do what you need by itself. If so, it would need to use the heatsink that Q3/Q4 use at present. You can parallel LM317's - ideally add a small output resistor between Vout and feedback resistor network to achieve current sharing.

1 x LM317 will possibly do what you want.
Two in parallel may well work if you add say about 1/4 Ohm in output of each to help share the current. Put the sense resistor divider on the Vout side of the resistors.

LM723 was the bees knees voltage regulator controller and maybe also the only one readily available 'way back when'.

You mention 2N3055 in comments but not on diagram or in question.
2N3055 was the workhorse power transistor of the day.

LM723 pinout below. I've added DIP pin numbers as those match what you show.

Pin 6 provides a buffered reference voltage - the forerunner of a modern bandgap reference.

The error amplifier (4 5 inputs) is used to compare a reference voltage with the voltage to be controlled.

The zener (10,9) provides a stable voltage that the output can pull down to.

Q2 is a current limiter. When the load voltage across R10 exceeds about 0.6V it turns on Q2 which clamps Q1 Vbe to reduce voltage. Current limit is about I= V/R = 0.6/R10. For 2A current limit R10 is about 0.3 Ohm - probably somewhat less to avoid starting to clamp too early.

Vref appears on pin 6.
This is divided by R3/R4 and fed to the error amp non-inv input pin 5. This will be compared to a sample of the Vout voltage. Pin 4 = error amp inverting input is fed with an interesting arrangement. Vin is divided down and stood on top of as "pedestal' made from Vref scaled down by Vr and R5. 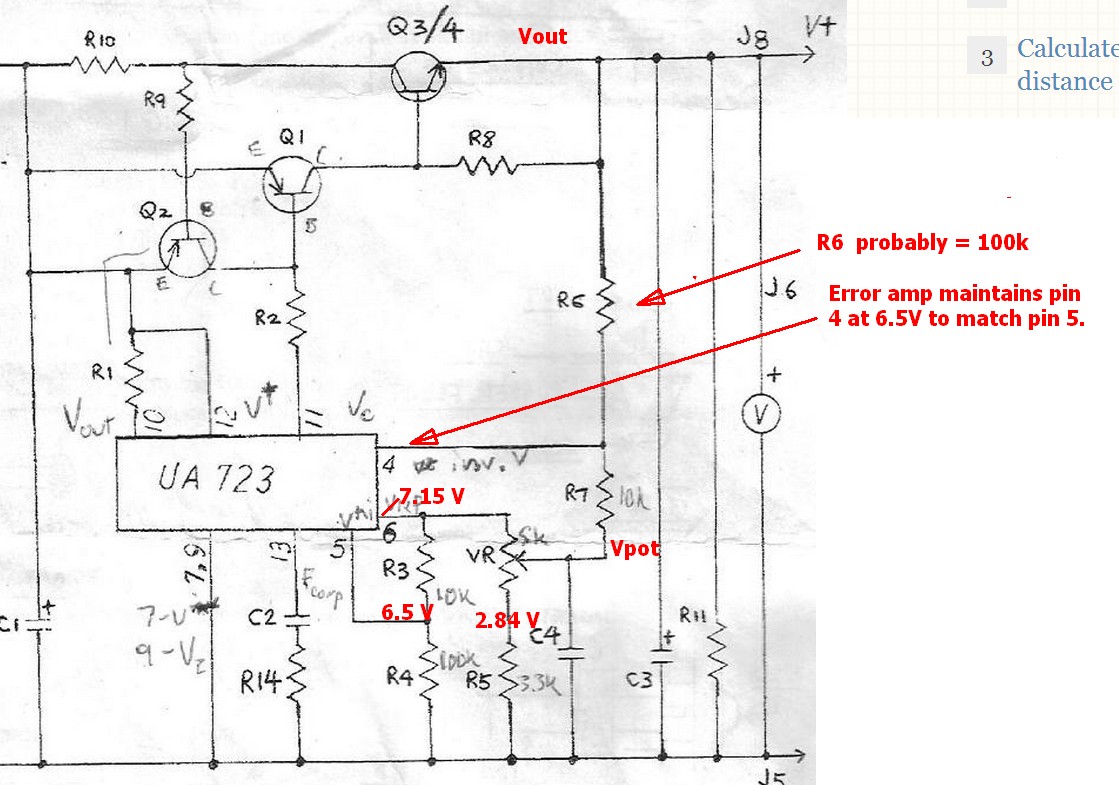 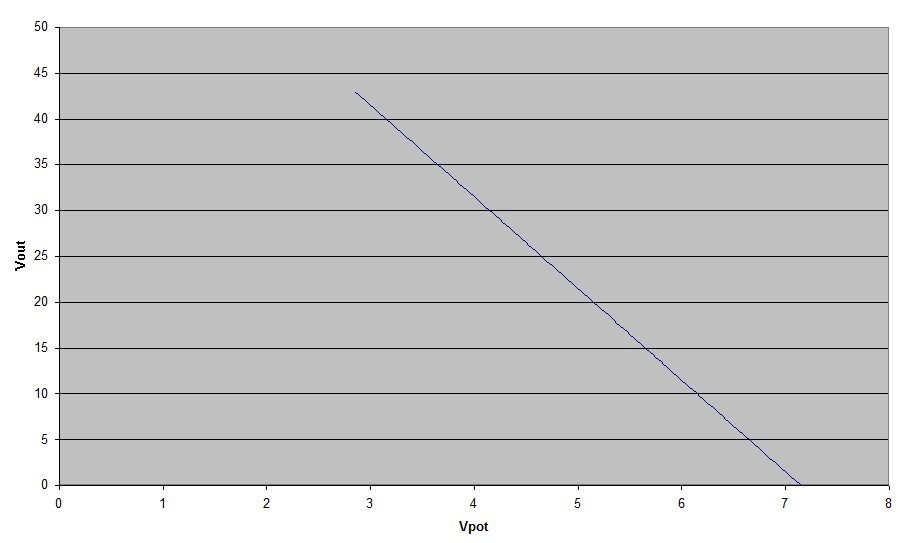 The circuit is MUCH easier to understand if you draw it with the 723 internals shown and arrange it around the 723 in logical fashion. 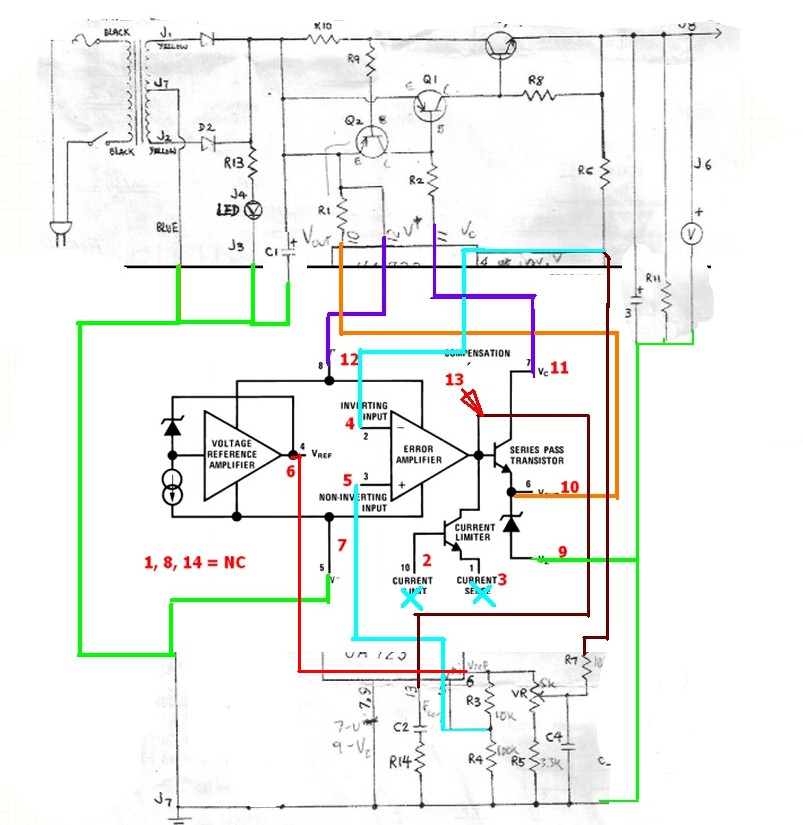 Above I named the ratio of R6:R7 as "k". Is set k=10 making R6 = 100k as that produced exactly zero Volts out at maximum pot value (ignoring pot loading) which is likely the designers intent.

If you change k in steps of 2.5 from 2.5 to 20:1 you get the family of curves shown below. ie the supply range can be altered by changing R6, subject to their being enough Vin and nothing blowing up from overvoltage.
The negative Vout will of course not happen with a ground referenced positive input supply, but would be possible if Vin was referenced against some negative value.
The common zero point of 6.5V occurs when Vout = Vpot = 6.5V = divided reference input to opamp. 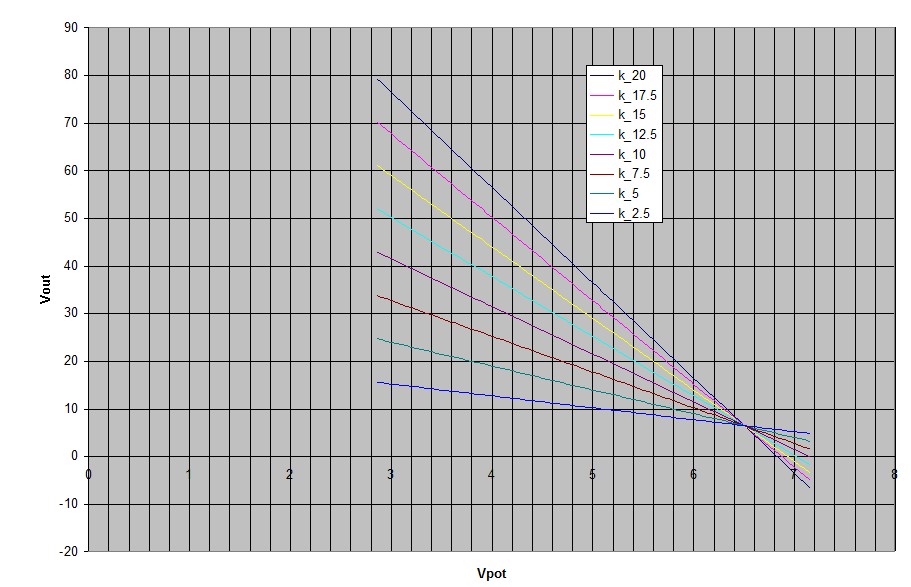 I haven't finished the functional description above but the added material should give you a very good insight into operation.

So how do the transistors function? I have a basic grasp on their operation, getting more familiar with small signal characteristics, etc, but besides knowing the 3055 is the pass transistor and power transistor, that's about it. What went into the design of that portion, especially with the feedback transistor? Why use that instead of the current sense/limit?

Design: They started with a 2N3055 because it was available & cheap and & high powered. The Model T of the power transistor world.

The current limit is crude in that it has no "foldback" action - it limits current AT 2A if you try to draw too much. If you eg short Vout then the 3055 will dissipate about 2A x ~30V = ~60 W. A 3055 will probably survive that if the heatsink is good enough.

The current limit works by dropping voltage across R10. When this reaches ~~~= 0.6V it will turn on Q2 which shorts the base drive to Q1 so the 3055 shuts off enough to maintain balance.

Retrospective: The design followed relatively logically from what was available at that time. The 2N3055 was the logical choice of pass transistor, and as it was NPN you needed Q1 to invert the drive polarity and give current gain. If you wanted current limit the arrangement used was simple obvious and standard fare. If you wanted to go to zero Vout you needed some cunning due to the non zero reference voltage so the upside down pot polarity system was used. I'm not overly familiar with such things but I suspect it was probably standard practice in that day.

In fact, the output is not held at exactly 12 volts. If the 7812 output is at 12 volts, then depending on the current levels at the load the output voltage will be less than 12 volts, and possibly a good deal less.

EDIT - As Russell McMahon pointed out, I was ignoring the diode in the linked circuit. I was also ignoring the fact that 7812s have a nominal output in the range of 11.4 to 12.6 volts. Combining the two suggests that the base voltage will be in the range of 12.1 to 13.3 volts. Apply this as appropriate to the following. In effect, the added diode is intended to compensate for the transistor base-emitter voltage drop. And it does, but not very well. END EDIT

With the base held at 12 volts, the voltage drop of the base-emitter junction will determine the exact output voltage. Since this is a silicon transistor, the usual number is a voltage drop of ~0.7 volts. However, that number really only applies at currents around 1 to 10 mA. For 3 amps you should expect a voltage drop in the range of 1.5 to 1.6 volts. The base current supplied by the 7812 will be multiplied by the gain ($h_fe$ or $\Beta$) of the 3055, so the 7812 does not have to provide an enormous amount of current, although at maximum current the gain will drop, so you might expect a gain of 20 or so, for a base current requirement from the 7812 of 150 mA.

For an open circuit (no load), you can expect about 12 volts from this circuit. At 3 amps, something in the vicinity of 10.5 volts, or maybe a bit lower. This is not a very good circuit (but it is simple and cheap).

The other thing you need to watch out for is power dissipation. At full output and a 24 volt supply, The 2N3055 will be dropping about 13-14 volts, and will be carrying most of the current (at least 95%). So the power dissipated will be about 3 amps times 14 volts, or roughly 40 watts. If you build this, you must provide a fairly beefy heat sink for the transistor. Also note that, due to the low gain at high currents, the 7812 will dissipate significant power. To provide 150 mA of base current at a supply voltage will dissipate .15 amps times 12 volts, or 1.8 watts. This is more than a bare 7812 can handle without going into thermal shutdown, so you will also need a heatsink here as well, although not nearly as big as on the 3055.

Okay, I think somewhere in here one of these matches your verbal description. I ran the simulation with the built-in circuit simulator and the voltages are correct for the type of LED used. 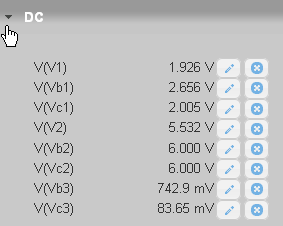 R7 just simulates the input resistance of your meter, so the emitter is open.

In cases 1 and 3 the transistor is saturated and has < 0.1V across it (collector to emitter).

In case 2 the transistor has about 0.5V across it (less than the usually quoted 0.6 or 0.7V because the meter draws almost no current).

I don't see anything that resembles 1.2V there. If it's an IR LED then you could get 1.2V and then V1 would be 1.2V but the other voltages should be the same as shown above.