Looking at a reference design board from Xilinx, we noticed the placement of the termination resistor for a differential clock line (~300 MHz): 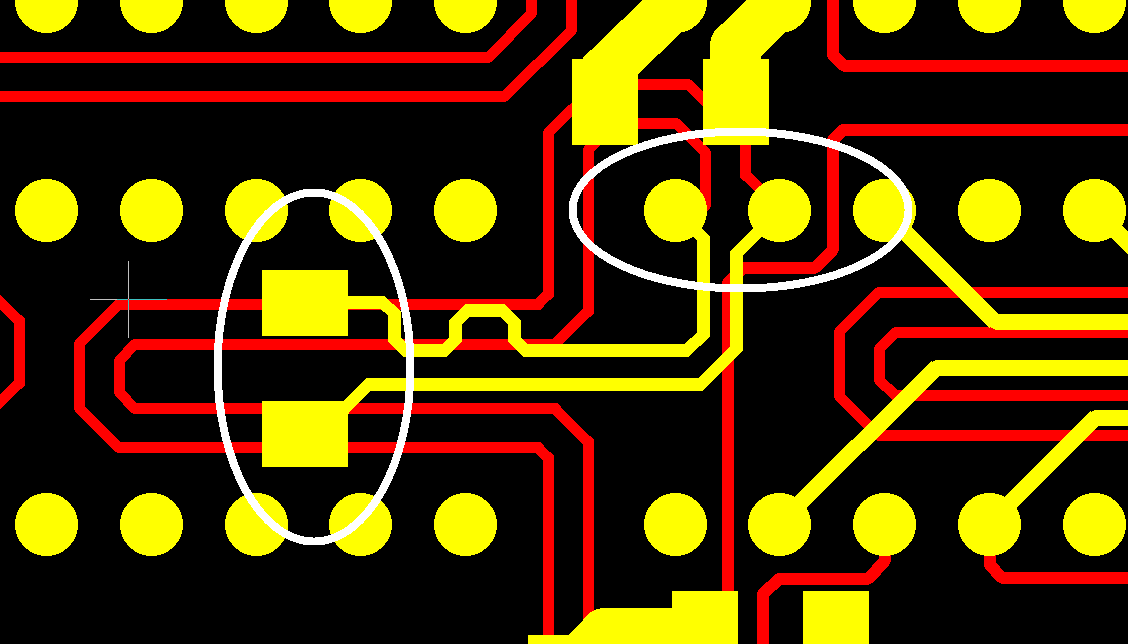 The resistor is placed not at the closest possible location, which would be right under the vias which receive the clock (there appears to be a lot of space), rather, it is placed "far away", to the left of the vias. We are wondering if there is a good reason to place a differential termination resistor that way. Any ideas?

The reason for this is that the termination prevents the signal from reflecting back to the receiver(s) and corrupting their signal. In theory you could have a super long trace from the last receiver to the terminator and that would work just fine!

That is why your termination resistor is not near the driver-- because it doesn't have to be. The resistor is at the end of the line, right where it should be. There are other reasons why the resistor is placed that far away, but that isn't too important.

As for the little squiggles, that is because in a differental signal the lengths of the two traces should be identical in length. The Squiggles are done to adjust the length of one trace to make it match the other trace.

Talking about signal termination is like opening a can of worms. This is a HUGE subject that is difficult to summarize in just a couple hundred words. Therefore, I won't. I am going to leave a huge amount of stuff out of this answer. But I will also give you a big warning: There is much misinformation about terminating resistors on the net. In fact, I would say that most of what's found on the net is wrong or misleading. Some day I'll write up something big and post it to my blog, but not today.

Most PCB traces have an impedance from 40 to 120 ohms, which is why you found that a 1k termination resistor did almost nothing and a 100-ish ohm resistor was much better.

Your termination, a single resistor to ground at the far end, is actually not a very good. In fact, it's wrong. People do it, but it isn't ideal. Ideally that resistor would go to a different power rail at half of your power rail. So if the I/O voltage is 3.3v then that resistor will not go to GND, but another power rail at half of 3.3v (a.k.a. 1.65v). The voltage regulator for this rail has to be special because it needs to source AND sink current, where most regulators only source current. Regulators that work for this use will mention something about termination in the first page of the datasheet.

The big problem with most end-termination is that they consume lots of current. There is a reason for this, but I won't go into it. For low-current use we must look at source termination. The easiest and most common form of source termination is a simple series resistor at the output of the driver. The value of this resistor is the same as the trace impedance.

I said before that your series resistor for source termination must be located at the driver, and it must have the same value as your trace impedance. That was an oversimplification. There is one important detail to know about this. Most drivers have some resistance on it's output. That resistance is usually in the 10-30 ohm range. The sum of the output resistance and your resistor must equal your trace impedance. Let's say that your trace is 50 ohms, and your driver has 20 ohms. In this case your resistor would be 30 ohms since 30+20=50. If the datasheets do not say what the output impedance/resistance of the driver is then you can assume it to be 20 ohms-- then look at the signals on the PCB and see if it needs to be adjusted.

Another important thing: when you look at these signals on an o-scope you MUST probe at the receiver. Probing anywhere else will likely give you a distorted waveform and trick you into thinking that things are worse than they really are. Also, make sure that your ground clip is as short as possible.

Conclusion: Switch to source termination with a 33 to 50 ohm resistor and you should be fine. The usual caveats apply.

There are 2 reasons for using an RC end termination topology. (can only be used on signals with 50% duty cycle such as - clocks)

If you do not care about either of these then a single far end resistor will do. (screw the cap) and you can end the resistor to either Vcc or Gnd.

If you do care, then connecting the capacitor to either Gnd or Vcc should be fine. The capacitor will appear to be a short circuit during the edges, which is what you want and the average voltage between the capacitor and the resistor would be 1/2Vcc, which reduces your power.