This question is somehow the continuation of this question : Batteries and running time (reed the comments for more information)

And my question is, can I protect my lithium battery in parallel like so ? 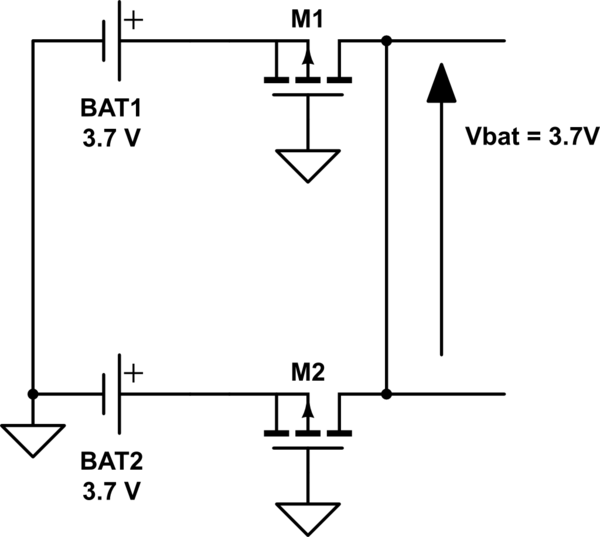 The PMOS have a very low Rdson.

The only really simple solution to have several parallel batteries supplying the same load is to replace your fets with diodes. The diodes can be low drop schottky types, but you still easily lose 10% of the voltage. Note: no charging is possible through those diodes.

The zener diodes have no place here until you have some complex active circuit.

In theory you could have a multi-input switching regulator and a controller that that takes the next pulse from the battery that has most charge still left. You need only one set of inductive and output circuitry, but the circuit that distributes the intake load properly to the batteries needs to be developed. There exists battery balancing controller ICs for serial batteries. They're a must in modern high power battery systems. Unfortunately I do not know how they could be adapted for this.

Electronic – Options for getting 3.3v @ 220mA from small batteries

Coin cells will not work well with your needs. While it varies by brand and size, most coin cells have low capacity, and an internal resistance that limits current output. A CR2032 has a nominal 250ma capacity (and that varies based on current load btw), and an internal resistance (Equivalent Series Resistance or ESR) of 18 to 30ohms, again based on current load). Depending on the speed of the current draw, you are going to get voltage drops, and quickly drain the coin cell. If you can get that much current out of it at a given time. 70mA is pushing it even for high quality CR2032, and 220mA is improbable, frankly, impossible. That is why your CR2032 boosted to 3.3v isn't working. The current draw of the regulator is causing the cell's voltage to drop.

As for your options, one or two AAA batteries with a boost converter would suit you better. It gives you relatively high capacity while still keeping space to a minimal. The TPS61200 you mention would work, if you can deal with a tiny (3x3mm leadless package. The TPS6107x family would do the same, same minimal components, in a sot6 package. You only need 1 battery for either of these. An AA gives 2400mAh nominal, an AAA gives 1200mAh nominal.

In such cases a very reasonable charging strategy is to terminate charge at 1.45V per cell.

It is reasonable to believe he is referring to "at the cell".

It is worth noting that BQ2002PN is a FAST charge. You need to ensure it will not burn out your Cells. A good charger will switch between slow and fast. In-circuit application charging should design the charge rate to exceed the discharge rate of the applications load and consider the margins. It is more then acceptable to use a fixed supply voltage and resistance to supply a minimal charge rate. Assuming it is not too high, a small trickle small enough not to exceed self heating, works.

Before Low Self Discharge Cells we made a +12V with Diode drop and Resistor to slow charger for a dozen parallel Cells, (i.e "Hot and Ready", not really hot). It is cheaper than a smart charger. And we could keep the charge rate very low. Lower then most chargers slow rate as they are still higher (enough for larger capacities) than needed and wasteful.

In fact I have several Maha and LaCrosse (nice chargers) for NiMH, but they are too smart. When using more than one cell, on a load, in series (typical 3 and higher) they UN-evenly discharge. Where one gets below the Under Voltage sense and considers it a failed cell. But putting it on a 5ma source for a minute kicks it up and then it works on the Smart Chargers.

You should refer Ada's page on Minty Boost. LiPo's are the in spot for in circuit charging and plenty of chargers for them. Such as SFE's Lipo Charge Boost. There are plenty of examples out there.