I am working on an SMD hobby project (2 layer board) where I use a STM32F405 MCU running at 3.3V, clocked from a 25MHz external crystal. Being impatient, I hastily designed a board and ordered it. However I have apparently missed a whole lot of points regarding PCB design in regards to the external crystal.

The result did not work so well, as you might expect. When I switch to the external oscillator, the CPU seems to run. But the MCU clock is very slow, and switching a GPIO ON and OFF in the main loop yields an approximate 1 kHz square wave (I've not had time to check the frequency using a clock out pin yet).

The crystal is oscillating at 25 Mhz, but I only measure a sine wave with slightly below 500mV p-p amplitude (using a x10 Oscilloscope probe). I would expect this to be closer to the 3.3V supply voltage (I cannot find much documentation which states what is to be expected.) I also do not understand how the MCU is running at all, as it definitely does not halt in the loop waiting for the oscillator to start. But it does not run at the correct speed at least. So any hints at what's going on would be appreciated.

After studying the topic of MCU crystal PCB design in more detail, I've got a fairly good idea about what I got right and where I failed spectacularly. But I am still quite confused to what is the definitive correct way to do this.

The stuff I got correct:

The stuff I got very wrong is:

I thus suspect the stray capacitance of the design explains the low Vp-p in the 25MHz oscillator. So as a first remedy, I'm planning to switch to a 8MHz crystal in order to just get it working. Does my assumption here make sense, and would an 8 MHz crystal have a better chance of working on my bad board? (I would like to get the current board working, even if the design is sub-optimal/really bad).

Of course, the final plan is to make a second revision board where the design is fixed. But there are a couple of things which I still find confusing in documents I've read so far:

So any explanation regarding this apparent contradiction would be appreciated. Also, any other pointers to me regarding the "best way" to lay out my Rev2 board would be greatly appreciated.

EDIT: Pictures of the PCB are found below. C3 and C4 are the capacitors and R6 (which is in between the Caps) is Rext. (Sorry for the bad contrast). 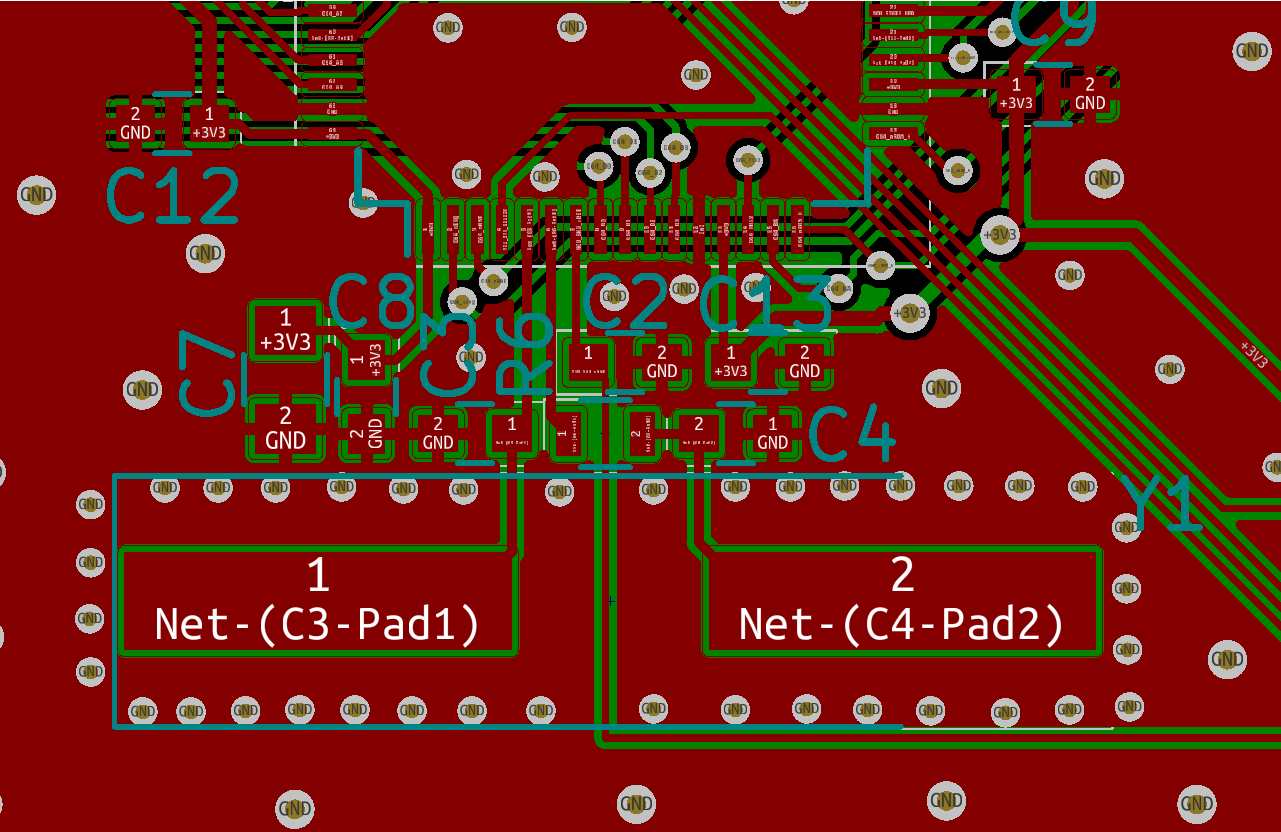 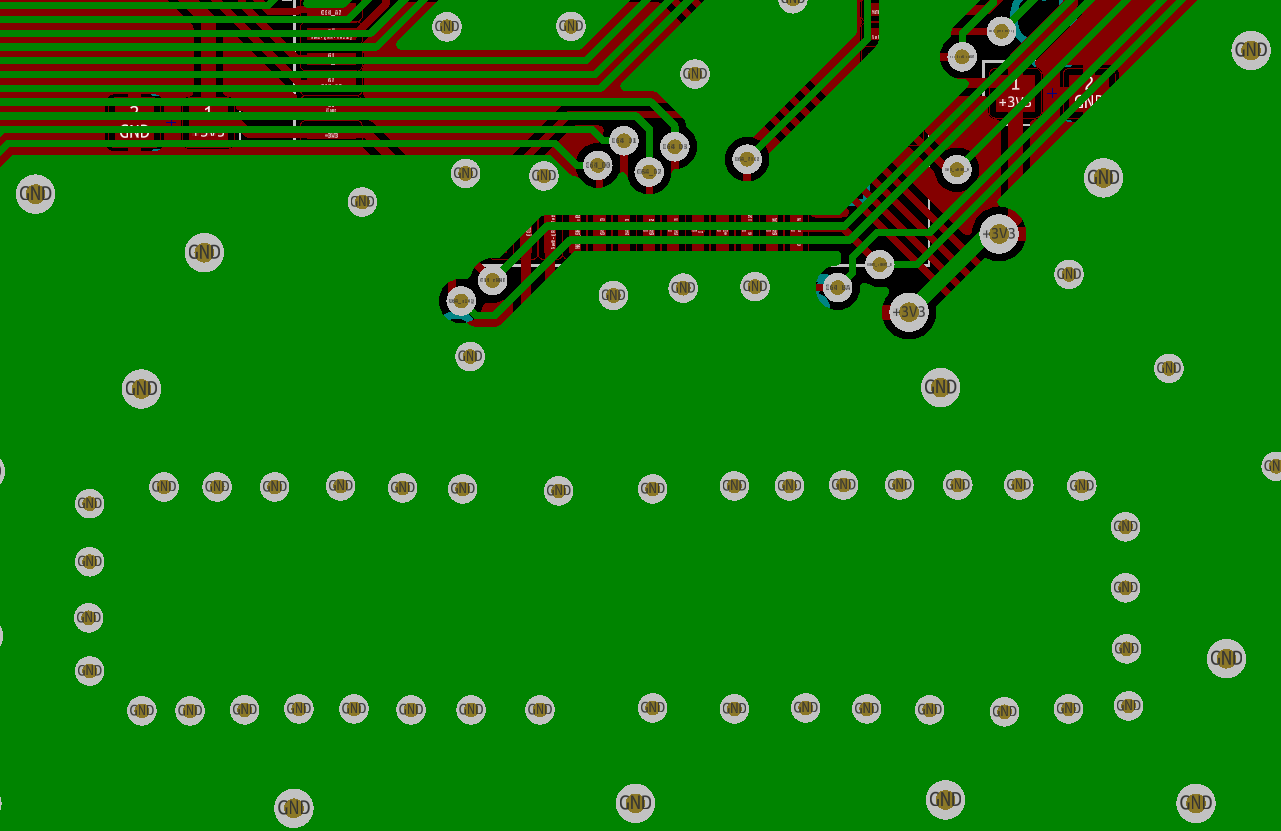 If the crystal is oscillating at 25MHz then your apparent problem is elsewhere, perhaps configuration of the clock divider, PLL or whatever that particular chip incorporates. Make sure your measurement is not affecting the oscillation.

None of the items you mention are likely deal killers. It’s quite normal for the voltages at the crystal to be small relative to the supply voltage, even when properly measured with a FET probe.

Sometimes a series resistor is even used to reduce the drive in order to avoid damaging the crystal with excessive drive power, especially for small SMT crystals that are limited to 100uW or less drive.

Your placement is fine.

Your routing of the crystal signal traces is fine.

Your grounding is bad. Fortunately, doing it better actually makes your PCB design easier. There will be significant high frequency content in the microcontroller return currents and the currents thru the crystal caps. These should be contained locally and NOT allowed to flow accross the main ground plane. If you don't avoid that, you don't have a ground plane anymore but a center-fed patch antenna.

Tie all the ground immediately associated with the micro together on the top layer. This includes the micro's ground pins and the ground side of the crystal caps. Then connect this net to the main ground plane in only one place. This way the high frequency loop currents caused by the micro and the crystal stay on the local net. The only current flowing thru the connection to the main ground plane are the return currents seen by the rest of the circuit.

For extra credit, so something similar with the micro's power net, place the two single feed points near each other, then put a 10 µF or so ceramic cap right between the two immediately on the micro side of the feed points. The cap becomes a second level shunt for high frequency power to ground currents produced by the micro circuit, and the closeness of the feed points reduces the patch antenna drive level of whatever escapes your other defenses.

Added in response to your new layout:

This is definitely better in that the high frequency loop currents are kept of the main ground plane. That should reduce overall radiation from the board. Since all antennas work symmetrically as receivers and transmitters, that also reduces your susceptibility to external signals.

I don't see the need to make the ground trace from the crystal caps back to the micro so fat. There is little harm in it, but it is not necessary. The currents are quite small, so even just a 8 mil trace will be fine.

I really don't see the point to the deliberate antenna coming down from the crystal caps and wrapping around the crystal. Your signals are well below where that will start to resonate, but adding gratuitous antennas when no RF transmission or reception is intended is not a good idea. You apparently are trying to put a "guard ring" around the crystal, but gave no justification why. Unless you have very high nearby dV/dt and poorly made crystals, there is no reason they need to have guard rings.

At 16MHz matched length traces will not provide any benefit. They key however is to ensure that your GND return paths are short and that the crystal lines are isolated from clocking sensitive traces such as Uart RX or Reset lines, or any other functional traces to which coupled clocking could cause false interrupts or undesired functionality. To the Grounding, I would suggest placing some vias close to the GND paths of the load capacitors rather than relying on the GND trace back to the MCU. I generally place a 0.2/0.4mm via near every signal component ground pad where possible and at least 3 0.4/0.8mm vias for power or transient prone components. The general rule for noise/high speed is to keep your ground impedance as low as possible.

Your layout doesn't indicate whether the polygon pour on the bottom layer is ground, but in the event it is then I would suggest stitching it with some GND vias and applying a polygon GND fill on the top layer once your layout is complete. Try to stitch around any high speed or noise sensitive lines with GND vias.

Also, be mindful of trace-pad exits which are not at 90*. Acute angles between pads and traces will result in "acid traps" during the etching process and in the case of hand etched PCBs, may not etch correctly.

Also consider the local plane for VDD. Larger copper areas will be more susceptible to noise than wide traces with close grounding. I generally prefer to place such power fill on internal layers between GND planes for BGA escape. If your top layer is to be GND filled than this won't be a problem provided it is well decoupled.