I'm a hobbyist interested in re-designing and implementing a DC power supply providing a \$+5V_{DC}\pm 200mV\$ output with a current compliance of \$50mA\$ (I could live with \$30mA\$ successfully) from a \$230V_{AC}\$ @ 60Hz split-phase US mains supply. This supply will be completely sealed and there will be no access at all to any conductors outside the sealed package, except for the AC input wires. The DC is used with a microcontroller, which itself will also be inside this sealed package. So there is no way anyone can make any contact with either the DC ground or the \$+5V_{DC}\$ lines. Think of it as a brick with only the two hot AC power input wires, plus ground, leaving the brick. (It is actually a micro that accepts fiber optic signals and controls four SCRs as part of a hybrid relay system gating the \$230V_{AC}\$ for an H1/H2 output. But that's a longer story.)

My goal is to come up with an approach that uses the least volume while using reasonably available parts and/or ones I can reasonably fabricate. (Reasonable is something I can't define well, but it tends to mean that I don't want to use parts that are very expensive or very difficult to come by in hobby quantities.)

This opens up a few questions:

(In answering the above, I'm able to wind and test transformers and coils and I do have access to oscilloscopes, lab supplies, and the usual tools that a modest hobbyist might accumulate. And feel free to criticize the earlier design approach, too. I'm just a hobbyist and will take my lumps, with pleasure.)

The target volume is something smaller than \$1 \, in^3\$. The existing design uses commonly available parts.

This is the smartest offline regulator that fits your requirements for size, simplicity and low cost. The regulator only charges the cap line rectified input is <32Vdc. It is adjustable. 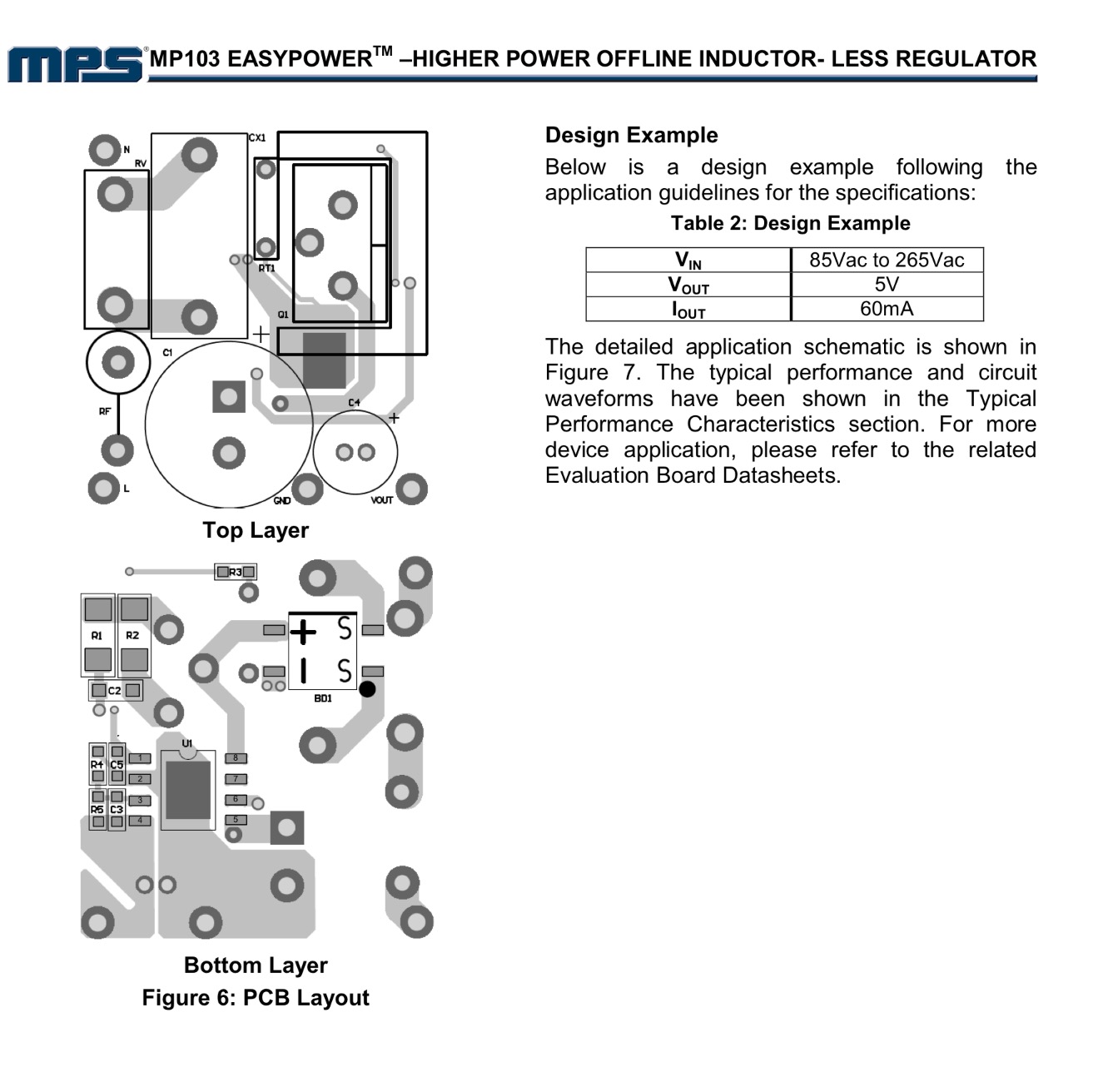 Since your requirements do not include cost, availability and are only looking for a prototype quantity and you don't have access to Far East suppliers, and the interface requirements to the grid and heat loss in a small thermally insulated 1" cube, your options will always be a compromise. The easiest one to adjust is volume, your artificial requirement.

The simplest is a bridge and a series self-healing X1 cap. The load Cap will act as a voltage divider from 340Vp to 8Vp which is then clamped with a 5V Zener The load is a combination of the duty cycle of pulsed current to charge the cap and linear current to discharge the cap.

This is easy at 50mA but values of C escalate quickly with load current beyond 50mA making size and cost undesireable.

Anyways my answer is this 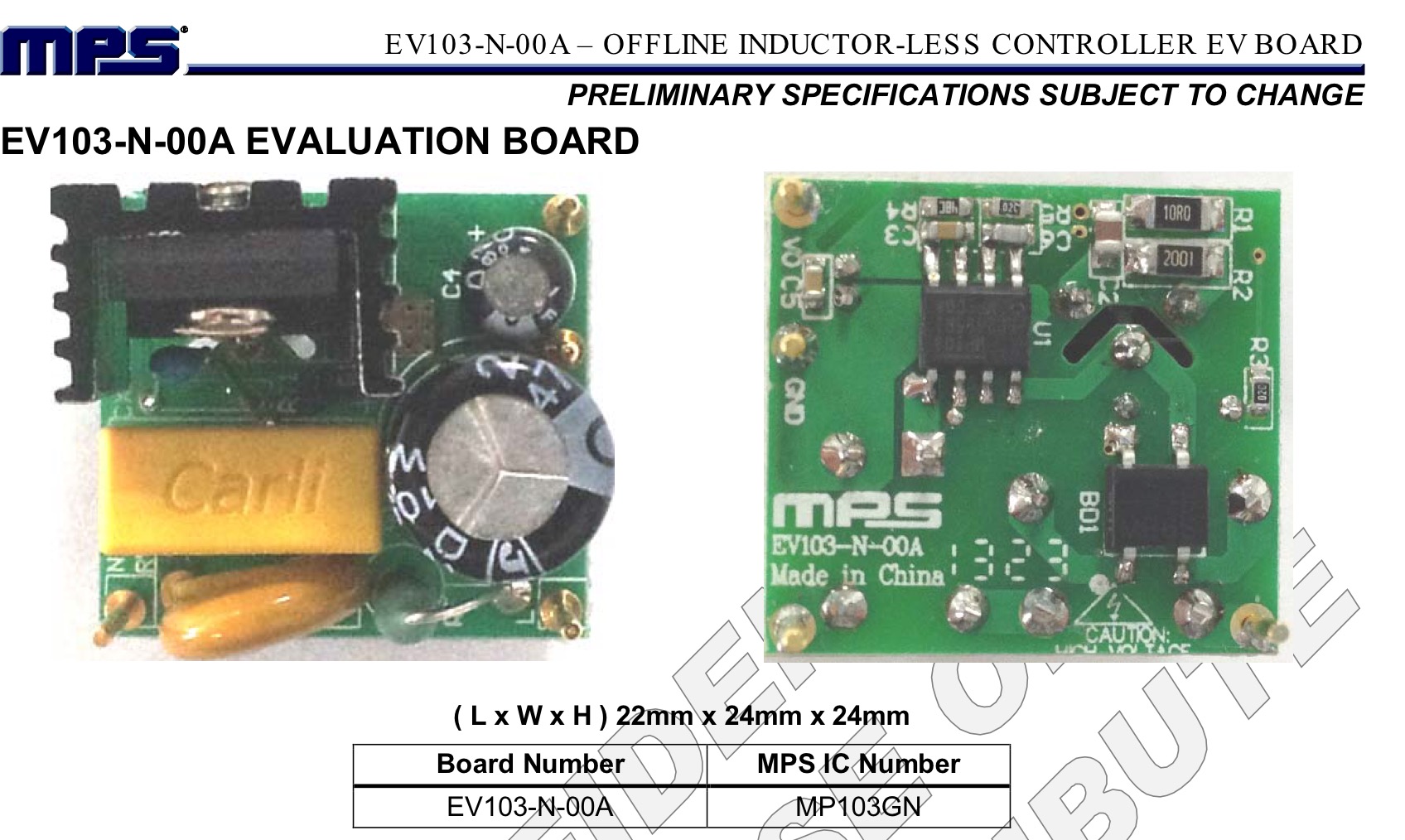 Electronic – How efficient is a capacitive power supply

Such a device has a power factor near 0, making it questionable whether it meets EU-mandated power factor laws, such as EN61000-3-2. Even worse, when such a device is plugged into a "square wave" or "modified sine wave" UPS, it has much higher power dissipation (worse efficiency) than when plugged into mains power -- if the person who builds this circuit does not choose safety resistors and zener big enough to handle this additional power, they may overheat and fail. These two drawbacks may be why some engineers consider the "CR dropper" technique "dodgy and dangerous".

How does the capacitor step down the voltage?

There are several ways of explaining this. One way (perhaps not the most intuitive):

One leg of the capacitor is attached (through a safety resistor) to the "hot" mains which oscillates at over 100 VAC. The other leg of the capacitor is connected to something which is always within a few volts of ground. If the input were DC, then the capacitor would completely block any current from flowing through it. But since the input is AC, the capacitor lets a small amount of current flow through it (proportional to its capacitance). Whenever we have a voltage across a component and current flowing through the component, we electronics people can't resist calculating the effective impedance using Ohm's law:

(Normally we say R = V/I, but we like to use Z when talking about the impedance of capacitors and inductors. It's tradition, OK?)

If you replace that capacitor with a "equivalent resistor" with a real impedance R equal to the absolute impedance Z of that capacitor, "the same" (RMS AC) current would flow through that resistor as through your original capacitor, and the power supply would work about the same (see ST AN1476 for an example of such a "resistor dropper" power supply).

Does the capacitor waste power as heat?

If the zener were gone and the output was let to float around 50V ...

If you can tweak the resistance of your load, or swap out the dropping cap for one with a different capacitance of your choice, you can force the output to float at close to whatever voltage you choose. But you will inevitably have some ripple.

If the zener were gone and the output was let to float ... would it approach 100% efficiency?

Good eye -- the zener is the part that is part that wastes the most energy in this circuit.

If you assume ideal capacitors (which is a good assumption) and ideal diodes (not such a good assumption), no power is lost in those components. In normal operation, relatively little power is lost in the safety protection resistors. Since there's no where else for the power to go, such an idealized circuit would give you 100% efficiency. But it would also have some ripple.

The "law" that "a voltage regulator always has an efficiency of \$V_{out}/V_{in}\$" only applies to linear DC to DC regulators. That law doesn't apply to this circuit, because this circuit has AC input, and so this circuit can have much better efficiency than that "law" predicts.

I find it counter-intuitive that deliberately wasting some power makes the system perform more efficiently. (Another circuit where adding a little resistance makes it perform better: Ripple current in a linear power supply transformer ).

I wonder if there is some other way to improve the efficiency of this circuit, that is less complex than a 2-transistor switching regulator?

I wonder if further modifying the circuit by adding another capacitor across the AC legs of the bridge rectifier might result in something more efficient than the original zener circuit? (In other words, a capacitive divider circuit like this Falstad simulation ?)

Calculations for a linear power supply

Your basic design is workable, but requires that R1 be small enough that even when the supply voltage is at minimum D1 will be kept in saturation. Variations in supply voltage (e.g. 120Hz hum) will cause the current through D1 to vary, which may in turn cause the output voltage to vary. Performance may be improved by using a three-transistor circuit with negative feedback. Since it sounds like this is a homework assignment, I'll just describe the essentials. Feed power from the source to the load by a PNP transistor Q1 whose base is fed by an NPN transistor Q2 to ground (you may want to experiment with having a resistor between the Q2's base and ground). Use NPN transistor Q3 to implement a circuit which bypass current away from Q2's base when the output is at or above a voltage controlled by a Zener.

Using such a circuit, the current through the Zener will be independent of the input voltage, remaining constant at the level where Q3 starts to turn on. Further, the circuit can work with input voltages that are within a few hundred millivolts of the desired output voltage. It should be possible to implement the basic circuit with the aforementioned three transistors, two resistors (not counting the load), and a Zener. Adding more resistors may improve performance, but the described circuit should work pretty well as a starting point. Note that in this latter circuit one may replace the Zener with a resistor in exchange for less precision on the output voltage.