I am designing a circuit with a DC motor 12V DC Reversible Gearhead Motors – 70RPM and some other stuff including a MCU and a LASER, all driven from a single 12V source and am concerned about big HF noise ripple from the motor (electrical rather than radiative but no harm in reducing both).

I haven't worked much with motors much before, however from reading the articles in this community and some searching elsewhere on the internet, it seems there are a few techniques for dealing with this noise and I was wondering if I could get some educated response on the validity and drawbacks of a few of the techniques that I have encountered.

Looking for a generic answer regarding the effectiveness of the above techniques and perhaps more regarding protection from DC motor noise, not something specific to that motor as that project is actually over, now I am just curious and think it would be useful to have this information available in one spot for future projects and other interested people.

You should always put a capacitor across the motor terminals even if your circuit is not affected, because brush arcing creates rf noise that can interfere with other equipment (eg. AM radios). The usual recommendation is to install two 0.1uF ceramic capacitors, one connected from each motor terminal to the case. This 'grounds' the case to rf without the danger of having an exposed DC connection.

Ripple can be a problem for sensitive equipment which has poor power supply rejection, but normal filter capacitors and regulators will usually eliminate it. Another concern is the current spike and voltage dip that occurs when starting the motor. This motor has a stall current of only 390mA, so provided your 12V supply can handle that you shouldn't have to worry about it. Just make sure that the motor and its control circuit is wired directly to the power source, and run separate wires to the other devices.

It is possible to use shielded wires between the electrodes and the pre-amp without a lot of influence from the shield's added parasitic capacitance (your 2nd dot). The signal itself won't be hurt much because it is very small compared to the common-mode component. To understand this, imagine a tiny differential signal on top of a much, much larger common-mode signal (mostly caused by 50 Hz or 60 Hz mains voltage) and a DC-to-low-frequency component caused by the interaction of the tissue with the electrodes and the body itself. As far as I understand the issue, the interference coupled onto the signal via the cable's capacitance is much worse than having the signal itself fed through the cable capacity.

The trick is to actively drive the cable's shield with the common-mode part of the signal instead of connecting the shield to the pre-amp's ground. Some years ago, I've built such pre-amp with an active guard and was able to use shielded wires as long as 2 m between the electrodes and the first stage of the amp. The schematics can be found in this thesis (not mine, but conveniently includes the most interesting schematics of my EMG amp). Please see fig. 8.7, 8.8 and 8.9 and all the stuff around them in chapter 8. Fig. 8.12 discusses how interference is capacitively coupled onto the signal of interest. Sorry, the thesis is in German, but I hope the images and schematics are international.

A good place to pick up the common mode signal is the "middle" of the gain setting resistor of the initial InAmp (again, see the thesis linked above).

The right leg is used as a reference to measure signal on left leg, left arm and right arm.

The concept of a driven shield can be extended to actively drive the patient, and the connection is made at the location used as a reference for the signals to be measunred, which is the right leg. This is known as a driven right leg (DRL); there's a good discussion about DRL amps in this article by EDN.

If your measurements are not taken from a human body but from some cells in a dish, you can probably put the DRL electrode onto the bottom or into the jelly / growth medium, close to where your reference electrode sits. This way, you use the same strategy as you would in the sense of a DRL setup.

Also, If the hum is really bad, you can put a notch filter at 50 Hz or 60 Hz into the signal path, but this will also hurt the signal of interest.

Very important safety note: The electrodes must not have any direct galvanic connection to protective earth (PE). This is necessary because once the patient gets connected to a potentially lethal voltage by a fault in another device around the lab, the fault current will have a very good path through the patient and via the electrodes to ground. When talking about a ground reference around the electrodes or the pre-amp, be sure to make this a ground referenced to the pre-amp only and not to the real ground usually known as PE! This usually requires an isolation amp somewhere around or just past the pre-amp, or a digital isolator if you wish to have the ADC close to the pre-amp. More about this in DIN EN 60601-1 and other relevant standards.

I'm fishing around a bit and this graph is what I found. It tells you that the sensitivity of the device optically can be significantly changed in the presence of quite small variations of noise on the power line feeding it and this could be magnetically coupled or just a high-frequency loading effect the motor has on the battery which in turn gets dumped onto the sensor via its power wires: - 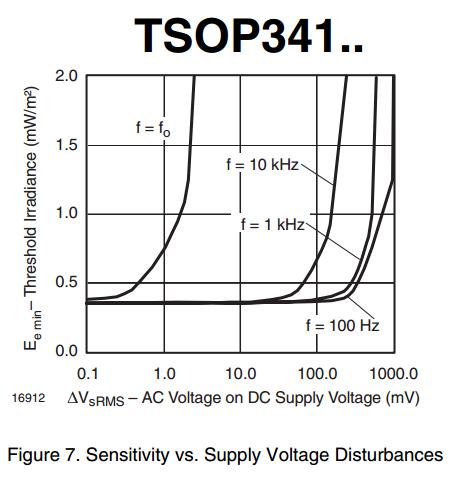 The graph tells me that as the "ripple" voltage on the power supply wires gets higher in frequency, the "effect" it can have becomes more dominant. Shown are ripple disturbances of 1kHz and 10kHz and I can envisage a scenario of 10 mV at 100 kHz having an effect. Even higher in frequency, I would say 1MHz at 1mV is likely to cause problems.

On this basis I'd consider having a local voltage regulator on the device just so the device power supply is kept as clean as possible. I don't know how long the cables are feeding the sensors but maybe if they could be shortened this might help too.

The capacitors you may have tried should not be electrolytic but rather they should be ceramic 100nF types. I'm aware that my answer may be missing the real problem but I'm just reporting worries on reading the data sheet.