I'm currently designing a pcb in EAGLE (v7.4) for a school project and I've included a potentiometer for gain control. However, I will not be placing the potentiometer directly on the board. I want to connect it with a wire to board 1×3 molex connector. This is my current schematic: 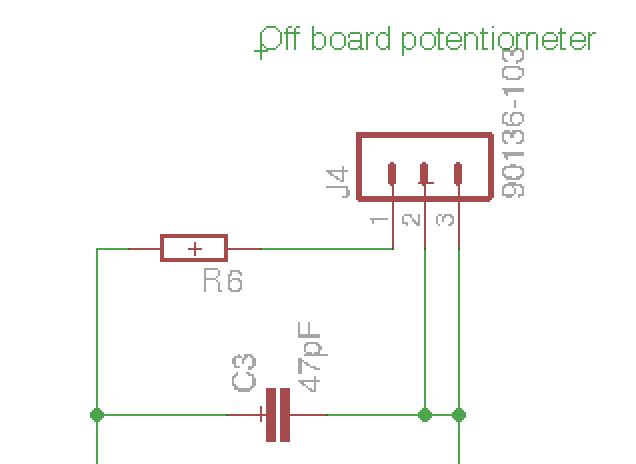 I would like to replace my molex connector symbol with a potentiometer symbol. Is there a way to place virtual components (and replace them with my connector)? This would make my schematic more readable.

You should not do that.

The part that will be placed on the board is a connector.

If you want the schematic to be clear, you should add the value of the pot to the text where you currently have "Off board potentiometer". If you really want a visible clue about the connections of the potentiometer, you could add a symbol, purely using drawing elements showing which pins connect to the ends and the wiper.

Electronic – Adding a small protoboard-like area to a PCB

At some point, with any EDA tool, you're probably going to have to create a custom part for something; so you might as well dive in and create a proto-area part with an array of pads the way you want. You need to make the schematic component for that as well and place it on your schematic.

This is a good technique also for design-specific holes, especially if the holes have to align to some externally defined dimensions. Having a pseudo-component in your schematic to call out those features would make those features "official" parts of your design.

How to place items onto a blank PCB

I usually put the connectors on first -- you'll have three, the two audio jacks, and a barrel connector for your 9v power supply (also known as a "wall-wart"). Obviously, the barrel connect has to match the diameter of your supply plug.

Decide if your two jacks, input and output are going to go on opposite sides of the board (recommended) or side-by-side. Then put the barrel connector at end. If you have a case, this may determine where these components will be located.

If you do have a case, they will be mounted to that, and you will want to run wires to the board. Make them long enough so you can get your fingers between the board and the case to mount the connectors.

If you are not going to be using a case, it is likely the pins on the audio jacks won't be on 0.1" centers, so you can't just solder them to the board. Get some epoxy, and mount the two jacks with the pins sticking out on the sides, and let the epoxy set overnight. Same for the power jack.

Then solder in the LEDs. If you don't have a case, you will want to decide if you want them to be in the center of the board or the elsewhere. If they will be mounted on the top of the case instead of mounting them to the board, you will want to run wires to them. Again make sure they are long enough to allow you to stick the LEDs in the holes in the case.

Finally mount the two pots. Decide where you want them. If the pots are the type with cylinder-like bases, you will need to epoxy them to the board. If they will be mounted on the case, again make the wires long enough so you can mount them.

If you have any big components, like electrolytic capacitors, you would mount those next. But it looks like you don't have any.

After that, I would mount the other components from left to right and (or in your case, top to bottom), starting from your input jack, just like your schematic. That way the connections between components will be the shortest.

I like to use 30-guage wire-wrap wire to connect components together. You will also need a special stripping tool. You can get both at RadioShack.

Your circuit won't draw any appreciable current. If one is wiring up one that does, then you should a heavier gauge for the power busses and ground, perhaps 26. 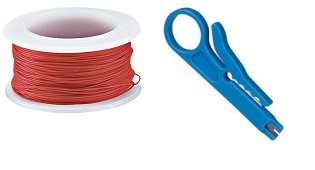 Here's an example of a board wired this way I did a while back. The heavier wires are power busses. The black circle in the middle, and at each corner are rubber feet since the board was designed to sit on a lab bench. If you use those, leave room on the board for them (no wires). 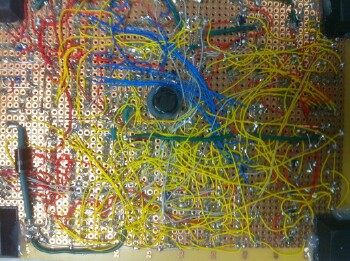 Yes, it did work the first time I plugged it in.