On the Atmel ATmega328P on the Arduino Uno, the ADC RAIN value is 100 MΩ – which I assume is the ADC input impedance. However, in the datasheet it says "The ADC is optimized for analog signals with an output impedance of approximately 10 kΩ or less."

Also – am I even asking the right questions here or am I missing something huge?

In case you are left wondering how the input resistance is spec'd as 100 MΩ, yet the impedance recommended driving for driving the input is 10 kΩ: The following diagram illustrates the input to the ATmega328P A/D: 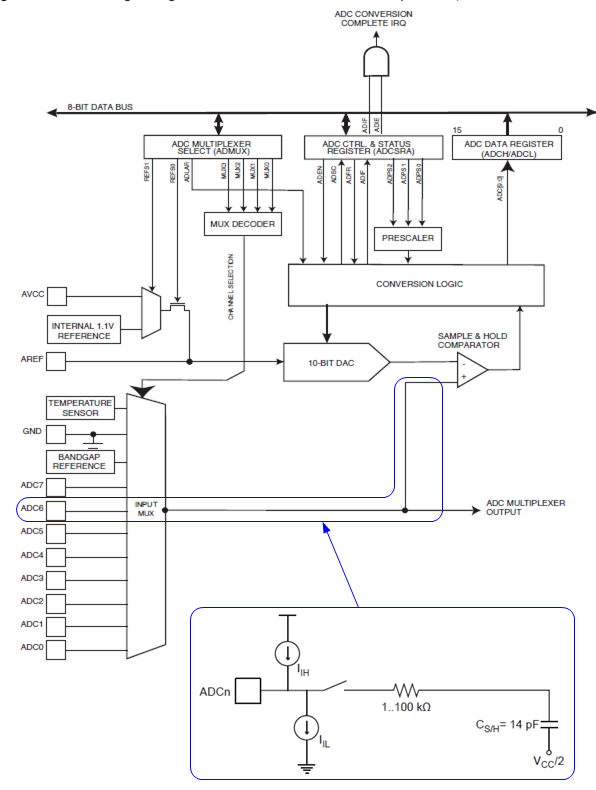 (That "1..100 kΩ" is a vast range, and I would be interested what the range actually is in practice.)

Not shown in the diagram are additional small capacitances associated with the multiplexer. And RAIN is also omitted, as it's insignificant compared to IIH and IIL (max 1μA).

The recommendation that your voltage source be less than 10 kΩ is essentially saying that we don't want the source resistance to slow the charging of CSH (and any other capacitances) significantly compared to the already present resistance, and relative to the sampling time. (However, the "1..100 kΩ" doesn't back that up very rigorously.)

Looking at this from another point of view, the supposed "100 MΩ" input resistance of ADCn pins is not the whole story. RAIN is parallel with IIH and IIL , which, when selected is also parallel with the "1..100 kΩ in series with 14 pF" load.

In the sense that the 100 MΩ || IIH || IIL represent the entirety of the DC characteristics, it is legitimate, but it's not the relevant part of the load for our design purposes. We need to design to drive the "1..100 kΩ in series with 14 pF" AC part of the load, which Atmel tells us is best done with a 10 kΩ source resistance.

(Note that in discussions the term "impedance" may or may not imply that non-resistive AC characteristics are expected, and is sometimes used where what is really meant is "resistance".)

[Edit -- cuz this turns out to be quite interesting...]

You can see that doubling the input R to 200 kΩ, or doubling the A/D clock rate, will chew into the resolution. But a change of input R from 10 kΩ down to 1 kΩ doesn't do us much good... though it could be beneficial for external reasons, like lower sensitivity to neighboring noisy signals.

DAC error? : You say the scope trace is displaying the Arduino's ADC input values BUT you are apparently displaying an analog signal. I assume there is a DAC of some sort in the process to convert the ADC readings back to analog.
The trace gives the appearance of a DAC with a massive error in a mid level bit. eg address bit A2 of the DAC may have a resistor value that is say 10 times too small.

Test: Turn the pot VERY slowly, do the gross steps vanish?
ie do you get a smoothly descending level.
If the level steps down like that at any sweep speed you probably have a bit based error post ADC.
Or, just possibly a microcontroller with a bit error in the IC's DAC hardware (less likely) .

ADC speed: Failing the above -

General web feel is that you can do better than what you are seeing.
If that pot sweep is in say 0.1 second then your gross step rate is about 10 mS.
HOWEVER- there seem to be small declining steps on your waveform - perhaops 10 per gross step, for a ministep of say 1 mS.
Even that is longer than you'd reasonably expect.

Arduino based scope gives an idea of speed expected.

Sounds right to me. I calculate that a 24V input will result in a 4.88V output. But since you are asking, I'm assuming this isn't what's actually happening. Is the voltage you are trying to measure provided by a low-impedance source? Otherwise, you will have to include that impedance as part of R1, or buffer the signal with an op-amp or such.