I'm a bit confused regarding linear supplies and their input currents (i.e. on the input side of the voltage regulator).

To start with, here's a test circuit:

\$R_{bogus}\$ is just to make LTspice happy (all nodes need a connection to ground).
BTW, I guess I should add another input cap for high frequency noise – though that's hardly relevant to this question (and the schematic is just a very rough test circuit anyhow). The goals are 0 – 12 V at up to 2 amps (1.5 would probably be good enough, though).
The voltage source is 230 \$V_{rms}\$ since that's what it'll run on, and the transformer is set to simulate ~15 V RMS, so about 21 V peak.

The problem is, depending on how you view it, too large current spikes, or too high of a voltage drop due to series resistance. Or both, really.

Here, the red voltage is the input to the voltage regulator, and the green/blue is current through two of the rectifier diodes. Note how the voltage is lowered a lot (from 15 Vrms – 2 diode drops) due to the series resistance combined with the 5.5 A current peaks.
This graph is at maximum output current (12 V / 6 \$\Omega\$ load) = 1.87 – 1.99 A due to the output ripple; the input voltage is too low for it to regulate properly due to the drop on the secondary.
Of course, the smoothing caps have peaks similar to the diodes, but lower magnitude (~1.8 A).

Assuming a 1 \$\Omega\$ series resistance on the secondary (as in the simulation above) and 0.11 \$\Omega\$ ESR on the smoothing electrolytics (some ballpark figures I found when searching), I end up with something like the above. With 0.5 \$\Omega\$ on the secondary, the output is great at 12 V and less (the target), but of course the 5+ amp spikes remain on the input side.

So, finally, the questions:

And, though this is pretty much answered by the above:

Short: Add a 1 ohm resistor in series with the transformer :-).

A "perfect" transformer and 'perfect" capacitor will have infinite current spikes, as I know you realise.

While real world results will vary with transformer maker's 'ethos and philosophy', the real world experience is that you wil usually get superior results by adding a small "conduction angle spreading resistor" in series with the transformer winding feed to the capacitors. This is counter intuitive to what you may expect from an efficiency point of view and is often not done in practice. Theoretical calculation of the effect of such a resistor is surprisingly annoying but simulation will show the effects instantly.

Given that the mean DC level under load is 0.7071 ( = sqrt(2) ) of V peak, you have quite a lot of headroom to work with and can afford a modest amount of drop in the series resistance. There are several scondary effects which may be useful depending on environment. Spreading the conduction angle improves the power factor of the otherwise very peaked load - but probably not enough to make a difference in meeting or failing formal power factor requirements. Sometimes more importantly, spreading the conduction angle greatly reduces peak loads on the diodes and reduces EMC issues (ie less radiated electromagnetic noise) - probably not an intuitive effect of adding a few ohms of series resistance.

Lets have a play with some figures:

You have 15 VAC secondary voltage and are aiming at 12VDC at 2A.
Assume for now that about 15VDC minimum on the filter caps is acceptable 9giving the regulator 3V headroom minimum).
Vpeak is 15 x 1.414 = 21.2 V
Load power is VI = 12 x 2 = 24 Watts.
If you managed to filter this well enough to achieve say about 20VDC on the cap you would dissipate Vdrop x I = (20-12)x 2 = 16 Watts in the regulator and "as a bonus" achieve massive ripple CURRENT in the caps but little ripple VOLTAGE. This does not seem like a marvellous idea :-).

If you can manage to spread conduction over 25% of the voltage cycle you will get mean current during conduction down to 4 x Iavg = 8A.

Assuming 21V peak, 25% conduction occurs at about 19V transformer output, and a very useful 50% conduction happens at just under 15V. See graph below. 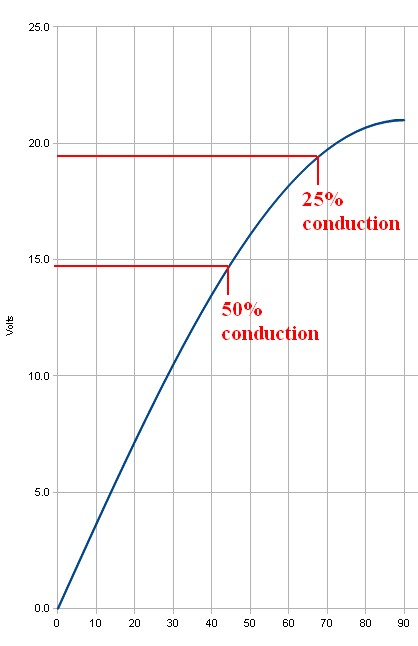 This suggests that inserting even one ohm series resistance is going to have a substantial effect. If the 8A mean that is required for 25% conduction is dropped across 1 ohm the 8 volt voltage drop is going to ensure that the 8A does not happen (as 21-8 = 13V which is lower than the 15V DC target this was based on).

If 50% conduction occurs then mean current during this period will be 4A and mean drop across 1 ohm would be 4V so this may be "about right" as if the filter cap was at about 15V you'd get (21-15)/1 = 6A peak at waveform peak - and as the cap will have "rippled up" in voltage by then you'll get less than 6A). And so on.
Yes, you can analytically work out what happens. But, just put 1 ohm in the simulator and see what happens.

The series resistnce could be in the transformer but then addes to heat generatoion inside a relatively costly component where you'd rather be trying to optimise power transfer rather than heat loss. A 5 Watt 1 ohm resistor will probably work OK here. 10W would be safer due to peaks. eg 4A at 50% = I^2R x 50% = 15=6W x 0.4 = 8W BUT waveform is complex so actual heating needs to be calculated.

Note that in many cases the ripple current rating of two capacitors is superior to that of a single capacitor of equal total capacitance.

As the comments to your question say, you need to find out a suitable capacitor value. You can then see what the valley voltage of your ripple is, add in the voltage drop caused by the rectifier diodes, then arrive at the MINIMUM transformer secondary voltage. You will then select the next highest available transformer secondary voltage, re-do all of the calculations, and finally find out how much heat that you need to get rid of.

Engineering is all about trade-offs. If the available transformer secondary voltage is higher than you like, you can choose a smaller reservoir capacitor such that the worst-case ripple valley voltage is still above the regulator drop-out voltage. This extra ripple translates into less heat wasted in the regulator.

Do note that you must NOT allow the ripple valley voltage to drop below the regulator drop-out voltage or the resulting regulated DC supply will have AC Mains ripple present in the output. That can cause all manner of problems, especially in audio circuits.

Finally, pay attention to the ripple current rating of the reservoir capacitor when choosing a suitable part. Note that the peak ripple current is substantially higher than the DC current output of the supply - the capacitor has to charge in only a small portion of the incoming AC sine-wave waveform.

> In other words, how does the shape of the current waveform affect the transformer V-I ratings?

main Reason: the copper losses will be Pcu=Ipk^2*DCR, for a copper DC resistance DCR. Thus a large cap loaded DC bridge will increase the losses and rise in temp. more than a sine current load for same RMS output power.

2nd reason THe output caps charge just before peak voltage and stop at peak voltage. Thus with 10% ripple that means the current is an amplified sine pulse that only starts near 80 deg and stops at 90 deg at a peak level of 10x the decay current into the load, so it has a 10% pulse width with very fast rise time and 10% sine peak shape, with more than 10 harmonics of 2x the line frequency (even and odd) which for laminated steel with high mu, can result in eddy current losses. Load balance affects VAR utilization on tapped transformers.

3rd reason* if the output is center-tapped and 1 diodes used on each leg, AND only loaded on one leg, say V+ and not V- then this results in offset DC current in the shared core and reduces margin to saturation with DC current flowing thru the core secondary ( from half-wave loading) THus primary saturation can occur sooner if one assumed incorrectly they could get full VA on half wave rectified V+. The VA output must be shared with load balance on each winding to utilize the power.

There are some excitation losses from the primary inductance creating a reactive current about 10% of rated current in order to activate the mutual coupling.

How would one go about determining the proper current rating for a linear power supply transformer?

Use VA rating VA/V*70%=Imax dc max and derate further for lower than 50'C winding temp rise even if sine wave.

My immediate thought would be to approximate the current through the filter capacitor as a periodic sawtooth pulse and find the RMS value of the pulse waveform, then add maybe 50% to account for the fact that the transformer supplies current to the load while the diode is conducting and also to provide a decent safety factor. Is there a better way of doing this?

Breakers near trip Current rating respond in a minute or few. RC low pass filter T= line f/8 thus ~1/10 second so the pulse is too fast to thermally affect breaker or fuse.

Normally Temp rise is the limiting factor with several causes that causes. We expect Voltage output to rise 40% with no load due to sine pk/avg and another 10% due to secondary DCR losses so V_no load will be ~ 50% more than avg.DC at max permissable load. THis makes it very inefficient compared to HF SMPS due to the much lower duty cycle charge periods and long discharge periods, so much greater storage energy and size of XFMR, Cap are necessary.

THere are books by Dr./Prof Keith Billings with easy nomographs that make linear supply design and SMPS design as easy as a recipe for making Won Ton soup. I as a client at Burroughs Inc worked, with him when he was Eng Mgr of Hammond Power Supplies in Canada ca. 80's. He is now in Colorado I believe.