I have got two LMC6001 samples.
I will use them for pH sensor interfacing.
With one LMC6001, I can cope with high input impedance errors.
But I want to set offset voltage near by to 2 V.
Can I make offset circuit with other LMC6001?

You don't need the second opamp. These are typical circuits for offset control in opamps which don't have offset null inputs, like the LMC6001: 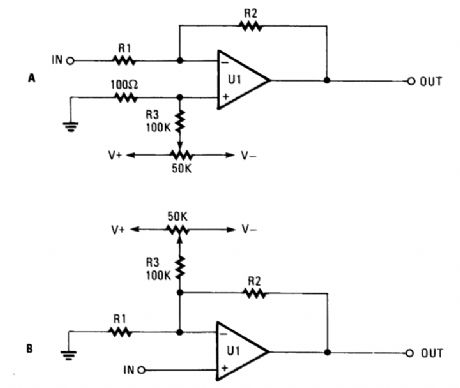 You'll want the lower circuit, because there you can use the fA input current feature of the opamp. The other one has a much lower input impedance.

Electronic – How does this OP-AMP offset voltage measuring circuit work

First, the DUT is in the positive feedback because this way you have an inverting and a non-inverting gain in the loop, so that multiplying them you obtain an overall negative loop gain.

Second, the gain is 1000 because Vin of DUT is Vos*50/(50K+50), so if you consider that V+ of the DUT should be 0, there is only the offset applied, so the feedback forces the output to be 1k times the offset voltage.

I think that you can look at the output this way: suppose that the situation is the one described, and you have a 500uV DUT offset and so 500mV output voltage.

Now, if you try to perturb the Servo Input, the feedback forces the output of the DUT to be almost the same of Servo Input, restoring the same Output voltage.

Note: Voff is the conventional name for input offset voltage, while Vos is the output voltage with Voff applied at the input pins.

The solution set is in error.

To see this, simply insert a series voltage source in either input of the op-amp and determine the resulting output voltage- the magnitude will be as Chaudary says.

The sign of the result is somewhat arbitrary but normally a positive offset is assumed to be driving the amplifier positive at the output, so I would say the sign of the solution set answer is also incorrect.