I am looking to get a hold of small transmitters for use under water (sea water). They will be rigged to my sensor equipment and attached to fish for scientific monitoring, so size is very important.

The transmitters will need to:

My research indicates that my best bet is to build fixed frequency am-transmitters. (Availability, cost, size etc.) with small crystal oscillators. Is this a viable plan or are there better solutions out there?

Also, does anyone know if a setup like this could work under water? Keep in mind that I only need a range of 150 meters.

Since I only need a bitrate of about 512 bits / second per transmitter (I want overhead for more data), would a lower frequency transmitter give me lower power consumption?

There are no size or power restrictions on the receivers.

EDIT:
I am getting a lot of good information. The attenuation in sea water is much higher than I had expected, thanks for the graph.

I see that even my initial plan, using frequencies in the LF-band is out of reach at this range.

1KHz at 20 meters range with more receivers placed seems more realistic, but even this does not look very promising. It seems that EM transmission just isn't that feasible under sea water. Maybe I'll be better off with an acoustic transmitter or some form of passive telemetry.

Yes it sounds interesting and there is some good data on transmitting radio in sea water. Let's start with a graph: - 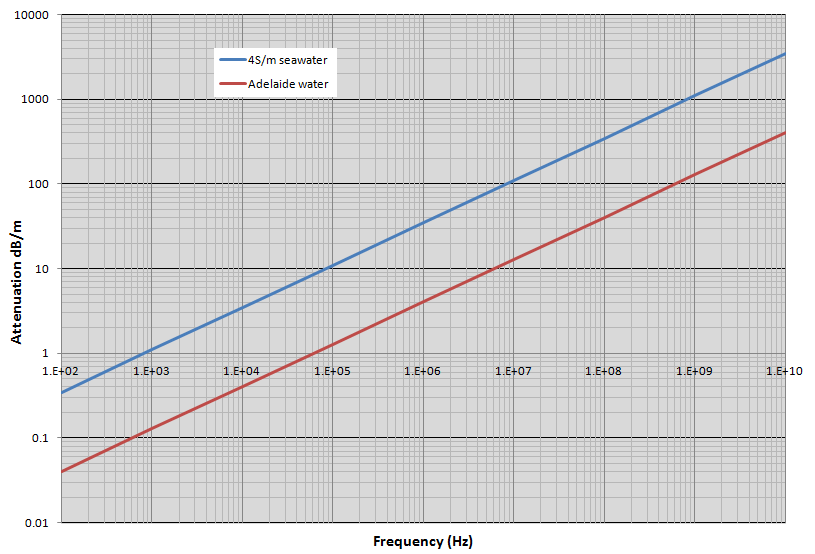 The base of the graph is carrier frequency and the Y axis is attenuation in dB per metre. There are two plots: one is sea water (4 Siemens per metre conductivity) and one is Adelaide (Australia) fresh water (0.0546 Siemens per metre). The graph is derived from this document - it contains the formula for the electric field attenuation as: -

For sea-water, at a carrier frequency of 1 MHz the attenuation is about 33 dB per metre. At 100 kHz this is down to about 10 dB per metre.

It's not looking good. How sensitive can a radio receiver be is the question that now springs to mind and there is a fairly widespread and useful formula that relates data rate to sensitivity: -

To get this level of signal over a link that loses 525 dB means a power input to the fishes transmitting antenna of (525 -130) dBm or an UNFEASIBLE AMOUNT OF TRANSMIT POWER (we are talking 10^36 watts).

For instance, Voyager II from deep space in September 2013 produced an attenuation that was roughly 245 dBm to receive antennas on earth. OK, it transmitted 22 watts with a high gain dish antenna and we used football pitch sized dishes to receive the data but it was do-able.

So, my advise is to have a major rethink and possibly consider using underwater cameras to do what you want OR, if you are still into radio, then a number of localized receivers scattered around the "fish pond".

If you follow this 2nd approach you may be able to use magnetic transmitter coils and magnetic receiver coils. The attenuation of a mag field is a cube law but in the vicinity of 5 metres it should work.

Forget about anything that has MHz or GHz appended to the carrier frequency.

\$^1\$ the formula given above might need some explanation. It comes from realization of what "skin depth" is. As frequency gets higher a current will penetrate less and less into a conductive medium, preferring to stay at the surface. The skin depth at which the current has attenuated to 1/e (8.6859 dB)is: -

The Infrared Data Association (IrDA) was established in 1993, I guess you could call their standards a type of wireless.

For data transmission / reception, one of the less expensive options today is a pre-built module around the nRF24L01+ Transceiver IC. These modules typically offer a built-in PCB-trace antenna, 250 Kbps to 2 MBPS bandwidth before error correction, and are tried and tested.

Most important, they save you time in debugging and antenna tuning. After thousands of people have used these modules, which are built on the manufacturer's reference designs after all, most of the kinks are pretty thoroughly ironed out. Also, being able to tap the experience of many others on the internet who have used such a module, counts for a lot when trying to resolve issues.

For instance, this listing on eBay is for a mere US$2.10 with free international shipping. It uses the 2.4 GHz band, which does not need licensing for low power use in most countries.

Another alternative is this 433 MHz band transmit / receive pair of modules (just 9.6 Kbps though), in case you specifically want to stay with transmit-only and receive-only designs. US$1.99 for the pair makes it pretty attractive.

Of course, in each case, you could as well build your own module starting from the IC manufacturer's reference design, and thus learn while implementing your radio functionality.

It is unlikely that the price advantage of massive volume production can be beaten, though.