I have the option of either using a vertical or horizontal bobbin for a flyback SMPS transformer, and I can't conclusively decide which would be best for minimal radiated interference to be picked up by nearby signal circuitry – of all the EMC/layout related material I've looked at, I have found nothing that mentions specifically this issue directly.

To be totally clear, I'm using 'vertical' to mean perpendicular to the plane of the PCB, and 'horizontal' to mean parallel. Here's a quick diagram – this is not meant to be to scale, just to illustrate the concept: 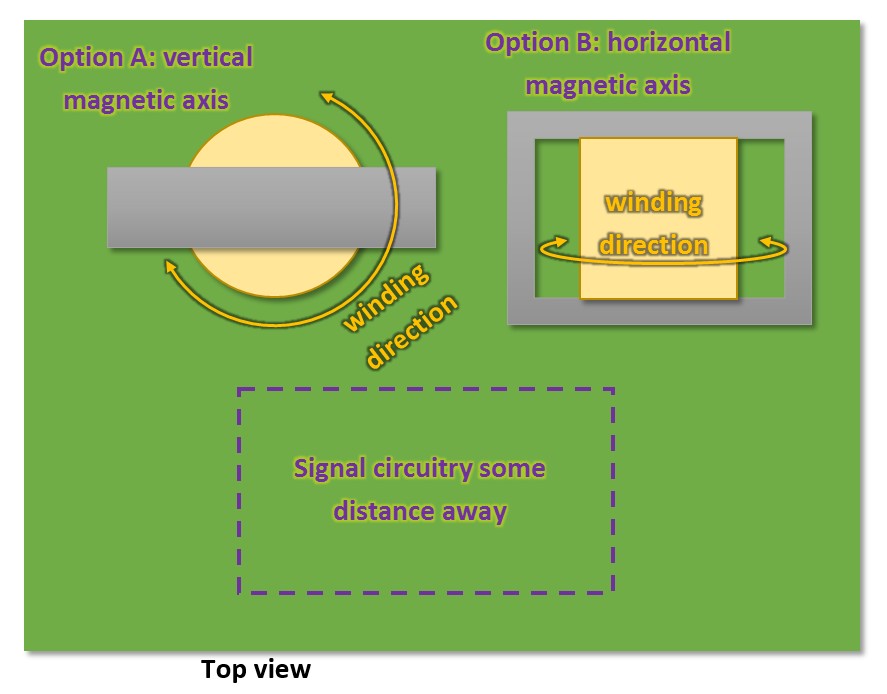 The diagram shows the two transformer options mentioned above, and some signal circuitry which could be anywhere on the same PCB, not directly connected to the transformer.

So far, here are my assumptions – of course please correct anything that may not be quite right: 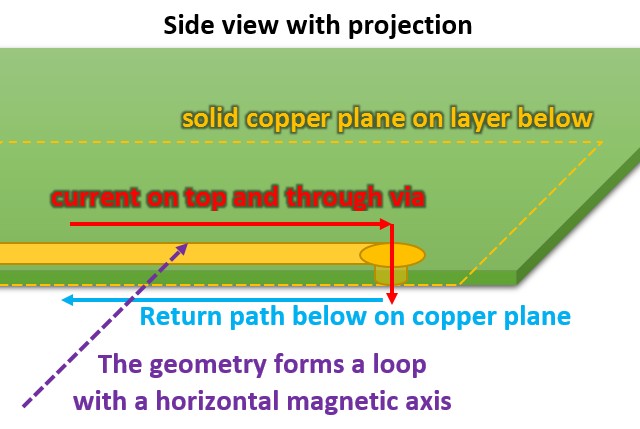 I'm not too confident that I have considered everything that's important, so I'm asking for any suggestons from anyone with more experience for any other relevant factors, anything I've overlooked or otherwise verification whether or not I'm on the right line.

Edit: some further information about the specific project following responses below – I will be using EE cores with a centre gap, and will most likely use a flux band aroud the windings to attenuate radiation, though I don't want to make the question too specialised to this project so it would be nice to establish some kind of general approach for dealing with this situation, as I think it's quite broadly applicable.

Copper tape around the transformer - I've done this to shield the windings on one job that was causing stray radiated emissions that could be picked up - the "straying" magnetic field was measurably attenuated by the tape. Not elegant as a bodge in an EMC lab but it went into production with a more elegant looking shield.

This set of articles has been referenced a number of times on this site and it's quite a good primer. Read through it and decide which goals you are content to optimize for.

Here is an excerpt of the objectives of stackup design:

When using multi-layer boards there are five objectives that you should try to achieve. They are:

If you read through the articles, you'll find that there is no one "best" way to stack up your design. There are just a number of possibilities with different characteristics and tradeoffs.